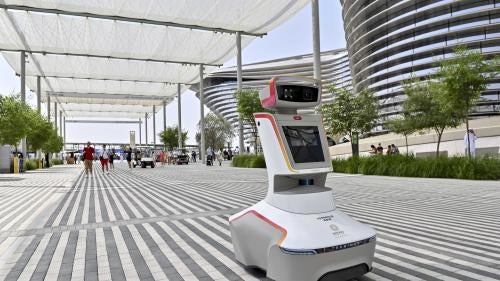 In 2021, United Arab Emirates (UAE) authorities continued to invest in a “soft power” strategy aimed at painting the country as a progressive, tolerant, and rights-respecting nation, yet the UAE’s intolerance of criticism was reflected in the continued unjust imprisonment of leading human rights activist Ahmed Mansoor and others.

The UAE continued to develop its surveillance capabilities, both online and through mass facial recognition surveillance in public spaces. New reports emerged of UAE authorities misusing Israeli spyware to gain access to the private and encrypted communications of journalists, activists, and world leaders.

In 2021, a UAE Interior Ministry official ran as a candidate for president of Interpol and won, an appointment that jeopardizes the global police organization’s commitment to its human rights obligations given the UAE state security apparatus’ long record of multiple abuses.

Scores of activists, academics, and lawyers are serving lengthy sentences in UAE prisons following unfair trials on vague and broad charges that violate their rights to free expression and association.

Ahmed Mansoor, a leading Emirati human rights defender, remained imprisoned in an isolation cell for a fourth year. New details regarding UAE authorities’ persecution of Mansoor emerged in 2021 revealing grave violations of his rights and demonstrating the State Security Agency’s unchecked powers to commit abuses. In July, a private letter he wrote detailing his mistreatment in detention leaked to regional media, sparking renewed concern over his well-being and possible retaliation.

As of September 2021, UAE authorities continued to hold Khalifa al-Rabea, an Emirati who completed his sentence on state security charges July 2018. Al-Rabea was convicted in 2014 based on his ties to al-Islah, which was a legally registered Islamist political movement that the UAE later banned in 2014 as a “terrorist entity.” Authorities arbitrarily kept him behind bars for “counselling,” according to Emirati activists. Authorities also held past their sentences four Emirati dissidents convicted in the UAE 94 trial and who completed their sentences in 2019 and 2020 and two women prisoners who completed their sentences in 2020.

In October 2020, a UAE court sentenced a Jordanian resident of the UAE to 10 years in prison based entirely on peaceful Facebook posts criticizing Jordan’s government.

In late June, UAE authorities reportedly arrested hundreds of African migrant workers from Cameroon, Nigeria, and Uganda, arbitrarily detained them for weeks, and illegally deported them en masse without allowing them to challenge their deportations. Thomson Reuters Foundation reported in September that UAE authorities deported Cameroonians despite their stated concerns about ongoing violence back home.

Especially in cases purportedly related to state security, detainees were at serious risk of arbitrary and incommunicado detention, torture and ill-treatment, prolonged solitary confinement, and denial of access to legal assistance. Forced confessions were used as evidence in trial proceedings, and prisoners complained of overcrowded and unhygienic conditions and inadequate medical care.

Throughout 2021, UAE prison authorities denied detainees living with HIV uninterrupted access to lifesaving antiretroviral treatment, in flagrant violation of their right to health and essential medicines. In at least two UAE prisons, detainees living with HIV were segregated from the rest of the prison population and faced stigma and systemic discrimination. Prisoners living with HIV in the UAE who have been denied adequate medical care are at risk of experiencing serious complications if infected with the Covid-19 virus.

Despite international calls to do so, the UAE refused to allow independent international monitors to enter the country and visit prison and detention facilities.

Despite announcing the withdrawal of most of its ground troops from Yemen in 2019, the UAE continued to play a leading role in a coalition conducting military operations, and continued to provide support for certain Yemeni forces who have committed grave abuses over the past several years. In February, Human Rights Watch reported on the detention of a Yemeni journalist who was first threatened by an official from the UAE and detained and mistreated by UAE-backed forces.

In Libya, the UAE conducted air and drone strikes, some of which killed and wounded civilians. The strikes were in support of the Libyan Arab Armed Forces (LAAF), the eastern-based armed group under the command of General Khalifa Hiftar and one of two major Libyan parties to the armed conflict that began in April 2019.

The kafala (sponsorship) system tied migrant workers’ visas to their employers,  preventing them from changing or leaving employers without permission. Those who left their employers without permission faced punishment for “absconding,” including fines, arrest, detention, and deportation, all without any due process guarantees. Many low-paid migrant workers were acutely vulnerable to forced labor.

The UAE’s labor law excluded from its protections domestic workers, who faced a range of abuses, from unpaid wages, confinement to the house, and workdays up to 21 hours to physical and sexual assault by employers. Domestic workers faced legal and practical obstacles to redress. While a 2017 law on domestic workers guarantees some labor rights, it is weaker than the labor law and falls short of international standards.

The Covid-19 pandemic has further exposed and amplified the ways in which migrant workers’ rights are violated. Tens of thousands of migrant workers lost their jobs and were trapped in the country in dire conditions. Many lived through strict lockdowns in crowded and unhygienic housing. While thousands left the UAE after facing summary dismissals, many struggled to return to their home countries because of travel restrictions and expensive plane tickets, and many were left unable to pay rent or buy food. Many migrant workers also faced unpaid wages for work they had done before being dismissed.

In September, Euro-Med Human Rights Monitor and ImpACT International documented that on June 24 and 25 authorities arrested, detained, and tortured over 800 African migrant workers before the mass deportation of many. The organizations report that the majority were deported despite valid residence visas and/or work permits, and that an unknown number remain in detention.

As one of the world’s top 10 crude oil producers—and a top five per capita emitter of greenhouse gases—UAE is contributing to the climate crisis that is taking a mounting toll on human rights around the globe. The UAE has taken some positive steps to reduce emissions, including increased renewable energy capacity and removing some fossil fuel subsidies. Yet it maintains plans for significant fossil fuel use and production, both for export and domestic purposes.  Its 2020 update to its national climate action plan—which pledges to reduce emissions by 23.5 percent by 2030—is “insufficient” to meet the Paris Agreement’s goal to limit global warming to 1.5°C above pre-industrial levels, according to the Climate Action Tracker.

The UAE is particularly vulnerable to the impacts of climate change including from extreme heat, increased droughts, and sea level rise, requiring the UAE to take steps to protect at-risk populations from their foreseeable harms. Eighty-five percent of its population lives along coastlines that are just several meters above sea level.

The UN Committee on the Elimination of Discrimination against Women commenced its process to review the UAE’s five-year women’s rights record.  While the UAE has made a few reforms, it continues to discriminate against women in law and practice.

Some provisions of the law regulating personal status matters discriminate against women. For a woman to marry, her male guardian must conclude her marriage contract. Men can unilaterally divorce their wives, whereas a woman must apply for a court order to obtain a divorce. A woman can lose her right to maintenance if, for example, she refuses to have sexual relations with her husband without a lawful excuse.

Although changes to the law in 2020 repealed provisions that criminalized extramarital sex, the authorities still make it difficult for unmarried pregnant women to access prenatal healthcare and register their children. Official government websites still require marriage certificates to obtain birth certificates of their children, and health policy directives state that unmarried females should not be offered maternity insurance cover, as well as hospitals that still require marriage certificates for women to access some forms of sexual and reproductive healthcare.

In November 2020, the UAE also repealed an article in the penal code that allowed men to receive lighter sentences for killing a female relative if they found them in the act of extramarital sex. However, the law still allows families of the murder victim to waive their right to see the person punished in return for compensation (blood money) or choose to freely pardon them. In such cases, the accused can be subject to a minimum sentence of seven years in prison instead of life. When family members kill a woman, including in so-called “honor” killings, the victim’s family is also the family of the murderer and is likely to allow men to receive lighter sentences.

The UAE’s nationality law provides that children of Emirati men are automatically entitled to UAE citizenship; however, children born to Emirati mothers and foreign fathers are not.

The government did not take steps to fulfill its commitment, at its UN Universal Periodic Review in 2018, to ban corporal punishment of children in all settings.

In February, the BBC revealed secret videos of Sheikha Latifa, daughter of the Dubai ruler, detailing her alleged forced confinement in a Dubai villa following her abduction and forcible return in 2018. Since May, Latifa was pictured in malls in Dubai and then abroad with friends on Instagram. It is unclear under what conditions she has been granted such freedoms, nor the status of her sister Shamsa who was also subject to abduction and forcible return from the UK in 2000.

Article 358 of the penal code criminalizes a “flagrant indecent act” and any saying or act that offends public morals. A 2020 decree amending the penal code changed the punishment from a minimum of six months to a fine of Dh1,000 to Dh50,000 (US$270-$13,000). If it is a repeated offense, the punishment is up to three months’ imprisonment or Dh100,000 ($27,000). In 2020, the UAE also amended article 356 of the penal code to remove language that had previously criminalized the vague offense of consensual indecency or debasement and was used to punish individuals who engaged in consensual sexual relations outside marriage, or zina, with a minimum one-year prison sentence.

The UAE’s federal penal code punishes “any male disguised in female apparel and enters in this disguise a place reserved for women or where entry is forbidden, at that time, for other than women” with one year’s imprisonment, a fine of up to 10,000 dirhams ($2,723), or both. In practice, transgender women have been arrested under this law even in mixed-gender spaces.

As a party to the armed conflict in Yemen, the US provided logistical and intelligence support to Saudi and UAE-led coalition forces. Human Rights Watch called on the Biden administration in December to end arms sales to the UAE until it takes meaningful steps to end abuses in Yemen and act to hold those responsible for war crimes to account. In February, the Biden administration announced that it would end support for “offensive operations” in Yemen, but in April the administration greenlighted a Trump-era $23 billion arms sale to the UAE that includes highly advanced aerial weaponry.

In September, the European Parliament passed a  resolution calling on its member states not to participate in the Expo 2020 taking place in Dubai between October and March 2022, and for international companies to withdraw their sponsorship due to the UAE’s human rights record.