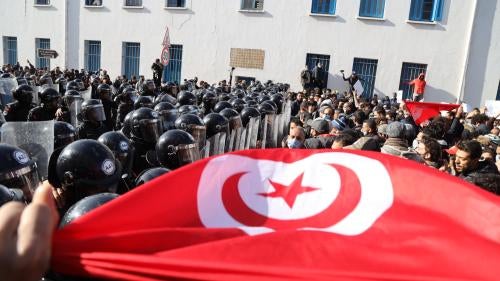 In 2021, security forces continued to use violence to curb socio-economic protests in several parts of the country. In January, police in several cities beat demonstrators, detaining hundreds, many of them minors. Clashes with police in the city of Sbeitla led to the death of a young man. At least two more men died in Sfax and Sidi Hassine during clashes with the police.

On July 25, President Kais Saied announced that he was assuming exceptional powers, following months of political deadlock and a severe economic crisis exacerbated by Covid-19 pandemic.

Saied’s measures encompassed suspending parliament, removing the immunity of parliamentarians, dismissing the prime minister, removing other high-level officials from their positions and assuming oversight of the office of the public prosecutor. On August 24, Saied expanded on the exceptional measures and announced their indefinite extension. On September 29, Saied appointed a prime minister and on October 11 swore in a cabinet of ministers that he had approved.

On July 24, President Saied extended until early 2022 the state of emergency that has been in effect almost continuously since it was first put in place in 2015 following a series of terrorist attacks.

Successive parliaments have failed, since the adoption of the constitution in 2014, to put in place the Constitutional Court, a key independent judicial body tasked with ensuring respect of the constitution. Parliament could not reach the two-thirds majority needed to select its allotted share of judges. President Saied refused in April to sign a law that would have lowered the two-thirds threshold.

Freedom of Expression, Association and Assembly, and Conscience

Members of Tunisian security forces allegedly used excessive violence to suppress protesters denouncing economic hardship and demanding social justice and an end to police repression during nationwide protests that erupted on January 15. Police officers allegedly beat up protesters, arrested hundreds of them, including many minors, fired excessive teargas to break up protests, and attacked journalists. Haykel Rachdi, 21, from Sbeitla, died on January 18 after sustaining a head injury following police intervention during a protest.

On January 17, police in the Mourouj district near Tunis arrested 25-year-old student Ahmed Ghram at his home for Facebook posts criticizing police repression, impunity, and corrupt governance. Authorities accused Ghram of “inciting actions of chaos and disorder.” Ghram spent 11 days in pretrial detention before he was acquitted and released.

More than one year after the publication on June 24, 2020, of the final report of the Truth and Dignity Commission, a state body established in 2013 to expose and investigate systematic human rights abuses that occurred in Tunisia over a five-decade period, the commission’s recommendations to implement major institutional reforms remain unfulfilled. The commission’s recommendations include establishing rehabilitation centers and support services for victims, ensuring effective judicial monitoring of places of detention, and allowing monitoring bodies regular and timely access to places of detention and direct interactions with the prisoners. The government has yet to fulfill its obligations under article 70 of 2013 transitional justice law, which requires it to put in place a plan to implement the recommendations of the commission.

At least 10 women with ties to suspected members of Islamic State (ISIS), released from Libyan prisons and handed over to authorities in Tunisia in March, remain in detention. Some have reported abuse in prison. Fourteen children were also repatriated, 12 of whom have been released to the care of relatives.

At least 16 more women and 19 children suspected of links to ISIS members remain detained in Tripoli’s Mitiga prison, according to the Tunisian Observatory for Human Rights.

Tunisian law discriminates against women in inheritance rights. At time of writing parliament had still not approved a bill supported by the late President Beji Caid Essebsi in 2018, while he was in office, to set equality in inheritance rights as the default. The bill would allow persons to opt out of the equality framework and choose instead to have their wealth distributed according to the previous legal framework.

During a parliamentary plenary session on June 30, 2021, two male MPs physically assaulted Abir Moussi, an opposition MP. She had been the target of a series of verbal and physical attacks in and outside parliament, including gender-specific epithets. The National Associative Coalition for the Elimination of Violence, the Tunisian Association of Democratic Women, and the Tunisian Human Rights League condemned the attacks as gender based.

Despite the 2017 violence against women law, which set out new protection mechanisms for survivors, reports show gaps in implementation of the law particularly in the way police deal with complaints by women of domestic violence. On May 9, 2021,  Refka Cherni, a 26-year-old mother, was allegedly shot dead by her husband, an officer in the National Guard, two days after she went to her local police station to file a complaint against him for allegedly trying to strangle her. According to a spokesperson of Kef First Instance court the police neither arrested nor issued a restraining order against him, after Cherni had decided to drop her complaint.

Maritime operations to intercept or rescue migrants off the coast of Tunisia increased by 90 percent in the first six months of 2021, according to the International Organization for Migration. On September 26, Tunisian authorities intercepted at sea and expelled to the desert at the border with Libya around 100 sub-Saharan African migrants, including children, in violation of prohibitions of non-refoulement and collective expulsions under international and regional law. Due to the continued absence of a national legal framework on asylum, refugees and asylum seekers in Tunisia did not have formal legal status, limiting their ability to access certain services. However, refugees, asylum seekers and migrants were included in the national Covid-19 vaccination campaign that began in March 2021.

Tunisian police officers repeatedly targeted lesbian, gay, bisexual, transgender, and intersex (LGBTI) activists at general protests that took place in January in Tunis against deteriorating economic conditions and the government’s handling of the pandemic and singled them out for mistreatment. Officers arbitrarily arrested LGBTI activists, assaulted them, and threatened several of them with violence including rape and murder. Some used social media to harass and “out” the identity of the activists by revealing private information such as their home addresses and phone numbers, and incited individuals to ridicule and harass them.

On March 4, a Tunis court sentenced Rania Amdouni, a queer and feminist activist, to six months in prison and a fine for “insulting a public officer during the performance of his duty, “causing embarrassment and disruption,” and “apparent drunkenness.” Police arrested Amdouni on February 27 for shouting outside a police station, after officers had refused to register her complaint relating to repeated harassment to which she said police officers had subjected her on the street and online. On March 17, the Court of Appeal in Tunis upheld her conviction and suspended her prison sentence. After her release, Amdouni obtained asylum in France.