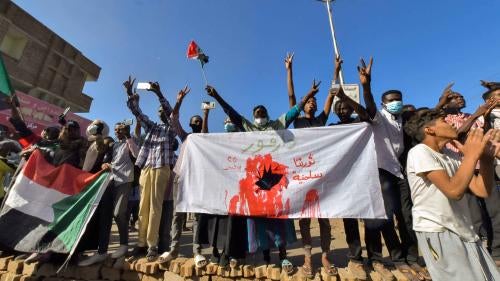 The second year of Sudan’s democratic transition has been marred by political instability that slowed the pace of rights and rule of law reforms, and a dire economic situation that compounded public discontent. The government failed to implement key institutional and law reforms stipulated in the August 2019 constitutional charter, including the establishment of a transitional legislative council and commissions with mandates to address peace, transitional justice, and corruption. In June, in response to growing criticism, Prime Minister Abdalla Hamdok outlined plans to tackle the “national political crisis,” with an emphasis on the need for security sector reform. On September 21, authorities announced that a coup attempt had been quashed in Khartoum, and the prime minister said officers affiliated with former President Omar al-Bashir’s regime were involved.

Notwithstanding progress in eight cases implicating government forces in killings of protesters, justice for serious government abuses has been largely lacking due to broad immunities, an apparent lack of commitment to pursue these cases, limited resources, and the absence of clear prosecution strategies. Government officials reaffirmed their previously expressed commitment to cooperate with the International Criminal Court (ICC) and the Cabinet of Ministers agreed in June to hand over suspects to the court. However, the cabinet and Sovereign Council, which includes military leaders, has to consider the decision at a joint meeting which has yet to be scheduled. It was unclear whether the Sovereign Council would approve the transfers despite the government’s international obligation to do so.

Despite the government’s commitment to protect civilians in Darfur after the departure of the United Nations-African Union hybrid peacekeeping operation (UNAMID) in December 2020, violence in Darfur continued, with a notable increase in West Darfur. There have been killings and widespread displacement of civilians, as well as destruction of civilian property. In 2020, the United Nations Security Council established the UN Integrated Transition Assistance Mission (UNITAMS), a nationwide mission tasked to support Sudan’s political transition and has no mandate to provide physical protection.

Security sector reforms, such as vetting and removal of suspected perpetrators from security apparatuses, failed to move forward. Progress in the implementation of the Juba Peace Agreement, signed in October 2020, between the government and multiple rebel groups, notably the integration of rebel forces into the government forces and the formation of joint forces for Darfur, has been slow.

As a result of conflict in Ethiopia’s Tigray and Amhara regions, over 55,000 Ethiopians fled to eastern Sudan as of August 2021.

On November 21, a deal was signed between now reinstated prime minister and the military, allowing the first to be released from his house arrest and to form a new technocratic government, The deal was rejected by protesters and other political groups.

In January, armed Arab militias launched attacks against internally displaced people from the Massalit and other African ethnic groups, in al-Genaina, the capital of west Darfur, killing around 150 people.

Between April 4-8, another cycle of attacks in al-Genaina killed over 120 civilians according to local doctors, displaced thousands, and left thousands of civilian homes destroyed. Some government forces sided with armed assailants while others failed to intervene. According to the UN, 65,000 people were displaced by the fighting, with around 2,000 fleeing into neighboring Chad.

In May, the Red Sea state in Eastern Sudan witnessed another bout of intercommunal violence which left around five dead and 13 wounded according to state media.

Groups organized protests in Khartoum and other towns against the poor economic situation and delayed reforms. On June 30, police used tear gas to disperse protests against economic reforms that led to high prices.

On May 11, 2021, Sudan armed forces used excessive and lethal force against peaceful protesters gathered in Khartoum leading to 2 deaths. The protests were to commemorate the victims of the deadly crackdown against the June 3 sit-in in Khartoum in 2019. After the reported arrest of 99 army soldiers, at least 7 of whom were charged, the army handed over investigation findings to the then attorney-general. If any further steps have been taken, they have not been made public.

Security forces killed a student in Zalingei, South Darfur, on September 1, during student protests against security forces' refusal to hand over a vacated UNAMID facility, promised to the university.

In response to anti-coup protests, Security forces have repeatedly used excessive force, including lethal force, against demonstrators. Forty-two people were killed in Khartoum between October 25 and November 21 including five children and one woman. Sixteen people were shot dead on November 17, 2021, alone, including a woman and a child, the deadliest response to date.

Despite ongoing calls for justice for serious crimes, accountability for atrocities was limited.

According to the office of the attorney-general, eight cases involving protester killings have been recommended to move to courts this year. At time of writing, there were two ongoing criminal trials in Khartoum and three in Atbara, River Nile State, in which members of the security forces are facing charges of murder and crimes against humanity.

In July, a court in White Nile state sentenced a police officer to death for killing a child during December 2018 protests. Another court in August in the same state sentenced a police officer for killing a protester on December 21, 2018. On May 24, a court in Khartoum sentenced a Rapid Support Forces (RSF) officer to death for the June 3, 2019 killing of a 22-year old protester. A court in El-Obeid, South Kordofan sentenced six RSF soldiers to death over the killing of four students during a protest in 2019.

The committee to investigate the violent dispersal of protests in Khartoum on June 3, in which more than 120 were killed, has not released its findings. Victims’ families and activists have criticized this delay. The head of the committee said he requested technical support from the African Union (AU) to analyze video footage, but that the AU said it lacked the necessary resources and expertise to assist.

Media reported that over 150 bodies were discovered in April in a morgue outside Khartoum, prompting activists and families of missing persons to raise concerns over authorities’ attempt to obstruct justice and tamper with evidence.

On May 24, ICC judges confirmed charges against Ali Mohamed Ali (known as Ali Kosheib, also spelled Kushayb), a former Janjaweed leader who surrendered in 2020. The court announced that his trial would begin on April 5, 2022.

Four suspects sought by the ICC on charges of genocide, war crimes and crimes against humanity committed in Darfur, including ex-President al-Bashir, remain fugitives from the court, although three are currently in Sudanese custody.

In June, then ICC prosecutor Fatou Bensouda visited Darfur for the first time. In an August visit, the new prosecutor, Karim A.A. Khan, signed a new memorandum of understanding with the authorities to facilitate the prosecutor’s access to Sudan and ensure cooperation on all cases in which arrest warrants have been issued, following a memorandum that was signed specifically for cooperation in the Kosheib case. That same month, the Cabinet of Ministers agreed to handover the ICC suspects in custody, including ex-President al-Bashir, to the Hague.

Al-Bashir also is currently standing trial in Sudan, alongside other 27 former officials, on charges of undermining the constitutional order during the 1989 coup against Sudan’s last elected government.

There has been no progress on the establishment of the Darfur special criminal court, which was provided for in the Juba Agreement, signed in October 2020.

On January 11, the former attorney-general issued an instruction limiting the power to arrest and detain civilians to police and prosecution and declaring that arrests made by intelligence or military forces would be considered unlawful. This came after a detainee was killed in RSF custody in December 2020, and activists took to the streets to call for an end to RSF abuses.

On February 23, at a joint meeting of the cabinet and Sovereign Council (serving as the legislative body in the absence of a transitional legislature) ratification of both the International Convention for the Protection of All Persons from Enforced Disappearance and the United Nations Convention against Torture was approved.

On April 24, the joint meeting approved laws on formation of peace, transitional justice, and anti-corruption commissions.

The cabinet of ministers approved a law to ratify the Rome Statute of the ICC on August 3. Ratification requires approval by the joint meeting to take effect.

As the military moved with the coup, security forced rounded up dozens in and out of Khartoum, including at least 30 civilian officials, who were detained in undisclosed locations and with no access to family or lawyers. As part of the November 21 deal, number of detainees were released. At least seven detainees, including a former minister, were charged with sedition and kept in detention, according to their families.

Sudan’s Criminal Act of 1991 in Article 148 continues to criminalize sodomy with punishment of up to life in prison, while Article 151 provides for up to a year in prison for “indecent acts,” including between women.

On January 6, Sudan and the United States signed an agreement normalizing relations with Israel. This follows the decision by the US to lift sanctions against Sudan in 2020.

On May 17, France hosted a donors conference to support Sudan’s transition, attended by heads of governments from the European Union, Gulf and African states, as well international and regional financial institutions. Focused on the country’s economic crisis, Sudan secured international contributions for debt relief and for plans of future investments.

AU-mediated talks on the filling and operation of the Grand Ethiopian Renaissance Dam (GERD) between Egypt, Sudan, and Ethiopia in Kinshasa continued with no results. Sudan said the country would not join any new AU-led negotiations unless experts and observers were given a greater role. The UN Security Council issued a statement in September encouraging Sudan and others to resume talks.