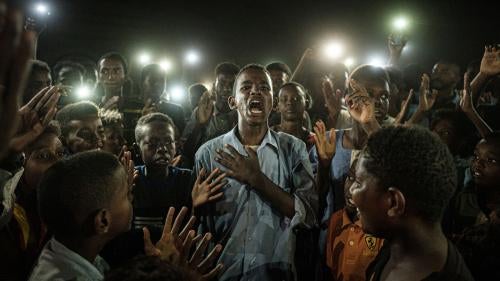 Following months of protests, Sudan’s president for 30 years, Omar al-Bashir, was ousted in April and replaced by a military council. Following negotiations between the military leaders and opposition groups, a transitional government led by a “sovereign council” composed of military and civilian members replaced the military council in August.

The periods of protests both before and after al-Bashir’s ouster was marked by serious human rights violations against protesters, starting December 2018. Government security forces routinely used live ammunition against unarmed protesters, detained activists and political opponents, censored media and blocked access to the internet.  After April 11, Rapid Support Forces (RSF)—the paramilitary force known for attacks on civilians in Darfur since 2013—continued the crackdowns. The bloodiest was their attack on the protesters’ sit-in in Khartoum on June 3.

Conflicts in Darfur, Southern Kordofan, and Blue Nile continued at low levels, and restrictions on humanitarian aid access persisted. In Darfur, government forces attacked villages in Jebel Mara. The African Union/United Nations mission in Darfur (UNAMID) temporarily halted withdrawal plans in June, in view of national political changes and news that the RSF occupied bases the mission handed over to the government. In May, the ruling military council issued a decree stating that all UNAMID bases be handed over to the RSF, in contravention of United Nations rules and procedures.

The agreement to form the transitional government included setting up a national independent investigation into events of June 3. The agreement also called for accountability for all past abuses under the al-Bashir government. Although women played an important role in the protests, women’s rights groups expressed disappointment that few women were included in a transitional government. The government has yet to cooperate with the International Criminal Court (ICC) in respect of cases against al-Bashir and four other men on charges of genocide, crimes against humanity and war crimes committed in Darfur. 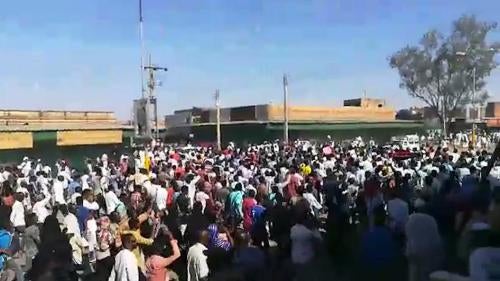 Sudanese took to the streets in towns across the country in December to protest price hikes and demanded President Omar al-Bashir step down. Government security forces responded with lethal violence, shooting live ammunition at unarmed protesters, beating and arresting hundreds and killing scores of people between December and April. Security forces chased protesters into hospitals and shot tear gas into operating rooms, impeding the provision of medical care to wounded protesters. At least one doctor was killed and several others arrested for providing medical services.

President al-Bashir declared a state of emergency on February 22, banning protests and authorizing “emergency courts” to try violators in speedy trials. Many protesters were detained, tried summarily, and imprisoned or fined, without due process protections.

Despite the TMC’s promises to protect the protesters’ camp near military headquarters, security forces continued to use live ammunition against unarmed protesters calling for transition to civilian rule.

On June 3, government forces led by the RSF shot live bullets at protesters, beat them with sticks and batons, rounded up hundreds and subjected them to various forms of humiliation, including beating, rape and sexual assaults. They also attacked hospitals and clinics and prevented wounded protesters from receiving needed medical help. An estimated 120 were killed and hundreds wounded; some bodies were dumped into the river Nile and an unknown number of people were reported missing.

The TMC spokesperson denied government forces attacked protesters and claimed their operation was limited to criminal activity in an area near the sit-in. He later said the dispersal was planned, but that mistakes were made. The attorney-general launched an investigation into the violence and recommended charges be brought against eight soldiers including for crimes against humanity.

On June 30, the anniversary of al-Bashir’s assumption of power, RSF soldiers opened fire on protesters calling for justice for June 3 victims, as they crossed a bridge linking Khartoum and Omdurman, killing eight. Another three bodies were found the next day in Omdurman covered with banners used in protests, with blood stains on their bodies and a megaphone near where the bodies were found. The father of one victim said he believed his son died from torture.

On July 29, RSF soldiers shot at high school students in al-Obeid, North Kordofan protesting price hikes and poor transportation services killing five of them, according to media reports.  On August 1, RSF soldiers reportedly killed four more protesters in Omdurman. TMC immediately denounced the violence, admitting that nine RSF soldiers were involved in the shootings in Omdurman and el-Obeid and that those responsible had been dismissed from service and referred for prosecution.

In response to the protests starting in December, National Intelligence and Security Service (NISS) officials arrested and rounded up protesters, opposition members, and activists. Security agents subjected detainees to abuses while in detention including  beatings, inhumane conditions in a facility known as “the refrigerator,” and insults and beatings during interrogations. Many detainees were not allowed family visitation or access to lawyers. Women released from detention told Human Rights Watch they were beaten and sexually harassed and threatened with rape.

Dozens of students from Darfur arrested in mid-December were rounded up in their dormitories, severely beaten and forced to make televised “confessions” of having links to the Sudan Liberation Movement/Army, a Darfur rebel group led by Abdelwahid al-Nur. They were later released without charges.

On February 3, Ahmed al-Khair, a teacher in East Sudan, died while in NISS custody. Witnesses and his family found signs of torture on his body, according to media. Authorities later charged 40 NISS agents in connection with the killing.

Sudan has failed to investigate other allegations of torture by national security officials and has yet to ratify the Convention Against Torture, which it signed in 1986. In violation of international human rights law, it retains the death penalty and corporal punishment for numerous crimes, including consensual same-sex conduct.

Since protests started in December 2018, authorities imposed even more restrictions on media, seized and confiscated newspapers, arrested journalists covering protests, shut down their offices, and blocked access to the internet.

Nine journalists were briefly arrested on December 26 by the NISS while gathered outside the headquarters of the independent Sudanese newspaper Al-Tayar in protest against harassment of the media. Many other journalists were arrested while covering protests or during journalists strikes. In late December, authorities restricted access to social media for several days.

On February 22, NISS officials arrested the editor-in-chief of Al-Tayar, after he appeared on TV criticizing al-Bashir’s emergency declaration. He was released on March 30 without charge.

After al-Bashir’s ouster, authorities allowed media coverage of protests for several weeks, but on May 31, they shut down Al Jazeera offices. Authorities sought to suppress information about the June 3 violence by restricting media access to the country, by cutting off  completely cutting internet access on June 10 for over a month.

Conflict and Abuses in Darfur, Southern Kordofan and Blue Nile

In January, Sudan declared an open-ended unilateral ceasefire in Darfur and the other conflict zones. However, government forces, including the RSF, reportedly continued to attack sites in the Jebel Mara,  destroying dozens of villages between July 2018 and February 2019, according to reports.

UNAMID halted plans to further downsize and exit Sudan by 2020, in view of the formation of transitional government after al-Bashir ousting and the occupation and use of the mission’s bases by RSF soldiers. Authorities continued to limit peacekeepers and aid groups’ access to displaced people and conflict-affected areas.

Eight years into the armed conflict in Southern Kordofan and Blue Nile, the government and armed opposition failed to agree on modalities for supplying life-saving aid to civilians in need. However, negotiations between the government and all armed groups resumed in Juba in September leading to new agreement on access.

Sudan hosts about 1.1 million refugees and migrants from the region, mostly South Sudanese (more than 858,000 as of September). Authorities also reported an increase of Eritrean refugees,  estimating that half of these new arrivals migrate to other countries,  making them vulnerable to human trafficking and smuggling. Hundreds of thousands of Sudanese refugees from Darfur, Southern Kordofan and Blue Nile live in camps in Chad, South Sudan and Ethiopia.

Hours after the June 3 crackdown, the African Union condemned the violence and called for an “immediate and transparent investigation” into the events, to hold those responsible to account. On June 6, the AU suspended Sudan’s membership, but lifted the suspension in September.

The US, United Kingdom, and Norway, troika members, condemned the attacks on protesters and blamed the TMC for ordering it. The US, which lifted economic sanctions on Sudan in 2017, has promised to revise its Sudan policy with a view to supporting the transitional government.

The EU also condemned the June 3 violence against protests and in late July suspended projects related to migration and border control, which are part of the EU-Horn of Africa Migration Route Initiative, known as “Khartoum Process.” The program had prompted fears that EU was supporting the RSF to carry out-migration control.

The UN secretary-general, following the establishment of the transitional government in August, called for the lifting of all economic and financial sanctions imposed on Sudan, as well as the country’s removal from the US list of state sponsors of terrorism.

In September, the UN Human Rights Council adopted a resolution to continue the work of the Independent Expert on human rights in Sudan for another year. The resolution also supported the establishment of a country office of the Office of the High Commissioner for Human Rights in Khartoum, Sudan’s capital.

In October, the UN Security Council adopted a resolution extending UNAMID’s mandate for one year and tasking UN secretary-general along with AU chairperson to submit options for a post-UNAMID follow up presence based on needs and views of Sudan government after March. The mission will maintain its protection of civilians and human rights-monitoring functions through the end of its mandate.

The TMC declined to hand al-Bashir over to the ICC but try him in Sudan in on corruption and money laundering charges. The UN Security Council failed to press Sudan to cooperate with the ICC for the surrender of the al-Bashir and four other fugitives sought on alleged Darfur crimes, despite having referred the situation to the ICC in 2005. The ICC first announced charges in 2007.