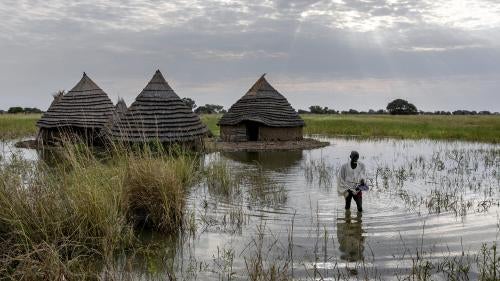 Intercommunal conflict, abuses by security forces and armed groups, and entrenched impunity continued to take a heavy toll on civilians. Covid-19 and severe weather conditions also contributed to a dire humanitarian situation, with the United Nations declaring that the country faced the worst levels of food insecurity since independence.

The parties to the peace deal failed to implement major provisions of the agreement, including security arrangements and the establishment of accountability mechanisms. While the government approved the establishment of these accountability mechanisms in January, including a hybrid court, at time of writing the government had taken no concrete steps to operationalize the court.

While the government, the Sudan People’s Liberation Movement/Army in Opposition (SPLA/IO), the National Democratic Front and non-signatory groups to the 2018 peace deal, recommitted themselves to a ceasefire in March, there were multiple violent incidents between the main signatories.

The government failed to rein in its abusive national security agency, including by reforming the agency’s legal mandate. Authorities continued to arbitrarily detain critics, including members of civil society and journalists, often holding them for extended periods without charge or trial.

School closures due to the Covid-19 pandemic affected 1.5 million children. After the pandemic’s start in 2020, schools were closed or partially closed for 378 days, including from January to early May 2021.

In June, the UN reported that more than 80 percent of civilian casualties in the country were attributed to intercommunal violence and community-based militias. Intercommunal fighting, cattle raiding, and revenge attacks between armed youth groups in Central Equatoria, the Greater Pibor Administrative Area (GPAA) in Jonglei, Lakes, Unity, Western Bahr el-Ghazal and Warrap states resulted in hundreds of deaths and injuries, displaced hundreds of thousands, and led to the suspension of humanitarian services in some areas.

In Upper Nile, tensions over the status of Malakal town persisted. On March 27, members of the internally displaced community, many residents of the town’s protection of civilian site, were attacked by suspected Dinka Padang militia in Malakal town as they travelled to meet the newly appointed Shilluk governor. Four civilians died and 7 were injured in the attack.

In Jonglei, intercommunal violence displaced about 20,000 people in the Greater Pibor Administrative Area with an estimated 68 people killed and 27 injured in early May when allied Gawaar Nuer and Dinka from Ayod, Uror and Duk marched into the GPAA to retrieve cattle raided by the Murle.

In Greater Equatoria, there was violence over land rights, cattle migration and fighting took place between the government forces and the National Salvation Front (NAS) .

In Tambura, Western Equatoria state, violence broke out in June between government forces, SPLA/IO forces and community militias, resulting in killings of civilians. The violence displaced approximately 80,000 civilians, including into neighbouring countries, and hampered humanitarian assistance.

Impunity remained widespread, with only a handful of cases of security forces being tried for sexual violence related crimes in front of military court or in civilian trials.

Child marriage remains widespread. In late 2020, United Nations Children’s Fund (UNICEF) reported that more than half (52 percent) of South Sudanese girls between the ages of 15 and 18 are married, with some marrying as young as age 12.

South Sudan’s Penal Code Act of 2008 criminalizes consensual same-sex conduct, for both women and for men. Article 248 entitled “Unnatural Offences,” outlaws “carnal intercourse against the order of nature” with up to 10 years’ imprisonment and stipulates that such “may also be liable to a fine.” The code also criminalizes sex work.

Aid workers continued to be attacked, hampering greatly needed aid efforts, with the UN warning that South Sudan was becoming one of the most dangerous places for humanitarian workers to operate.

In January, a humanitarian worker was shot dead while returning from his work supporting vulnerable families near Bentiu. In February, a group of unknown gunmen attacked a humanitarian vehicle carrying polio vaccines between Rumbek Centre to Rumbek North in Lake state killing three health workers and injuring four others.

In May, a female aid worker from Cordaid was shot dead in Budi County, Eastern Equatoria state. On May 21, Dr. Louis Edward, an IRC health worker died inside a health facility in Ganyliel Payam, Panyijiar County, in “unclear circumstances.”

On the eve of the planned protest, the government shut down internet across Juba and its suburbs for a day.

In February, Amnesty International reported on the government’s abusive physical and communications’ surveillance capacity and how it is being deployed without safeguards, creating a pervasive climate of fear and self-censorship among citizens.

In late January, the cabinet approved the implementation of the Chapter V accountability mechanisms provided for in the 2018 peace agreement, including the establishment of the Hybrid Court for South Sudan, a Commission for Truth, Reconciliation and Healing, and a Compensation and Reparations Authority. While in May the government established a committee to conduct consultations around the enabling legislation for the truth commission, at time of writing, the government had taken no concrete steps to operationalize the hybrid court.

Between April and June, on the orders of the Warrap state governor, security forces executed at least 21 people accused of murder, theft, and other offenses, including in the towns of Kuajok, Romic, Alabek, Twic, Aliek, and Warrap. This included the summary execution of at least eight suspected criminals, including two children, in Kuajok and Nyang Akoch. UNMISS also documented the executions of 29 males in the state, including boys and elderly men.

In September, the UN Commission on Human Rights in South Sudan reported that South Sudanese political elites had  diverted US$73 million since 2018, undermining the promotion of key  rights and directly contributing to ongoing conflict. The Commission noted that the government deliberately limited independent oversight of oil revenues to facilitate the misappropriation of public funds.

On April 10 President Kiir, with apparent disregard for the many crimes committed by the NSS, promoted one of its top officials, Akol Koor Kuc, to the rank of First Lieutenant General. In the same reshuffle, Kiir appointed Santino Deng Wol, a man sanctioned by the UN for his role in a May 2015 offensive in Unity State, during which government forces killed dozens of women, children, and older people, and looted civilian property, as the new army chief of staff.

In May, the UN Security Council renewed the arms embargo, travel ban and assets freeze imposed on South Sudan for another year and extended for 13 months the mandate of the panel of experts, despite government lobbying against the renewal. The resolution requires South Sudan to achieve progress on five key benchmarks including: progress on disarmament, demobilization and reintegration; progress on properly managing existing arms and ammunition stockpiles; and the implementation of the Joint Action Plan for the Armed Forces on addressing conflict-related sexual violence.

UNMISS continued to handover protection of civilian sites to the government, with the handover of Bentiu in March. Malakal retained its status as a result of “a volatile security situation.”

In March, the European Union sanctioned South Sudan Army Gen. Gabriel Moses Lokujo over human rights violations, including extrajudicial executions and killings, in connection with his defection from the SPLA/IO to the government forces. The United States extended its recognition of a state of emergency for South Sudan, thereby extending related sanctions.