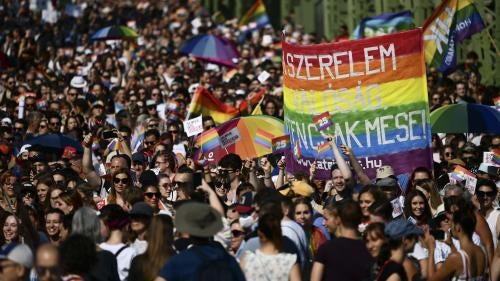 The government continued its attacks on the rule of law and democratic institutions in 2021. It also prolonged a state of emergency due to the Covid-19 pandemic, allowing it to rule by decree, including by imposing restrictions on freedom of assembly and access to public information.

The government continued its attacks on members of the lesbian, gay, bisexual and transgender (LGBT) community, harassment of independent media, and its discrimination of the Roma minority and undercut women’s rights. Access to the asylum procedure remains close to impossible.

Attacks on Rule of Law

The “state of danger”—a special legal order granting overwhelming power to the executive to rule by decree—initiated in March 2020 in the context of the Covid-19 pandemic and extended in December 2020 and June 2021 was effectively still in place at time of writing. Under the special legal order, government may use decrees to suspend application of acts of parliament, derogate from provisions of acts, and take other extraordinary measures. Since March 2020, the government issued over 250 decrees, most, but not all of them, related to the pandemic. A law adopted in May 2020 in the context of the Covid-19 pandemic gives the government power to unilaterally declare future public health emergencies, extendable every six months, which allows it to issue decrees pertaining to public health with minimal or no parliamentary or judicial oversight.

The government continued its harassment of independent media and freedom of expression. Most media outlets are directly or indirectly controlled by the government which has a chilling effect on independent journalism.

In June, the Supreme Court upheld a September 2020 decision by the Media Council, and revoked the frequency for Klubradio, an independent radio station in Budapest. Klubradio was pushed off air in February. In August, the radio station turned to the Constitutional Court, arguing that the stripping of its frequency by the Media Council was unconstitutional. The case was pending at time of writing.

In July, Hungarian independent journalists who report critically on the Hungarian government were named on a leaked list of targets for Pegasus phone spyware, and at least one journalist’s phone was subsequently determined to have been compromised by the software.

The government continued its attacks on academic freedom during the year. In May, the government pushed through a law to privatize public resources and public universities by creating “public trust funds performing a public function” and designated 32 entities, of which most manage higher education institutions, as universities. The entities receive large amounts of public funds and assets, members of governing bodies are loyal to the ruling party, and public scrutiny is impossible.

Long-standing neglect of the public health care system and deficiencies in Hungarian hospitals, including lack of basic items such as hand soap and sanitizer, during spikes in Covid-19 cases may have contributed to high death rates—the highest per capita rate in the EU in the period from January/February 2020 to September 2021. By September, over 30,000 Covid-19 deaths were recorded. The vaccine rollout, which started in December 2020, alongside lockdowns and other restrictions, curbed the spread, drastically reduced cases, hospitalizations, and Covid-19 related deaths.

Workplaces and schools continued to discriminate against Roma and many Roma live in abject poverty. At the early stages of vaccine rollout, authorities effectively excluded many Roma as registration for vaccine appointments was only available online and many Roma lack internet connectivity or have inadequate technical knowledge and digital literacy to navigate the internet. Local authorities in many cases failed to provide proper information and assistance to Roma for vaccine registration; instead, local activists in Roma communities aided residents to register online. The lack of devices and connectivity significantly impacted Roma children’s ability to access distance learning during school closures, further entrenching existing education inequalities.

The government continued to restrict the rights of LGBT people. Transgender people are not legally allowed to change the gender markers on their identification documents. In December 2020, the parliament adopted a law that states that only married couples will be eligible to adopt children, with the minister in charge of family policies able to make exceptions on a case-by-case basis. It effectively excludes same-sex couples, single people, and unmarried different-sex couples from adopting children. A constitutional amendment adopted at the same time includes language that stigmatizes transgender people, stating that “children have the right to their identity in line with their sex at birth” and rejects diversity and inclusivity by mandating that children’s upbringing should be “in accordance with the values based on our homeland’s constitutional identity and Christian culture.”

In June, a new law falsely conflated pedophilia and homosexuality, prohibiting discussion of gender identity and sexual orientation. The law targets content “promoting” or “portraying” sexual and gender diversity, putting health providers, educators, artists, and broadcasters at risk of sanctions, including financial and administrative penalties. An implementation decree in August put restrictions on shops selling products “promoting” or “portraying” sexual and gender diversity, banning all such sales within 200 meters of places frequented by children, and in all other cases required shops to separate those products in sealed packages.

The country saw a significant decline in asylum applications in 2021 due to border closures. Pushbacks from Hungary to Serbia, sometimes violent, continued. The two transit zones on Hungary’s border with Serbia remained closed. In August, Hungary airlifted at-risk Afghans from Afghanistan, and per Covid-19 protocols, quarantined them in the non-operational transit zones. Activists reported that instead of processing airlifted Afghans under asylum law, authorities consider their cases under the aliens policing act, as illegal migrants.

In June, the European Court of Human Rights ruled that pushbacks on Hungary’s border with Serbia were a breach of the prohibition of collective expulsion. According to official police statistics, border officials have carried out at least 72,000 pushbacks since July 2016.

The government and ruling party members continued to smear human rights defenders, using government friendly media to claim they are part of a wider Soros network and describe them “Soros mercenaries” or “national security risks.”

In April, in response to a 2020 Court of Justice of the EU ruling that held a 2017 law forcing civil society organizations receiving more than €20,000 (around $23,000) to declare themselves as foreign funded to be in violation of EU law, the governing majority adopted a bill to repeal it. The repeal bill however failed to address the criminalization of organizations aiding asylum seekers and migrants, which the EU Court of Justice also found in breach of EU law in a separate ruling in November 2021.

The Hungary chapter of the 2022 World Report has been corrected to clarify three points: 1) the May 2020 law adopted in the context of the Covid-19 pandemic gives authorities power to declare future health emergencies, which would allow to it issue decrees on public health matters without oversight. 2) The limitation on adoption introduced in December 2020 restricting it in most cases to married couples was made by a law, while the language stigmatizing transgender people was contained in a constitutional amendment. 3) The Hungarian law requiring organizations to declare if they receive foreign funding and another law criminalizing assistance to asylum seekers and migrants are the subject of separate rulings by the EU Court of Justice.