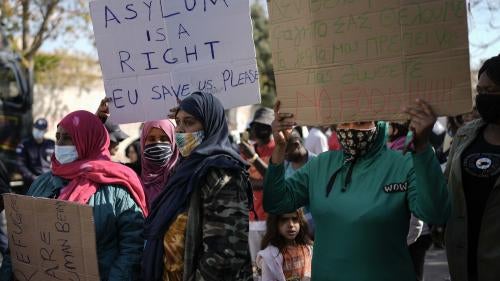 Greece hosts large numbers of asylum seekers while failing to protect their rights, including by pushing new arrivals back to Turkey. Migrant children face homelessness and lack of access to adequate healthcare and education. Victims of hate crimes are reluctant to report attacks to the police. Authorities failed to address rising violence against women and instituted measures that could heighten risks for some domestic violence survivors. Curbs on civil society groups assisting migrants and interference with independent media raised concerns about the state of rule of law in the country.

The government continued its heavy-handed and often abusive immigration controls. There was a mounting chorus of criticism of Greece’s practice of summarily returning thousands of people to Turkey, including through violent pushbacks.

In April, the Greek ombudsman released an interim report as part of an investigation launched in 2017, criticizing authorities for failing to adequately respond to multiple allegations of pushbacks at the Greek-Turkish land border. In May, Council of Europe (CoE) Commissioner for Human Rights Dunja Mijatović urged authorities to end pushbacks at both the land and sea borders with Turkey, and to ensure independent and effective investigations. In July, EU Commissioner for Home Affairs Yilva Johansson warned Greece to end pushbacks, describing them as “violations of our fundamental European values.”

Greek officials deny the allegations, and authorities regularly fail to carry-out proper investigations into pushbacks. The media reported in September that the European Commission asked Greece to set up an independent mechanism to monitor abuses at borders before it releases €15.83 million (around $18 million) in EU migration funding.

In May, the office of Greece’s Supreme Court prosecutor transmitted a criminal complaint concerning 147 pushbacks between March and December 2020, filed by Helsinki Monitor, to 16 first instance prosecutors across Greece for investigations. Several other complaints regarding pushbacks and violations by Greece border forces are pending before the European Court of Human Rights.

In June, Greece expanded the use of inadmissibility procedures on the basis that Turkey is a “safe third country” to asylum seekers from Afghanistan, Somalia, Pakistan, and Bangladesh threatening to leave thousands of people in limbo, denied protection in the EU, and unable to return to Turkey as the country has not accepted returns from Greece since March 2020. These nationals represent more than 65 percent of asylum seekers in the country. Syrians have been subject to the same rules since 2016.

Nongovernmental groups (NGOs) said in July the new rules had already resulted in people being denied protection within days of their arrival, following perfunctory asylum interviews, without legal representation. More than 2,800 people were denied protection on that basis in 2020. On August 25, an appeals committee rejected the return of an Afghan family which had been refused asylum, ruling that Turkey could not be considered a safe third country for them. In June, Commissioner Johansson urged the Greek authorities to reverse the inadmissibility decisions for those who cannot be returned and examine cases on their merits.

A law that threatens asylum seekers’ rights was adopted in September. NGOs and the CoE commissioner for human rights raised the alarm over the law, which undermines the right to asylum and weakens safeguards against detention and return to the risk of persecution or other human rights abuse.

During the year, the European Court of Human Rights issued interim measures for at least 13 cases regarding living conditions for vulnerable people trapped in migrant camps on the Aegean islands, requesting the urgent transfer of individuals and their families into safer accommodation, and their immediate access to urgently needed medical care. In most of the cases, authorities have failed to act.

One year after the Moria camp on Lesbos burned down, there was little progress towards improving living conditions for migrants there. Although thousands were relocated to other parts of Greece, more than 4,000 remained at time of writing on the Aegean islands, including 3,819 contained in camps. In May, the CoE commissioner for human rights warned that the government’s plan to build new closed reception centres created a risk of large-scale, long-term detention. The first such center opened on Samos at the end of September.

In January, limited government soil testing confirmed dangerous levels of lead in some areas of one of the camps on Lesbos, Mavrovouni, built on of a former military shooting range. Despite the government taking some positive steps to address the situation, including fencing off an area with elevated lead levels, at time of writing, dozens of residents continued to live in tents in areas contaminated by lead. Authorities ignored calls to conduct comprehensive testing and remove all residents living near lead-contaminated areas.

By mid-October, 1,047 unaccompanied children and 3,416 others deemed vulnerable had been relocated from Greece to other EU and associated countries, including 2,812 to Germany.

In a January landmark decision, the European Committee of Social Rights found that Greece violates the rights of asylum-seeking children, citing inadequate, unhealthy, and dangerous living conditions, homelessness, and inadequate access to healthcare and education.

Data on school closures in Greece linked to Covid-19 underscored significant disruption to education for children in the country during 2021. According to the ombudsman for children’s rights, only one in seven asylum-seeking children living in camps on the mainland, and none on the islands, was able to attend school in the 2020-2021 school year. During school closures, no Wi-Fi hotspots, tablets, or laptops were provided to children in camps. Some camps were locked down to prevent the spread of Covid-19, with children unable to leave for school and no alternative education provided. In some cases, local officials prevented children from enrolling in public schools in nearby communities. There were persistent delays in opening classes for children who do not speak Greek.

By mid-August, 21 unaccompanied children were detained in police-run facilities despite Greece’s abolition of the so-called “protective custody” regime in December 2020. No government statistics have been published since then on child detention.

Greek authorities’ use of criminal investigations to harass and intimidate groups that investigate abuses against migrants at Greece’s border continued.

News emerged in July that 10 individuals, including 4 members of NGOs, are facing criminal investigation for allegedly facilitating the irregular entry of foreign nationals from Turkey to Lesbos. No indictment was issued following a similar investigation announced in September 2020, suggesting that it was a form of state harassment.

In March, three UN special rapporteurs addressed a joint letter to the government expressing concern about 2020 regulations hampering the work of NGOs focused on asylum and migration. According to a May report from NGO Refugee Support Aegean (RSA), since December 2020, 78 groups have had their applications rejected and another 97 have pending applications on the NGO Registry. Most provide services in camps for asylum seekers. Judicial review applications challenging the legal framework are pending before the Council of State.

In its July EU-wide rule of law report, the European Commission expressed concern about the narrowing space for civil society groups working with migrants and asylum seekers. It also said that despite reforms in the judicial system, concerns remain around the procedure of appointinga senior judges and prosecutors.

In September, the CoE human rights commissioner urged the Greek parliament to reconsider legislative proposals that hinder “life-saving” work and human rights monitoring by NGOs. The bill, which was adopted on September 3, introduces restrictions and conditions on NGOs active in areas of competence of the Greek Coast Guard, at the threat of heavy sanctions and fines.

At the end of 2020, journalist Dimitra Kroustalli resigned from the daily newspaper To Vima, citing “suffocating pressure” from the prime minister’s office following a story she had written on the government’s flawed monitoring of Covid-19 cases.

The European Commission flagged concerns about attacks and threats against journalists in Greece in its July rule of law report, in particular the killing of Greek investigative journalist Giorgos Karaivaz. At time of writing, no arrests had been made related to Karaivaz’s murder.

In January, the citizen protection minister unveiled guidelines to implement a controversial 2020 law regulating demonstrations, which journalists are concerned will restrict their ability to report effectively.

In April, Reporters Without Borders (RSF) raised concerns about restrictions on media freedom in Greece, including the withholding of government advertising from critical outlets, accusations of government censorship, as well as violence and harassment of journalists by police during demonstrations.

Statistics on hate crimes for 2020, released in April by the nongovernmental Racist Violence Recording Network (RVNR), showed an increase in incidents of racist violence against refugees and migrants, and attacks on civil society groups working with them. The RVNR recorded racist incidents in the context of police enforcement of Covid-19 movement restrictions. The RVRN also recorded 30 incidents of verbal assault, physical violence, or sexual assault against individuals based on their sexual orientation or gender identity. Of the 107 incidents of hate crimes documented by the RVRN, only 35 were reported to the police. In 46 incidents, the victims said that they would not take further actions due to fear, lack of trust in the authorities, or bureaucratic obstacles.

Police statistics published in May on fines for breaches of Covid-19 measures on the islands of Lesbos, Chios, and Samos showed that between March 23, 2020 and May 24, 2021 74 percent of the fines were issued against foreigners, despite the fact foreign nationals make up a small percentage of the islands’ population, raising concerns about the use of ethnic profiling, a long-standing issue in Greece. Covid-19 movement restriction measures in camps across the country were stricter than for the general population.

The trial of six people, including four police officers, for causing fatal bodily harm in the 2018 killing of 33-year-old queer activist and human rights defender Zak Kostopoulos resumed in October after being postponed in October 2020 due to Covid-19.

Violence against women was the subject of heated debate during the year, after Olympic medalist Sofia Bekatorou alleged in January she had been sexually assaulted in 1998 by an official of the Greek sailing federation, triggering a national “#MeToo” movement.

In May, government passed a controversial family law, despite the risk that the law poses to women and children who are victims of domestic violence.

In March, nongovernmental group Diotima noted that during the pandemic there was an increase in reported incidents of domestic and other gender-based violence. At least 11 women have been murdered by their current or former husbands or partners in the first nine months of the year. The killings shocked the public, opening a debate on the issue of domestic violence. Women face multiple barriers to reporting domestic violence and seeking help from the state.