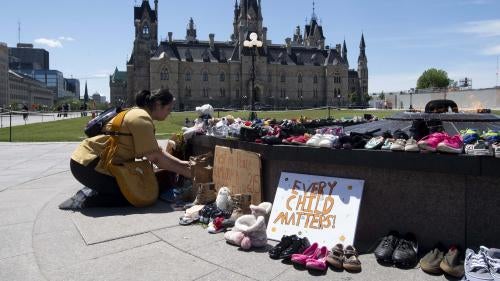 Since assuming office in 2015, the government of Prime Minister Justin Trudeau has made notable efforts to advance human rights in Canada. Despite progress, serious domestic and foreign policy challenges remain. These include wide-ranging abuses against Indigenous peoples and immigration detainees, including persons with disabilities. Canada’s failures to mitigate the impact of climate change and provide adequate government support are also leading to violations in Indigenous communities across the country while compounding risks for people with disabilities and older people. Canada also grapples with serious human rights issues abroad relating to the lack of accountability for abuses by Canadian mining companies and meaningful action to repatriate Canadian nationals unlawfully detained in northeast Syria for suspected Islamic State (ISIS) ties.

Wide-ranging abuses against Indigenous peoples persist across Canada with significant challenges remaining to undo decades of structural and systemic discrimination.

Inadequate access to clean, safe drinking water continues to pose a major public health concern in many Indigenous communities—and continues to impede efforts to advance Indigenous rights in Canada, one of the world’s most water-rich countries.

From May to July, hundreds of unmarked graves were found at former government-funded and church-run residential schools in the provinces of British Columbia and Saskatchewan. Approximately 150,000 Indigenous children were removed from their families and communities and placed in residential schools, where they were forbidden to speak their own languages or practice their culture. Many also suffered physical and sexual abuse at residential schools, which operated until the 1990s.

Prime Minister Trudeau called on the Roman Catholic Church, which ran residential schools across Canada, to make a formal apology and publish their records. Indigenous groups and the former chair of the Truth and Reconciliation Commission called for an independent investigation and resources from the federal government to continue forensic investigations of burial sites at former residential schools.

In June, the Canadian government passed Bill C-15, establishing a framework for implementing the United Nations Declaration on the Rights of Indigenous Peoples (UNDRIP) into federal legislation. The legislation requires that all levels of government affirm Indigenous rights as protected by international human rights standards.

New data released by Statistics Canada in May found that more than six out of ten Indigenous women reported experiencing physical or sexual assault at some point in their lifetime. The report further found that 83 percent of Indigenous women who identify as lesbian, bisexual, or transgender had experienced intimate partner abuse.

Following the onset of the Covid-19 pandemic, the government released immigration detainees at unprecedented rates due to public health concerns. However, a joint Human Rights Watch and Amnesty International report released in June found that Canada continues to detain people on immigration grounds in often abusive conditions. People in immigration detention, including persons with disabilities as well as those fleeing persecution and seeking protection in Canada, are regularly handcuffed, shackled, and held with little to no contact with the outside world. With no set release date, they can be held for months or years. Many are held in provincial jails with the regular jail population and are also sometimes subjected to solitary confinement.

The Canada Border Services Agency (CBSA) remains the only major law enforcement agency in Canada without independent civilian oversight. CBSA’s unchecked exercise of its broad mandate and enforcement powers has repeatedly resulted in serious human rights violations in the context of immigration detention.

Canada is home to half of the world’s mining companies, with operations in nearly 100 countries around the world. Despite its extensive reach, the government has consistently failed to implement promised reforms to hold Canadian mining companies accountable for abuses committed abroad. The Canadian Ombudsperson for Responsible Enterprise (CORE) established in 2018 still lacks the authority to independently investigate or publicly report on human rights abuses involving Canadian extractive companies and has limited capacity to hold responsible parties accountable.

In June, the House of Commons Subcommittee on International Human Rights tabled a report calling on the government to introduce legislation requiring Canadian companies to conduct human rights due diligence to “identify, prevent, mitigate and account for any potential adverse human rights, environmental and gendered impacts” caused by their supply chains and operations. The committee also asked the government to consider strengthening the powers of the CORE by granting it the authority to compel witnesses and documents.

In February, a Canadian member of parliament filed a petition in the House of Commons calling on the government to investigate the role of Canadian mining companies in the extrajudicial killings of environmental and human rights defenders in the Philippines.

In March, a Canadian law professor filed a lawsuit against the federal government alleging that it improperly withheld information about its diplomatic interventions on behalf of a Canadian mining company accused of human rights violations at its mine in Guatemala.

In May, over 80 civil society organizations released a letter calling on Canadian mining company Barrick Gold, as well as the government of the Dominican Republic, to reconsider the planned expansion of the Pueblo Viejo gold mine due to concerns about environmental and human rights impacts.

Nearly four dozen Canadian men, women, and children remain unlawfully and indefinitely detained in northeast Syria in locked desert camps and prisons for Islamic State (ISIS) suspects and their families. The government of Prime Minister Trudeau continues to fail to take adequate steps to assist and repatriate these nationals, who have spent over two years in filthy, deeply degrading, life-threatening and often inhuman conditions. None of the Canadians has been charged with any crime or brought before a judge to review the legality and necessity of their detention.

In March, Canada with the assistance of a former US diplomat repatriated a 4-year-old Canadian child from one of these camps, but refused to bring her Canadian mother home. The mother was able to leave northeast Syria, but remained stuck in the Kurdistan Region of Iraq for over four months awaiting travel documents that Canada needed to provide her in order to come home. Following a court application filed on her behalf in October against the federal government, she was issued a passport and was able to return to Canada in late November.  At time of writing, Covid-19 was rapidly spreading across northeast Syria with nearly 30,000 cases reported in the region in September  alone. The World Health Organization has warned of “significant risk” of high transmission in the camps.

In June, the Standing Committee on Foreign Affairs and International Development released a report following a parliamentary hearing on the impact of Covid-19 on children in crisis settings and called on the government to “pursue all options possible” to repatriate  Canadian children detained in northeast Syria. The committee urged the government to “make every effort” to provide consular assistance to all detained Canadians. Opposition MPs on the committee tabled a supplementary report, recommending that the government act immediately to facilitate the swift repatriation of Canadian children and provide consular services to the detainees.

In September, 26 detainees in northeast Syria and their families in Canada filed an application in federal court against the government for failing to repatriate or help secure the release of these citizens. In September, Kimberly Polman, one of the Canadian detainees, began a hunger strike to protest her lack of medical care.

Canada is also the top per capita public financer of fossil fuels in the world and projects increased oil production through 2050. According to the Climate Action Tracker, Canada’s commitment to reduce emissions by 40-45 percent below 2005 levels by 2030 is not sufficient to meet the Paris Agreement goal to limit global warming to 1.5°C above pre-industrial levels. And Canada is not on track to meet its target.

World governments’ failure to tackle climate change is already taking a growing toll on marginalized populations in Canada. Warming temperatures and increasingly unpredictable weather are reducing the availability of First Nations’ traditional food sources, and increasing the difficulty and danger associated with harvesting food from the land.

Federal and provincial climate change policies have failed to put in place adequate measures to support First Nations in adapting to current and anticipated impacts of climate change and have largely ignored the impacts of climate change on First Nations’ right to food. While the federal government made historic funding commitments in 2021 to support Indigenous food security and Indigenous-led climate monitoring, much more is needed to address the impact of the climate crisis on First Nations and to ensure that appropriate food subsidies and health resources are available to all who need them.

Inadequate government support also compounded risks for people with disabilities and older people during the June 2021 “heat dome,” an extreme and foreseeable heatwave that killed hundreds of people in the Canadian province of British Columbia. Lack of proper heat planning and lack of access to cooling and targeted support for at-risk populations contributed to unnecessary suffering and possibly deaths.

UN Secretary-General António Guterres has repeatedly called for countries to repatriate their nationals held as ISIS suspects and family members from northeast Syria and in March called it “absolutely essential” that Canada do so. In February, the UN special rapporteur for the protection and promotion of human rights while countering terrorism had placed Canada on a 57-country “list of shame” for its failure to repatriate Canadian nationals from northeast Syria. The US has also repeatedly called on all countries to repatriate their nationals.

Prime Minister Trudeau has acknowledged the need for negotiations at the World Trade Organization to "resolve" intellectual property issues constraining supply of Covid-19 health products globally, but Canada has not supported the proposal of India and South Africa for a waiver of certain provisions of the TRIPS agreement, only going as far as supporting text-based negotiations for a consensus-based outcome.

In January, Canada issued a business advisory to Canadian companies outlining the legal and reputational risks of working in Xinjiang, China, where their supply chains may be tainted by forced labor. At the June session of the United Nations Human Rights Council, Canada delivered a joint statement on behalf of 44 countries, expressing concerns at abuses in Xinjiang, as well as the deteriorating rights situations in Hong Kong and Tibet.

At the February session of the United Nations Human Rights Council, Canada as a member of a core group on Sri Lanka supported the adoption of a resolution establishing a new accountability mechanism to collect, analyze, and preserve evidence of international crimes for use in future prosecutions.

In March, Canada joined more than 30 countries in supporting a joint declaration condemning human rights abuses in Egypt, including the crackdown on civil society and political opposition, and called for “accountability and immediate end of impunity.”