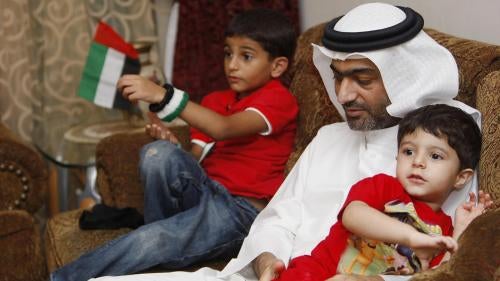 Despite declaring 2019 the “Year of Tolerance,” United Arab Emirates rulers showed no tolerance for any manner of peaceful dissent. Ahmed Mansoor, an award-winning human rights activist sentenced to 10-years in prison solely for exercising his right to free expression, went on hunger strike to protest his prison conditions and unjust conviction. Activists who had completed their sentences as long as three years ago continued to be detained without a clear legal basis.

The UAE announced in June the withdrawal of most of its ground troops from the Saudi-led military operations in Yemen, but UAE-backed Yemeni troops continued to commit abuses there.

In March 2019, Ahmed Mansoor, a leading Emirati human rights defender, began a month-long hunger strike to protest his unjust conviction and awful prison conditions.  The UAE in 2017 detained Mansoor on speech-related charges that included using social media to “publish false information that harms national unity.” Authorities held him in an unknown location for more than a year with no access to a lawyer before sentencing him in May 2018 to 10 years in prison. On December 31, 2018, the UAE’s Federal Supreme Court upheld Mansoor’s sentence.

In July 2019, British academic Matthew Hedges lodged a complaint against Emirati authorities with the United Nations Working Group on Arbitrary Detention and the UN high commissioner for human rights. After his May 2018 arrest, authorities detained him in solitary confinement where Hedges alleged he was mistreated. On November 21, 2018, the Abu Dhabi Federal Court of Appeal sentenced him to life in prison on spying charges. The UAE pardoned him five days later, following an international outcry.

As of November 2019, UAE authorities continued to hold two Emiratis, Khalifa al-Rabea and Ahmed al Mulla, who completed their sentences on state security charges between one and three years ago. They had been convicted on the basis of their ties to al-Islah,  a legally registered Islamist political movement that the UAE banned in 2014 as “terrorist.” Authorities arbitrarily kept them behind bars for “counselling,” according to Emirati activists. On August 5, 2019, the UAE president pardoned three other activists also held beyond the completion of their sentences, saying they had “returned to the correct path.” Emirati news organizations shared a video of Osama al-Najjar, Badr al-Buhairi, and Othman al-Shehhi publicly denouncing al-Islah.

Especially in cases related to state security, individuals were at serious risk of arbitrary and incommunicado detention, torture, and ill-treatment, prolonged solitary confinement, and denial of access to legal assistance. Forced confessions were used as evidence in trial proceedings, and prisoners complained of dismal conditions and inadequate medical care.

In 2017, a UAE court convicted Alia Abdel Nour of terrorism in a 2017 case marred by allegations of torture and serious due process violations. Suffering from cancer, she was denied regular family visits, and after her transfer to a hospital in November 2016, authorities shackled her hands and feet to her hospital bed for extended periods. Despite her failing health, authorities ignored repeated calls by international rights groups, European parliamentarians, United Nations experts, and family members to release her on humanitarian grounds. Abdel Nour died in detention on May 4, 2019.

On February 13, 2019, eight Lebanese nationals detained for more than a year without charge first appeared in court in a terrorism trial on charges of links to Hezbollah in Lebanon. Their trial was marred with allegations of ill-treatment and forced confessions. Family members said they were held in prolonged solitary confinement and denied access to their families and legal counsel, and were unable to review the evidence against them. On May 15, 2019, a UAE court sentenced one to life in prison, two to 10-year sentences, and acquitted five.

In 2019, despite announcing the withdrawal of most of its ground troops in June, the UAE remained part of the Saudi-led military operations in Yemen and restated its intention to maintain a presence in Aden and southern governorates, and its support for certain Yemeni forces.

A United Nations report released on September 3, 2019 by the Group of Eminent Experts on Yemen, appointed by the UN High Commissioner for Human Rights, said UAE-backed forces and armed groups committed grave abuses including enforced disappearances, arbitrary arrests and detention, and torture and other ill-treatment, including rape and other forms of sexual violence. The report also stated that during 2018 and continuing into 2019, UAE and UAE-backed forces have used threats and intimidation to prevent journalists in Aden who were critical of UAE of accessing areas under their control.

The UAE’s labor law excluded from its protections domestic workers, who faced a range of abuses, including unpaid wages, house confinement, workdays up to 21 hours, and physical and sexual assault by employers. Domestic workers faced legal and practical obstacles to redress. While a 2017 law on domestic workers does guarantee some labor rights, it is weaker than the labor law and falls short of international standards.

Some provisions of Federal Law No. 28 of 2005 regulating personal status matters discriminate against women. For a woman to marry, her male guardian must conclude her marriage contract; men can unilaterally divorce their wives, whereas a woman must apply for a court order to obtain a divorce; and a woman can lose her right to maintenance if, for example, she refuses to have sexual relations with her husband without a lawful excuse;. In 2019, the authorities introduced amendments to the personal status law that revoked a provision that had obliged women to “obey” their husbands.

Following amendments in 2016, the UAE’s penal code no longer explicitly permits domestic violence. On December 31, the authorities passed a law on protections from domestic violence, which are to come into effect in 2020.

Article 356 of the federal penal code criminalizes (but does not define) “indecent assault” and provides for a minimum sentence of one year in prison. UAE courts use this article to convict and sentence people for same-sex relations as well as consensual heterosexual relations outside marriage. Women are disproportionately impacted as pregnancy serves as evidence of extramarital sex and women who report rape can find themselves prosecuted for consensual sex instead. The UAE’s penal code punishes “any male disguised in a female apparel and enters in this disguise a place reserved for women or where entry is forbidden, at that time, for other than women” with one year’s imprisonment, a fine of up to 10,000 dirhams (US$2,723), or both. In practice, transgender women have been arrested under this law even in mixed-gender spaces.

Different emirates in the UAE have laws that criminalize same-sex sexual relations. In Abu Dhabi, “unnatural sex with another person” can be punished with up to 14 years in prison. Article 177 of Dubai’s penal code punishes consensual sodomy by imprisonment of up to 10 years.

In January, Denmark announced it would no longer export arms to the UAE. In February, investigations by CNN and Amnesty International found that the UAE was supplying various militias in Yemen with US and European manufactured weapons. In July 2019, a congressional effort in the United States to block the sale of billions of dollars’ worth of weapons to the UAE and Saudi Arabia failed after President Donald Trump vetoed the resolutions. Between January and June, the German government approved $26.1 million worth of defense exports to the UAE.

In 2019, the UAE authorities invested in a “soft power” strategy aimed at painting the country as a progressive, tolerant, and rights-respecting nation. In February, in response to an invitation by Sheikh Mohammed bin Zayed Al Nahyan, crown prince of Abu Dhabi, Pope Francis visited the UAE, delivered a public mass, met privately with the crown prince, and attended an interfaith summit. The Pope did not publicly address UAE abuses, and there is no indication that he raised human rights concerns privately.

This chapter has been updated to reflect changes made to the Personal Status Law in 2019 regarding women's requirement to obey their husbands and to reflect developments regarding legal protections from domestic violence.