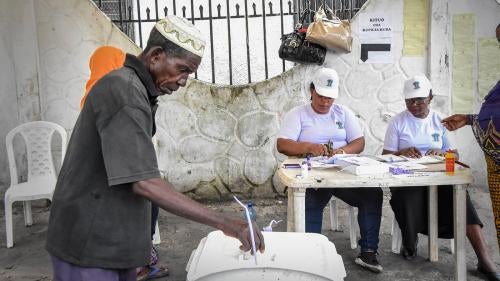 Tanzania’s human rights record continued to deteriorate under President John Magufuli, who was elected into office in 2015. The government lifted some restrictions on the publication of independent statistics, but continued to restrict media and critics of the government, deregister civil society groups, arrest journalists, restrict civic space, and undermine the rights of women and of children.

Freedom of Expression and Media Freedoms

The Tanzanian government cracked down on media and civil society groups and individuals critical of the government. In February, the Ministry of Information, Culture, Arts and Sports suspended The Citizen newspaper for seven days for violating the Media Services Act, accusing the newspaper of publishing two biased articles. One was about United States lawmaker Bob Menendez raising concerns about “the gradual downward spiral of respect for civil liberties in Tanzania,” and another reported that the Tanzania shilling was falling against the US dollar.

On April 25, authorities at the Julius Nyerere International Airport in Dar es Salaam detained and eventually deported Wairagala Wakabi, director of the Ugandan-based Collaboration on International ICT Policy in East and Southern Africa (CIPESA), as he was on his way to receive a human rights award.

On July 29, 2019, six plainclothes policemen arrested high-profile investigative journalist Erick Kabendera at his home in Dar es Salaam. He was later charged with non-bailable offenses related to money laundering, tax evasion, and leading organized crime. Kabendera had written for several international publications critiquing Tanzanian politics, including The East African, The Guardian and The Times of London.

On August 22, police detained Joseph Gandye, a journalist with Watetezi TV, in Dar es Salaam following a police summons. Gandye, had published an investigative piece on police brutality in Mafinga in Iringa in central Tanzania on August 9. On August 23, police released Gandye without having charged him.

At the close of 2018, Bob Chacha Wangwe appealed his 2017 conviction for publication of false information under the Cybercrimes Act for critiquing on Facebook the conduct of elections in Zanzibar in 2015. A Dar es Salaam court sentenced him to 18 months’ imprisonment or a fine of 5 million Tanzania shillings (US$2,175). In March, the High Court of Tanzania in Dar es Salaam upheld Bob Chacha Wangwe’s appeal against his conviction, citing lack of evidence.

In June, parliament amended the Statistics Act of 2015, which previously made it a crime to publish statistics not approved by the National Bureau of Statistics (NBS). The amended law removed the criminal offense of publishing independent statistical information and provided that every person has a right to collect and disseminate such information, including those different from the NBS’s.

In March, the East African Court of Justice held that the Media Services Act of 2016 violated protocols of the EAC treaty and called on the Tanzanian government to amend it to be in line with the treaty. Following this, the government expressed willingness to have a dialogue with media sector stakeholders on media laws but  had not amended the law.

The government has continued to restrict the political opposition. In January, Parliament passed amendments to the 2002 Political Parties Act, which granted broad powers to the Registrar of Political Parties to demand information from political parties, to suspend individual members of political parties, and required institutions or individuals to get approval from the Registrar to conduct civic education, or face criminal sanctions including imprisonment or fines.

Nine leaders of the main opposition party, Chama Cha Demokrasia na Maendeleo (Chadema), are currently facing charges for sedition, incitement to violence, and holding an “illegal rally” in February 2018. On March 7, the High Court ordered that Chadema politicians Freeman Mbowe and Esther Matiko, who had been jailed since November 23, 2018, for failing to appear for a court hearing, be released and have their bail reinstated.

In May, armed men abducted Mdude Nyagali, a high-profile dissident and opposition activist, as he left work in Mbozi in western Tanzania on the evening of May 5, according to a statement from Chadema party. Nyagali was found on May 9, at Inyala, about 150 kilometers away from Mbozi, seriously injured and unable to speak.

Although President Magufuli pledged in a November 17 meeting with senior World Bank officials that Tanzania would not “pursue any discriminatory actions related to harassment and/or arrest of individuals, based on their sexual orientation,” arrests on the grounds of alleged sexual orientation continued to take place.

In 2017, President Magufuli banned pregnant girls and young mothers from attending school.  Police have arrested pregnant schoolgirls and their families to force them to reveal the identity of the men or boys who had impregnated them while schools have subjected girls to forced pregnancy tests. In June, Tanzanian civil society organizations filed a complaint before the African Committee of Experts on the Rights and Welfare of the Child, seeking to have this policy annulled.  Following discussions between the government and the World Bank on a loan for secondary education, the government committed to finding ways for pregnant girls to return to school.

In August, Tanzania’s government banned teachers in the lower grades of primary school from entering classrooms with canes.

In October, Tanzania’s Court of Appeal upheld a 2016 High Court ruling directing the government to raise the legal age of marriage to 18 years for both girls and boys.  Tanzania’s Marriage Act of 1971 had set the minimum marriage age for girls at 15 with parental consent, and 18 for boys, and permitted the marriage of 14-year-old children when a court is satisfied that there is the existence of special, but unspecified, circumstances.

In September 2018, President Magufuli denounced family planning, asking women to give up using contraception. Two weeks later, the government suspended radio, and television spots encouraging family planning. In March, the Ministry of Health, Community Development, Gender, Elderly and Children wrote to all heads of 18 institutions responsible for family planning in Tanzania, directing them to resume radio and television advertisements.

In response to ritual killings and amputations of people with albinism, especially children, the Tanzanian government established “temporary holding shelters,” or boarding schools for children with albinism. While the shelters may have contributed to a decline in the number of physical attacks, they have  serious negative impacts on children with albinism. They isolate them from their families and communities and exclude them from inclusive education in mainstream schools.

Between September 2017 and October 31, 2019, 78,380 Burundian refugees returned home from Tanzania under a voluntary repatriation agreement involving Tanzania, Burundi, and the United Nations High Commissioner for Refugees (UNHCR). In March 2018, Tanzania and Burundi set a goal of voluntarily repatriating 2,000 Burundians a week under the agreement.

In August 2019, Tanzanian and Burundian authorities announced a plan to send all 183,000 Burundian refugees living in three camps in Kigoma, northwestern Tanzania, back to Burundi by the end of 2019. Between August and October, Tanzanian officials also made threatening public statements, closed down a refugee camp market, and repeatedly changed administrative requirements for aid organizations operating in the camps.

On October 15, Tanzanian authorities unlawfully coerced more than 200 unregistered asylum seekers into returning to Burundi by threatening to withhold their legal status in Tanzania.

The East African Court of Justice remains an instrumental institution on human rights in Tanzania, making key legal decisions on the treatment of individuals as well as the running of institutions.

In November 2018, the World Bank withheld $300 million (£232 million) of a $500 million loan to Tanzania, citing the ban on pregnant schoolgirls. In September, the World Bank approved a $450 million loan for food consumption and livelihoods, education, and health care in Tanzania, acknowledging the amendment of the Statistics Act and the government’s commitment to facilitate all girls to complete their education.

In August, the US Embassy in Dar es Salaam and the British High Commission expressed concern about due process and lengthy pretrial detention following the arrest of journalist Erick Kabendera.