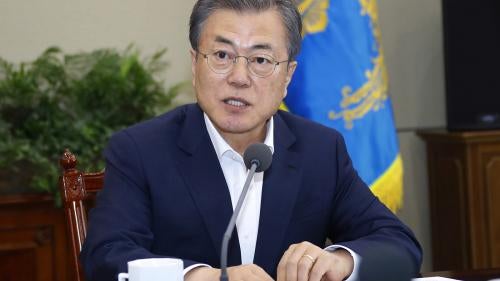 The Republic of Korea (South Korea) is a democracy that has appropriate protections in place for most political, civil, and socio-economic rights. However, discrimination can be severe against at-risk groups, including women, lesbian, gay, bisexual, and transgender (LGBT) persons, and racial and ethnic minorities like refugees and migrants, and companies lack legal obligations to respect human rights. The government also maintains unreasonable restrictions on freedom of expression, association, and assembly.

A relatively small proportion of women occupy decision-making positions in the business, political, and public sectors, and there is a 35 percent wage gap between men and women. The Economist magazine’s “Glass Ceiling Index,” which evaluates women’s higher education, women in managerial positions, and number of female members in parliament, gives South Korea the lowest rank among countries that belong to the Organization for Economic Co-operation and Development (OECD).

In positive developments, however, on April 11, South Korea’s Constitutional Court overturned the country’s strict abortion laws, which criminalized the procedure in most cases, and ordered the National Assembly to rewrite laws governing the procedure by the end of 2020.

The #MeToo movement also continued to gain ground in 2019, reaching political elites and entertainment stars. On January 23, Ahn Tae-gun, a former senior prosecutor, was sentenced for two years for sexually harassing Seo Ji-hyun, a junior colleague who publicly accused him in 2018 and helped fuel the nascent #MeToo movement in the country. On February 1, the Seoul High Court sentenced Ahn Hee-jung, a prominent politician in South Chungcheong province who had been considered a possible presidential candidate, to three-and-a-half years in prison for raping his former secretary, Kim Ji-eun.

The government is struggling with a growing problem with digital sex crimes—non-consensual online sharing of intimate images, including secretly filming using hidden cameras (known as molka). On March 18, Jung Joon-young, a K-pop star, was arrested after admitting to secretly filming himself having sex with at least 10 women and sharing the videos with friends on a group chat. On March 23, two men were arrested for streaming the “intimate private activities” of at least 1,600 motel guests across the country from hidden cameras in 30 motels in 10 cities. Government data released in 2019 showed that victims reported about 6,800 molka cases to police in 2018 but only a third were referred for trial, and fewer than one in ten trials led to prison sentences.

The growing LGBT movement in South Korean continues to trigger increased resistance by conservative Christian anti-LGBT groups. In June, Seoul’s 20th Pride Parade saw record participation with around 70,000 people, but mushrooming LGBT events outside the capital still face local resistance. In August, the 3rd Busan Queer Culture Festival was forced to cancel its rally because the local district office denied them permission for road use. In August, at the 2nd Incheon Queer Cultural Festival, police recruited around 3,000 officers to protect a few hundred people from the LGBTQ community, nongovernmental organizations, and embassies, who were surrounded by thousands of mostly Christian anti-LGBT protesters.

The Constitutional Court is currently reviewing the 1962 Military Criminal Act (Article 92-6), which punishes sexual acts between soldiers with up to two years in prison under a “disgraceful conduct” clause, regardless of consent and whether they have sex in or outside of military facilities.

South Korea is one of the few countries in Asia to be a party to the 1951 UN Refugee Convention and its 1967 Protocol. However, it continues to reject almost all non-North Korean asylum seekers entering the country (North Koreans are granted automatic citizenship and are not processed as ordinary asylum seekers).

Of the 16, 173 people who sought asylum in 2018 and who were not from North Korea, the government finished reviewing 3,879 cases, and granted only 144 refugee status.  In some cases, the government issued humanitarian visas to allow continued stay in the country, but in most instances, applicants were rejected outright.

Of over 500 Yemeni refugees who arrived at the South Korean island of Jeju in 2018, only two were granted asylum, in December 2018, while 412 others received temporary humanitarian status and 56 were ordered to leave.

President Moon Jae-in’s administration has still not clearly enunciated its policy on North Korean human rights issues in the context of its new diplomatic opening with Pyongyang.

Although South Korea has a free press and a lively civil society, successive South Korean governments and large corporations have at various times used draconian criminal defamation laws, the national security law, and restrictive interpretations of other laws, which are still in place, to create a chilling effect that limits critical scrutiny of the government and corporations.

Criminal defamation law allows for up to seven years’ imprisonment and a fine. The law focuses solely on whether what was said or written was in the public interest and does not allow for truth as a complete defense. The National Security Law criminalizes any dissemination of anything that the government classifies as North Korean “propaganda.” (The two Koreas are technically still at war, as the Korean War ended with only a ceasefire in 1953). The law imposes significant restrictions on the freedom of South Koreans to create and join political associations by imposing severe criminal penalties on anyone who joins, praises or induces others to join an “anti-government organization,” a term not clearly defined in law.

South Korea joined the International Labour Organization (ILO) in 1991 but has not ratified 4 of the ILO’s 8 core conventions. In September, the South Korean Cabinet approved a motion for parliamentary approval to ratify the ILO conventions on freedom of association (Convention 87), the right to organize and collectively bargain (Convention 98), and the prohibition of forced labor (Convention 29). It also proposed three bills reforming labor union laws, including one allowing the creation unions for public servants and teachers.

South Korean companies have an absence of legal obligations to conduct due diligence into human rights abuses in the entities they control, including those in their supply chains (subcontractors, suppliers, franchisees, etc.).

South Korea has a mutual defense treaty and close bilateral relations with the United States, yet the country’s continued economic growth remains highly dependent on close trading relationships with many other countries around the world, including Japan and China—which together account for approximately one-quarter of South Korea’s exports.

On June 30, President Moon and US President Donald Trump met with North Korean leader Kim Jong Un in an impromptu summit in which neither publicly raised human rights; and the resumption of working level nuclear talks was announced. In October, North Korea’s government said that current non-proliferation talks with the US had collapsed.

The relationship between South Korea and Japan has been important in mobilizing strong international attention to North Korea’s human rights record.  However, it worsened in 2019, mainly because South Korea’s Supreme Court, in October and November 2018, ordered two Japanese companies to compensate 14 victims of forced labor during the Second World War.  Japan believes the matter was settled under a 1965 treaty.

In August, in direct response to the case, Japan moved to restrict exports of important high-tech material to South Korea. In response, South Korea abruptly broke off its intelligence sharing arrangement with Japan, leading to criticism from the United States and complicating ongoing cooperation between the three countries, including on addressing human rights issues in North Korea.