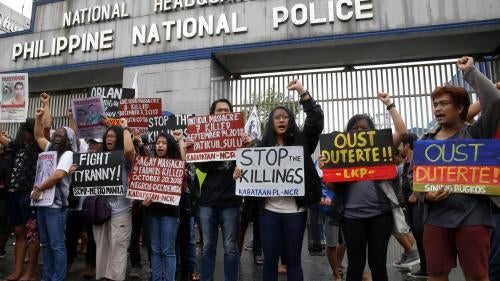 Three years after President Rodrigo Duterte took office in June 2016, his “war on drugs” has killed thousands of people largely from impoverished urban areas. Extrajudicial killings by police and their agents have continued on a regular basis, spreading from the capital region, Metro Manila, into other cities and provinces. The impact of the “drug war” includes not only loss of life but damage to the livelihoods, education, and the mental health of surviving family members.

In July 2019, the United Nations Human Rights Council adopted a resolution asking the Office of the High Commissioner for Human Rights to submit a report in June 2020 on the human rights situation in the Philippines, bringing to bear international pressure for accountability. The Duterte administration responded by ordering the suspension of all negotiations for financial assistance from the 18 countries that endorsed the resolution.

General elections in May 2019 solidified Duterte’s power base as more politicians allied themselves with his ruling party. Duterte’s former aide, Christopher Go, and his former police chief, Ronaldo dela Rosa, who initially spearheaded the “drug war,” were among those elected to the Senate. Dela Rosa was named to head the Senate committee charged with investigating police matters and the “drug war.”

The government’s “drug war” continued in 2019, with new cases appearing in the media daily. The modus operandi for the killings involved police raiding homes to apprehend alleged drug dealers or users, who instead of being taken into custody would be reported dead, with the police claiming self-defense. Human Rights Watch has documented the police planting weapons near suspects bodies to justify their lethal use of force.

The Philippine National Police reported that 5,526 suspects were killed  in police operations from July 1, 2016 to June 30, 2019. However, this number does not include the thousands more whom unidentified gunmen killed in cases that the police do not seriously investigate, pushing the death toll to as high as 27,000 according to estimates by domestic human rights groups. Research by Human Rights Watch and credible media outlets such as Rappler and Reuters indicate that these vigilante-style killings were perpetrated by police officers themselves or by killers linked to the authorities.

Previously concentrated in Metro Manila, an increasing number of the killings are now being carried out in other urban areas, notably Cebu City in the central Philippines and Bulacan province just north of Manila. Human Rights Watch also found “drug war” killings in many other cities and towns in 2019.

Of these thousands of cases, only one case has resulted in the conviction of police officers. In November 2018, three police officers were sentenced to up to 40 years in prison for the murder of 17-year-old Kian delos Santos. CCTV footage showed the police officers taking the teenager into a back alley where he was later found dead. The police claimed in September 2019 that 103 police officers were facing criminal charges in court for their role in “drug war” killings, fewer than half of those implicated.

President Duterte continued to endorse the anti-drug campaign, warning in a September 25 speech that, “if you go into drugs... I will kill you.” He added: “Even with the United Nations listening, I will kill you, period.”

The extrajudicial killing by security forces and their agents of political activists, environmentalists, and human rights defenders continued, most notably on the central Philippine island of Negros. According to a Rappler tally, there were 116 killings on Negros from July 1, 2016 to August 27, 2019. While some cases may be drug-related, most victims were activist farmers and farmer group leaders, reflecting the violent land conflict that has wracked the island for decades. The killings on Negros spiked in July, when 14 land activists were fatally shot in a single week.

Similar killings occurred in other parts of the country. On July 2, unidentified gunmen shot labor organizer and political activist Dennis Sequeña at a workers’ meeting in Cavite. On July 7, a church activist, a provincial politician, and a businessman were killed in separate attacks by unidentified gunmen on motorcycles. The previous month, four—Neptali Morada, Nonoy Palma, Ryan Hubilla, and Nelly Bagasala—were killed in different attacks in less than 48 hours. In September, Global Witness reported that the murder of environmentalists had increased under the Duterte administration, and that the Philippines in 2018 became the most dangerous country in the world for land and environmental activists.

Human Rights Watch and other rights groups have linked many of these killings to members of the military, police, or security force-backed militias. Few of the killings of activists over the years have been seriously investigated, and few have resulted in convictions.

The Duterte administration has not relented in its campaign against members of civil society. On July 18, for example, police filed sedition complaints against Vice President Leni Robredo and 35 other people, including priests and bishops, political opposition members, and human rights lawyers and activists whom it claimed had participated in a plot to oust Duterte. The respondents all denied the charge.

Also in July, Duterte’s national security adviser, Hermogenes Esperon, filed perjury charges against religious and activist groups for allegedly lying in their petition seeking judicial protection from state security forces. The petitioners alleged that they were being targeted by the military. They also asserted that Esperon’s complaint constituted retaliation to silence them. Senator Leila de Lima, a main critic of Duterte who initiated an investigation into the “drug war" killings in 2016, has been held in police detention since February 2017, facing fabricated drug charges.

Meanwhile, the government has continued its campaign of “red tagging” activists by accusing them of being members or sympathizers of the communist New People’s Army. Over the years, such allegations have often been followed by lethal attacks.

Political attacks against journalists intensified in 2019, beginning with the arrest on two occasions of Maria Ressa, executive editor of Rappler, a news website, which has published extensively on the “drug war.” Ressa faced baseless cases of tax evasion and libel, while Rappler received official scrutiny for alleged funding by foreigners.

One journalist had been killed as of November: news anchor Eduardo Dizon of Kidapawan City in Mindanao, who was shot dead on July 10. At least one other,  Brandon Lee, suffered serious injuries from an attack by a gunman in August in the northern Philippines.

Other members of the press were subjected to red-baiting and threats, notably Cong Corrales, associate editor of the Mindanao Gold Star Daily, and Froilan Gallardo, a senior correspondent for MindaNews. The country’s intelligence service in September “red-tagged” journalist Sonia Soto, manager of a radio station in Pampanga province, accusing her being having links to communist groups.

The government’s brutal “drug war” has devastated the lives of countless children and their families. Human Rights Watch research in the past year shows that the killing of breadwinners has resulted in psycho-social trauma and economic hardships for affected families, with many children having to stop going to school and begin working. Some of these children are bullied in schools and in their communities; many are driven to extreme poverty that forces them live in the streets. The government has done little to address these consequences of its “drug war.”

Apart from being direct victims of the “drug war” itself – several children have been killed by stray bullets during anti-drug raids.  An initiative started in February in Congress to lower the age of criminal responsibility from the current 15 to 12, with some even proposing it be lowered to 9, could result in more and younger children being locked up in ill-maintained detention facilities.

In a positive move, Congress in February approved a new law protecting children during armed conflict. It appears to be the world’s first law explicitly criminalizing the military occupation of schools. However, at time of writing the Duterte administration had not yet endorsed the Safe Schools Declaration, an international commitment to protect education during conflict.

The Philippine Congress failed in 2019 to pass pending legislation prohibiting discrimination based on sexual orientation and gender identity in employment, education, health care, housing, and other domains. It also has not passed legislation recognizing same-sex partnerships and extending benefits to same-sex couples.

Allies of President Duterte in both houses of Congress pushed for the reimposition of the death penalty, especially for drug crimes. In September, Congress conducted hearings on numerous bills that seek to amend existing laws to include capital punishment. In the Senate, where previous death penalty bills have foundered, Senator Manny Pacquiao led the campaign to resuscitate the measure, with the help of newly elected senators who ran under Duterte’s party banner.

The United States remains the key economic and security ally of the Philippines, although there have been growing concerns in Washington about the Duterte administration’s increasingly cozy relationship with China.

On July 11, 2019, the UN Human Rights Council adopted a resolution sponsored by Iceland, despite efforts by the Philippines to block the resolution, including through an extensive misinformation campaign and wide-reaching diplomatic pressure. The resolution requested the Office of the High Commissioner for Human Rights (OHCHR) to present a report on the human rights situation in the Philippines. The passage of this ground-breaking resolution marked the first time the Philippines was the subject of such a measure from the Human Rights Council. In September, the OHCHR began soliciting inputs from member states, civil society, and the UN system for the report, due in June 2020.

In retaliation, the Duterte government in late August issued a memorandum ordering agencies of the Philippine government not to accept financial assistance from the 18 countries that voted in favor of the resolution. The memorandum “suspended all new talks and deals for foreign loans and grants” from the countries, due to “the administration’s strong rejection of the resolution of the UN Human Rights Council.”

The prosecutor of the International Criminal Court continued to conduct a preliminary examination of alleged crimes in the Philippines since July 1, 2016— despite the Philippines’ withdrawal from the Rome Statute, which took effect in March. The Office of the Prosecutor confirmed its jurisdiction over crimes committed while the Philippines was still an ICC member.