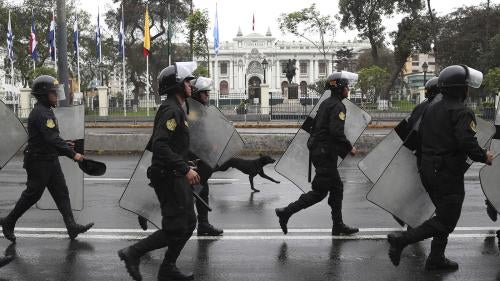 Judicial investigations into grave human rights abuses committed during the 20-year armed conflict that ended in 2000 remain slow and limited. Violence against women, abuses by security forces, and threats to freedom of expression are also major concerns.

Former President Alberto Fujimori returned to prison in January 2019, after a Supreme Court judge annulled a “humanitarian pardon” that had allowed for his release in December 2017. Fujimori was sentenced in 2009 to 25 years in prison for killings, enforced disappearances, and kidnappings.

Since 2018, Peru has been rocked by a series of corruption scandals involving all living former presidents since 2001, as well as members of the judiciary and the National Magistrate Council.

In response to the crisis, President Martín Vizcarra has, since July 2018, sought a series of political, justice, and anti-corruption reforms. A referendum in December 2018 approved a single-term limit for congressmen, new financing rules for political parties, and changes to the Magistrate’s Council. Other reforms, including gender parity for congressional elections, have also been approved.

Efforts to prosecute grave human rights abuses committed during the armed conflict have had mixed results.

Peru’s Truth and Reconciliation Commission estimated that almost 70,000 people died or were subject to enforced disappearance during the country’s armed conflict between 1980 and 2000. Many were victims of atrocities by the Shining Path and other insurgent groups; some were victims of human rights violations by state agents.

In December 2017, then-President Pedro Pablo Kuczynski granted former President Fujimori a “humanitarian pardon,” based on claims of illness, but in October 2018, a Supreme Court judge overturned the pardon. Fujimori returned to prison in January 2019. In February, the Special Criminal Chamber of the Supreme Court upheld the decision.

Also at time of writing, Former President Ollanta Humala continued to face criminal investigations for his alleged role in atrocities and cover-up of egregious human rights violations committed at the Madre Mía military base, in the Alto Huallaga region, during Peru’s armed conflict.

Courts have made very little progress in addressing abuses, including extrajudicial killings, enforced disappearances, and torture, committed during the earlier administrations of Fernando Belaúnde (1980-1985) and Alan García (1985-1990). In October 2018, the National Criminal Chamber declared Gen. Daniel Urresti not guilty of the 1988 murder of journalist Hugo Bustíos. But in April 2019, the Supreme Court annulled the decision and ordered a new trial, arguing that the chamber failed to evaluate properly the evidence. In August 2019, 13 soldiers were indicted in connection with rapes of nine women committed between 1984 and 1995 in the districts of Manta and Vilca.

In 2018, President Vizcarra passed a decree establishing a genetic profile bank to help in the search for the disappeared.

Security forces have used excessive force when responding to occasional violent protests over mining and other large-scale development projects, according to the Ombudsman’s Office and local rights groups. According to the Ombudsman’s Office, 57 civilians have died in the context of protests since 2013. Such killings have significantly declined since 2016.

In 2015, then-President Humala issued Decree 1186 that limited the use of force by police. However, Law 30151, passed in 2014, grants legal immunity to police who kill in “fulfilment of their duty.” The law may make it impossible to hold accountable police officers who use lethal force unlawfully.

In July 2019, a Congressional commission passed a “Police Protection” bill that could seriously aggravate the risk of police abuse. The bill, pending at time of writing, would abrogate the requirement included in Decree 1186 that policemen should use force in ways proportionate to risks to life and physical integrity. It would also bar judges from sending police officers to pretrial detention.

Threats to freedom of expression continue to be a concern in Peru, with some journalists facing criminal prosecution for their work.

In late 2018, the archbishop of the northern region of Piura sued journalists Paola Ugaz and Pedro Salinas for defamation after they published a series of stories on sexual abuse by members of the Sodalitium Christianae Vitae, a Catholic society. In April 2019, Salinas received a one-year suspended prison sentence, 120 days of community service, and a fine of approximately US$24,000 dollars. By August 2019, the archbishop withdrew his complaints against Salinas and Ugaz, the cases were closed, and Salinas’s conviction was revoked. But by then, a former manager of a real estate company mentioned in the stories had filed a new suit against Ugaz in connection with the same publications.

Gender-based violence is a significant problem in Peru. The Ministry of Women reported that 149 women were victims of “femicides” (defined in Peru as the killing of a woman in certain contexts, including domestic violence) in 2018, and 99 were victims from January through July 2019. In July 2019, a court in Lima sentenced Adriano Pozo to 11 years in prison for the attempted femicide of activist Arlette Contreras, but declared him not guilty of attempted rape. The case had prompted massive rallies, in 2015, against gender-based violence.

Women and girls in Peru have a right to access abortions only in cases of risk to their health or life. In July 2019, a Lima court dismissed a lawsuit filed in 2014 by an NGO seeking to abrogate a protocol that establishes what constitutes risk to health or life and have such decisions rest instead with individual doctors.

In 2019, a judge in Lima overturned a 2009 Constitutional Court ruling that had banned the free distribution of emergency contraception pills in the country.

Same-sex couples in Peru are not allowed to marry or engage in civil unions. In August, a judge ordered the civil registry to recognize the marriage of a same-sex Peruvian couple who had wed in the United States. An appeal was pending at time of writing.

In November 2018 and January 2019, lawmakers introduced bills aimed at eliminating so-called “gender ideology” from public policy. The bills would exclude use of the concept of gender (which proponents of the bill consider ideologized) from domestic legislation, including sexual education in school.

Human rights defenders, and environmental activists, as well as other community leaders, have been killed, and threatened in recent years in Peru.

In January 2019, Wilbelder Vegas Torres, an indigenous leader and environmental defender, was assassinated in a district in the northern region of Piura. Villagers told reporters that Vegas had received threats linked to his opposition to illegal mining operations in the San Sebastián de Suyo communal lands.

In April, authorities found the burned body of British environmental activist Paul McAuley in Belén, a district in the Amazonian region of Loreto.

Also in April, the Ministry of Justice approved a protocol establishing measures to protect at-risk human rights defenders and their relatives.

More than 280,000 Venezuelans are seeking asylum in Peru, the largest number of registered Venezuelan asylum seekers in any country.

More than 800,000 Venezuelans live in Peru. In January 2018, President Kuczynski authorized a year-long temporary residency permit for those who arrived before December 31, 2018, and who requested it before June 30, 2019. But in August 2018, the government restricted the permit to those who arrived before October 31, 2018, and requested it by December 31, 2018. Those who hold the permit—more than 486,000 at time of writing—are allowed to work, enroll their children in school, and access health care.

In October 2018, a judge annulled a passport requirement for entry, instated that August. The requirement would have effectively closed the door to many Venezuelan exiles, as obtaining a passport in Venezuela is extremely difficult. In June 2019, however, the government passed a resolution requiring all Venezuelan migrants to apply for a humanitarian visa at a Peruvian consulate before entering. A lawsuit filed against the resolution by a coalition of nongovernmental organizations was pending at time of writing.

In July, the Inter-American Commission on Human Rights (IACHR) and the Organization of American States’ special rapporteur on economic, social, cultural and environmental rights expressed concern over repeated instances of oil spills in the Peruvian Amazon, which, they said, harmed the rights of indigenous populations.

In 2017, Peru hosted a meeting at which foreign affairs ministers of 12 nations signed the Lima Declaration—a statement that condemns the rupture of democratic order and the systematic violation of human rights in Venezuela. This coalition of governments—called the “Lima Group” since then—has led efforts to address the human rights crisis in Venezuela.

In September 2018, Peru and five other countries referred the situation in Venezuela to the International Criminal Court prosecutor. In January 2019, Peru recognized Juan Guaidó, president of the National Assembly, as interim president of Venezuela.

As a member of the UN Human Rights Council, Peru has supported resolutions to spotlight human rights abuses, including in the Philippines, Syria, Myanmar, Iran, and Venezuela.