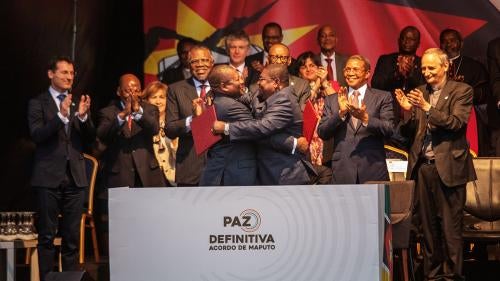 In August, Mozambique President Filipe Nyusi and the leader of the country’s main opposition party Renamo, Ossufo Momade, signed a new peace agreement pledging to end years of violence and pave the way for elections in October. A month later, the country received Pope Francis, whose presence was aimed at strengthening the peace agreement. Despite the deal, the election campaign was marred by political violence targeting mainly opposition supporters.

During 2019, the spate of attacks by a suspected Islamist armed group increased in the northern province of Cabo Delgado. Soldiers deployed to the region to fight the armed groups were implicated in acts of intimidation, arbitrarily arrests, and ill-treatment of detainees. Journalists and activists continued to face intimidation and harassment, and there has been lack of accountability for past crimes.

The country’s sixth general election was marred by violence and politically motivated attacks. In October, an election observer, Anastancio Matavele was shot dead in broad daylight allegedly by five members of the police elite force. The incident happened a week before election day, in Gaza province, where Human Rights Watch had documented serious abuses and incidents of violence since the start of the election campaign on August 31, including violations of the right to peaceful assembly and arbitrary arrests of opposition candidates.

In its assessment of the election, the Electoral Commission expressed  concern over “growing cases of destruction of propaganda material, violation of freedom of assembly and physical attacks,” and that in two weeks of campaigning,  14 people died and 29 people were detained.

Also, vehicles moving around in Manica  and Sofala provinces, near Gorongosa, were attacked on different occasions by armed men believed to be part of a dissident group of Renamo guerrillas who rejected the August peace agreement. The leader of the group claimed responsibility for two of the attacks, and threatened to continue if the election campaign was not suspended.

Violations and Attacks in the North

Attacks by a suspected Islamist armed group, locally known as both Al-Sunna wa Jama’a and Al-Shabab, continued in the northern province of Cabo Delgado, with armed groups changing their tactics. In addition to beheading people and burning houses, the group became implicated in kidnapping of women,  as well as attacks on public transport and killing of military personnel.  The extremist group Islamic State (ISIS) claimed responsibility for at least two of the attacks; however, the extent of ISIS involvement, if any, is unclear. The attacks began in October 2017 on police stations in Mocimboa da Praia district, then spread to other districts in the northern part of Cabo Delgado, notably in Macomia, Palma and Nangade. The violence also affected the electoral process, with government imposing restrictions to campaign parades in northern Cabo Delgado.

Impunity for Past Crimes

Impunity for serious abuses by state security forces and Renamo persisted, and parliament in July  approved a broad amnesty law that exempted Renamo members from prosecution for crimes committed between 2014 and 2016. During this time, both government security and defense force and Renamo armed men were involved in sporadic fighting that led to serious human rights abuses, including enforced disappearances, torture, killings, and destruction of private property, documented in Human Rights Watch’s 2018 report “The Next One to Die.”

During 2019, crackdown on rights to freedom of expression and peaceful assembly continued. In January, the police surrounded the Maputo office of the Centre for Public Integrity (CIP), an independent civil society organization, after the organization launched a campaign against the repayment of illegal loans amounting to about US$2.2 billion. Police also ordered people to remove campaign t-shirts and stop distributing them. In March, authorities disrupted a march organized by a local primary school to mark the city’s annual carnival. Days later, the mayor of Maputo rejected plans for Mozambique’s leading women’s rights group, Forum Mulher, to march against domestic violence on International Women’s Day.

State security forces intimidated, detained, and prosecuted journalists covering the fight against an Islamist armed group in the northern province of Cabo Delgado. The government barred media organizations and journalists from visiting the province, while the army and police detained journalists who managed to get there. In January, police from Macomia district arrested, without a warrant, journalists Amade Abubacar and Germano Daniel Adriano while they were interviewing villagers who had fled their homes due to intensified attacks. Abubacar was held in pretrial detention for nearly 100 days, including 12 days in incommunicado military detention. A month earlier, soldiers detained an academic, a journalist, and a driver in Mocimboa da Praia district after they interviewed residents of Chitolo village.

In March, tropical cyclone Idai hit near the coastal city of Beira, bringing heavy rains that left entire villages in Manica, Sofala, and Zambezia provinces submerged as floodwaters rose. Tens of thousands of people were displaced and, according to the United Nations, over 1.85 million people, most of them women and children, needed urgent  assistance. Victims, residents, and aid workers told Human Rights Watch that local community leaders coerced women into engaging in sex in exchange for aid.

There has been some significant progress in the rights of Mozambican women and girls. In December 2018, the Mozambican Ministry of Education revoked a 2003 decree  banning pregnant girls and adolescent mothers from attending day classes and ordered them to only attend night classes. In July, Mozambique’s national assembly took an important step toward ending the country’s high rate of child marriage by unanimously adopting a law that prohibits marriage of children younger than 18 years old, without exception.

Although the reports of attacks and abductions of people with albinism have declined since 2015, many families of children with albinism still live in fear, some keeping their children out of school. In 2019, Human Rights Watch also found that children living with albinism in Tete province  face discrimination, stigma, and rejection at school, in the community, and at times by their own families. They struggle to overcome barriers such as threats of attacks, bullying, and lack of reasonable adjustments in the classroom, which violate their right to education.

Four years since the decriminalization of homosexuality in Mozambique, and despite a November 2017 court decision that declared unconstitutional a law with vague “morality” provisions that had been used to justify denying registration to lesbian, gay, bisexual, and transgender (LGBT ) groups, the government has still not registered the country’s largest LGBT group, Lambda.

The UN Human Rights Council has appealed on several occasions to the government to register nongovernmental organizations that work on issues of sexual orientation and gender identity. Despite authorities showing some tolerance for same-sex relations and gender nonconformity, LGBT people continue to experience discrimination at work and mistreatment by family members.

Switzerland was instrumental in brokering the August 2019 Mozambique peace agreement, with Swiss diplomats playing a major role as mediators. In August, the chairperson of the African Union Commission hailed the amnesty signed that month as a vital milestone in ending the Mozambican conflict. In June, Mozambique hosted for the first time the US-Africa Business Summit. While the meeting was important for promoting investment in the country, its agenda did not include discussions about the links between business, insecurity, and human rights in the areas being considered by investors.

Pope Francis visited Mozambique in September. He met with youth from different religions, as well as political and civic leaders, encouraging them to consolidate the peace accord. In September, the European Union, which deployed 32 long-term election observers for the general elections, expressed concern over the violence and political harassment during campaign. After the elections, the EU said its observers mission identified some irregularities and malpractices on election day and during the results management process, including ballot-box stuffing, multiple voting, intentional invalidation of votes for the opposition, and altering of polling station results with fraudulent addition of extra votes.