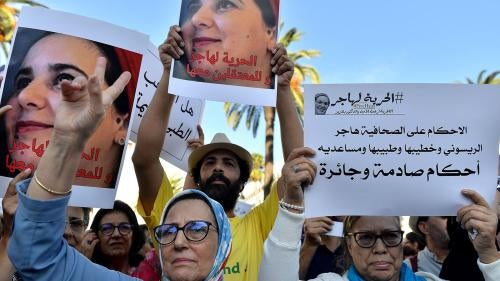 While there remained some space to criticize the government in Morocco—provided that any harsh criticism avoided the monarchy and other “red lines”—authorities continued to selectively target, prosecute, jail, and harass critics, and enforce various repressive laws, notably pertaining to individual liberties.

Freedom of Assembly, Police Violence, and the Criminal Justice System

On April 6, an appeals court in Casablanca confirmed the first-instance verdicts against Hirak protest leaders in the Rif region of Morocco, who were sentenced on June 2018 to up to 20 years in prison, largely based on statements that they said were made under police torture.

The Hirak, a protest movement in the Rif region that started in 2016, staged several largely peaceful mass protests for better socioeconomic conditions until a police crackdown in May 2017 led to the arrest of more than 450 activists, including about 50 leaders who underwent a mass trial in Casablanca that lasted more than a year.

Since the confirmation of the verdicts, the Hirak leaders have been held in various prisons in Morocco. Several staged hunger strikes in protest of what they called political trials.

The Code of Penal Procedure gives a defendant the right to contact a lawyer after 24 hours in police custody, extendable to 36 hours. But detainees do not have the right to a have a lawyer present when police interrogate or present them with their statements for signature.

On April 16, an appeals court in Casablanca confirmed the dissolution of Racines, a cultural association, four months after a court of first instance ordered it. The decision was taken after the governor of Casablanca petitioned a tribunal to act against the group for “organizing an activity including interviews interspersed with clear offenses towards institutions.” The basis for this complaint was that in August 2018 Racines offered its Casablanca office as a venue for recording a YouTube-based talk show in which guests criticized King Mohammed VI’s speeches and policies.

Authorities frequently impeded events organized by local chapters of the Moroccan Association for Human Rights (AMDH) by denying access to planned venues. On at least five occasions in 2019, including in Azrou, Tiznit, and Benslimane, authorities blocked the entrance of community centers and other meeting rooms where AMDH events were programmed.

According to AMDH, as of September 2019, authorities had refused to process the administrative formalities of 62 of its 99 local branches, impeding their ability to carry out functions like opening new bank accounts or renting space.

The Press and Publications Code, adopted by parliament in July 2016, eliminates prison sentences for speech-related offenses. Meanwhile, the penal code maintains prison as a punishment for a variety of nonviolent speech offenses, including for “causing harm” to Islam, the monarchy, and “inciting against” Morocco’s “territorial integrity,” a reference to its claim to Western Sahara.

On September 30, a court in Rabat convicted and sentenced Hajar Raissouni, a 28-year-old journalist, to one year in prison for having an abortion and sex outside marriage after police arrested her on August 31. A prosecutor publicly disclosed deeply personal details about her sexual and reproductive life, and a judge refused to provisionally release her pending trial.

The court sentenced Raissouni’s fiancé, Rifaat al-Amin, to one year in prison. The doctor accused of performing Raissouni’s abortion received a two-year prison sentence, while a medical assistant and an office assistant both received suspended sentences for taking part in the procedure. All the individuals denied the charges. Raissouni, Al-Amin, and the doctor were freed on October 16 after receiving a royal pardon. The case was possibly motivated by Raissouni being a journalist at Akhbar Al Yaoum, a daily newspaper that authorities have targeted repeatedly for its independent reporting and commentary, and her being a relative of high-profile dissidents.

On April 6, an appeals court upheld the three-year prison sentence pronounced against journalist Hamid El Mahdaoui for failing to report a security threat. The verdict was based on a phone call El Mahdaoui received in May 2017 from a man who said he intended to create armed strife in Morocco. The court did not accept the journalist’s defense that he had concluded the declarations of the caller, whom he did not know, were idle chatter that did not warrant alerting the authorities. Authorities have a long history of targeting El Mahdaoui, a government critic.

On February 11, an appeals court in Tetouan sentenced Soufian al-Nguad, 29, to one year in prison for “incitement to insurrection,” after he posted comments on Facebook encouraging people to march in protest against the death of Hayat Belkacem. In September 2018, coastguards killed the 20-year old Moroccan woman while firing on a boat that was apparently crossing the strait of Gibraltar to bring migrants clandestinely to Europe. A first-instance court sentenced al-Nguad to two years in prison. Though authorities pledged to investigate Belkacem’s killing, their findings had not been publicly disclosed at time of writing.

The United Nations-sponsored process of negotiations between Morocco and the Polisario Front on self-determination for the Western Sahara, most of which is under de facto Moroccan control, remained stalled after the resignation in May of Horst Kohler, the envoy of the UN secretary-general. Kohler had not been replaced at time of writing. Morocco proposes a measure of autonomy under its rule but rejects a referendum on independence.

Moroccan authorities systematically prevent gatherings in the Western Sahara supporting Sahrawi self-determination, obstruct the work of some local human rights nongovernmental organizations (NGOs), including by blocking their legal registration, and on occasion beat activists and journalists in their custody and on the streets.

In 2019, 23 Sahrawi men remained in prison after they were convicted in unfair trials in 2013 and 2017 for the killing of 11 security force members, during clashes that erupted after authorities forcibly dismantled a large protest encampment in Gdeim Izik, Western Sahara, in 2010. Both courts relied almost entirely on their confessions to police to convict them, without seriously investigating claims that the defendants had signed their confessions under torture without being permitted to read them.

Authorities allowed Claude Mangin, an activist for Sahrawi rights and the French wife of prisoner Naama Asfari, a member of the “Gdeim Izik” group, to enter Morocco in February for the first time in 30 months to visit him. However, they prevented her from re-entering Morocco in July.

On July 8, a court in El Ayoun, Western Sahara, sentenced Nezha Khalidi, a member of Equipe Media, a collective of media activists who favor self-determination for Western Sahara, to a fine for exercising journalism without official credentials. Police arrested her while she was live-streaming a street scene and denouncing Moroccan “oppression.”

The government has yet to approve a draft of Morocco’s first law on the right to asylum. As of June 2019, the ministry of foreign affairs had granted, or started the administrative process for granting refugee cards, along with special residency permits and work authorizations to 803 persons, most of them sub-Saharan Africans, whom the UN High Commissioner for Refugees (UNHCR) had recognized. All of the 6,244 refugees recognized by the UNHCR since 2007 have access to public education and health services and most of them have regular residency permits and work authorizations, according to the UNHCR representation in Morocco.

The Family Code discriminates against women with regard to inheritance and procedures to obtain divorce. The code sets 18 as a minimum age of marriage but allows judges to grant “exemptions” to marry minor girls aged 15 to 18, at the request of their family. In 2018, 40,000 such exemptions were granted, amounting to almost 20 percent of marriages recorded during the year, in what Justice Minister Mohamed Aujjar called "an alarming increase."

A law on violence against women criminalizes some forms of domestic violence and establishes preventive measures, but does not set out duties of police, prosecutors, and investigative judges in domestic violence cases, or fund women’s shelters.

Morocco criminalizes abortion, thus endangering women’s human rights including to life, health, freedom from cruel, inhuman, and degrading treatment, and privacy. According to the Moroccan Association to Combat Clandestine Abortions, between 600 and 800 abortions a day take place on average in Morocco, with about two-thirds of them by licensed doctors.

A law that took effect in 2018 provides domestic workers with labor protections, including mandatory labor contracts, mandatory days off, minimum age, minimum wage, and maximum working hours guarantees. It imposes fines on employers who violate the law, and prison sentences for some repeat offenders. However, the government did not engage in any noticeable communication efforts to make sure the general public, including domestic workers and employers, are aware of the existence of the law.

In a report released in June, the office of the General Prosecutor stated that 17,721 adults were prosecuted for having non-transactional sexual relations outside of marriage in 2018. The number includes 3,048 who were charged with adultery, 170 with same-sex relations, and all of the rest for sex between unmarried persons.

In Morocco, consensual sex between adults who are not married to one another is punishable by up to one year in prison.  Article 489 of the penal code stipulates prison terms of six months to three years for “lewd or unnatural acts with an individual of the same sex.”

In an attempt to comply with European Court of Justice rulings stating that trade agreements between European Union countries and Morocco can only apply to Western Sahara with “the consent of its people,” the European Commission and parliament conducted consultations with some elements of the population of Western Sahara. The Polisario Front refused to take part in the consultations.

In January and in February, claiming to have taken “all reasonable and feasible measures” in order to ascertain the concerned people’s consent, the EU Council and the European Parliament approved trade agreements with Morocco, which allow for the exploitation of Western Sahara’s agricultural and fisheries resources. In April, the Polisario announced legal actions against these decisions before the European Court of Justice.

11/10/2021: This version of the chapter updates the number of adults reported by the General Prosecutor as having been prosecuted for having non-transactional sexual relations outside of marriage in 2018.