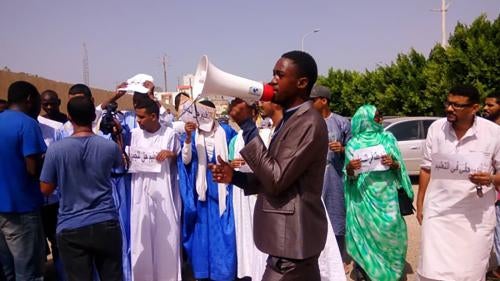 Former Defense Minister Mohamed Ould Ghazouani won presidential elections in June, succeeding two-term incumbent Mohamed Ould Abdel Aziz. Abdel Aziz, who came to power in 2008 following a coup, did not run in 2019. In an effort to crush protests over the first-round victory by Ghazouani, whom Abdel Aziz backed, authorities detained without charge pro-opposition leaders and arrested dozens of opposition activists, releasing most but sentencing others to prison terms. Authorities also suspended mobile and fixed-line internet service the day after the elections for 10 days.

Slavery has not been eliminated despite multiple laws banning it and specialized courts to prosecute those who subject people to slavery.

Prosecutors use repressive legislation that includes criminal defamation and broad definitions of terrorism and “inciting racial hatred” to censor and prosecute critics for nonviolent speech.  An anti-discrimination law adopted in 2017 states in Article 10, “Whoever encourages an incendiary discourse against the official rite of the Islamic Republic of Mauritania shall be punished by one to five years in prison.”

On February 1, authorities dropped charges and released activist Abdallahi Salem Ould Yali, jailed in January 2018 on charges of incitement to violence and racial hatred under the penal code, counterterrorism law, and cybercrime law. Yali was arrested for WhatsApp messages in which he called on Haratines, the ethnic group to which he belongs, to resist discrimination and demand their rights.

Authorities on March 22 arrested two bloggers, Abderrahmane Weddady and Cheikh Ould Jiddou, for Facebook posts criticizing corruption and accused them of knowingly spreading false information about Mauritanian funds allegedly frozen in the United Arab Emirates. The two are known to criticize Mauritania’s leaders, including alleging wrongdoing by then-former President Mohamed Ould Abdel Aziz. Authorities granted pretrial release to Wedaddy and Ould Jiddou on June 3 but confiscated their travel documents. No trial date had been set at time of writing.

The government severed mobile internet service for 10 days on June 23, one day after the presidential elections. While fixed-line internet service was still available in some offices and businesses, most Mauritanians could not access it because they rely on their phones for internet access. Authorities justified the shutdown as necessary for security.

On July 29, authorities freed blogger Mohamed Cheikh Ould Mkhaitir who had been held in a blasphemy case for five-and-a-half years. Authorities arrested him in January 2014 for denouncing what he said was the misuse of Islam to justify caste discrimination in Mauritania. A court initially sentenced him to death for blasphemy. An appeals court revised the sentence to two years in prison, which he had already served. But instead of releasing him, authorities held him in solitary and arbitrary detention for another 21 months, ostensibly for his own protection, then transferred him directly out of the country. At time of writing he was seeking asylum in France.

In October, students demonstrated regularly in Nouakchott against a 2018 rule that prevented students who had reached the age of 25 from enrolling for the first time in public universities, a rule that seemed to affect low-income students disproportionately. Police dispersed the protests, apparently using excessive force, on several occasions. On November 6, the government suspended the discriminatory rule for the academic year 2019/2020.

The ministry has withheld recognition from several associations that campaign on controversial issues, such as the Initiative for the Resurgence of the Abolitionist Movement (IRA) and “Hands Off My Nationality,” which accuses the government of discriminating against blacks in the national civil registration process. Members of the IRA, including its leader Biram Dah Abeid, have been subject to arrests and harassment.

Human Rights Watch representatives conducted research in Mauritania in 2019 without obstacles but were unable to meet with high level government officials. Nouakchott airport officials in March 2019 barred a delegation of Amnesty International from entering the country citing lack of “authorization.”

Mauritanian authorities in October granted a passport to Mohamedou Ould Slahi, three years after he returned to his native Mauritania, after he spent more than 14 years in arbitrary detention in Jordan, Afghanistan, and the US-run Guantanamo detention center. Mohamedou says he requires medical care related to his long detention that is unavailable in Mauritania.

In the aftermath of the June 22, 2019 presidential election and ensuing protests, some of which resulted in clashes with security forces, Mauritanian authorities temporarily detained pro-opposition public figures and dozens of opposition activists who denounced the official results as fraudulent.

The Interior Ministry announced on June 25 that security forces had arrested 100 protesters. Authorities have released some of them but others remained held on charges such as taking part in unauthorized demonstrations, damaging public property, and disturbing the peace. Courts sentenced at least 13 of the protesters to six months in prison. In November, authorities released all remaining people held in conjunction with election protests.

Authorities arrested Samba Thiam, an opposition political activist working with an opposition candidate and founder of the unrecognized political party Progressive Forces for Change, on June 25, three days after the presidential election. They released him without charge on July 3. Thiam said authorities required him to sign a pledge to cease activities and speech “promoting violence and extreme views,” both of which he denied doing.

Authorities on June 26 also arrested journalist Seidi Moussa Camara, who writes critically of authorities, but released him without charge on July 3. Camara is an ally of the anti-slavery group Initiative for the Resurgence of the Abolitionist Movement (IRA), whose leader, Biram Dah Abeid, came in second in the election.

On July 3, security agents arrested journalist Ahmedou Ould Wedia from Mauritania’s Al-Mourabitoun television channel. He was questioned by a prosecutor and released without charge on July 15. Wedia is reportedly close to the opposition party Tawassoul, whose candidate came in third in the elections.

Mauritania abolished slavery in 1981, the world’s last country to do so, and criminalized it in 2007. The Global Slavery Index, which measures forced labour and forced marriage, estimates that there are 90,000 living in “modern slavery” in Mauritania, or 2.4 percent of the population. Three special courts that prosecute slavery-related crimes have tried a handful of cases since their creation under a 2015 law. According to the 2019 US State Department Trafficking in Persons Report, Mauritania investigated four cases, prosecuted one alleged trafficker, but did not convict any. Nine appeals cases remained pending at the anti-slavery court.

Mauritania’s laws impose the death penalty for a range of offenses, including, under certain conditions, blasphemy, adultery, and homosexuality. A de facto moratorium remains in effect on capital punishment and on corporal punishments that are inspired by Islamic Sharia law and found in the penal code

The 2017 law on reproductive health recognizes it as a right, even as Mauritania maintained its ban on abortion. The country’s general code on children’s protection criminalizes female genital mutilation (FGM); however, according to the United Nations, it is still prevalent, particularly in rural communities.

Mauritanian law does not adequately define the crime of rape and other forms of sexual assault, although a draft law on gender-based violence, which contains more specific definitions, was pending before parliament. The criminalization of consensual adult sexual relations outside marriage likely deters girls and women from reporting assaults, because they can find themselves charged if the judiciary views the sexual act in question as consensual.

Mauritania is a member of the G5 Sahel, an alliance of five countries headquartered in Nouakchott that cooperate on security, including counterterrorism. As of January 1, 2019, Mauritania lost trade preference benefits from the US under the African Growth and Opportunity Act (AGOA) as “Mauritania has made insufficient progress toward combating forced labor, in particular the scourge of hereditary slavery…. [and] continues to restrict the ability of civil society to work freely to address anti-slavery issues.”