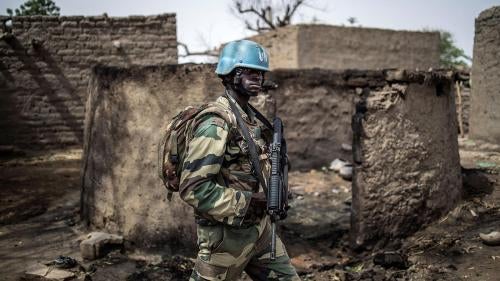 Mali’s human rights situation deteriorated in 2019 as hundreds of civilians were killed in numerous incidents by ethnic self-defense groups, most for their perceived support of Islamist groups, and attacks by armed Islamists intensified in northern and central parts of the county allied to Al-Qaeda and the Islamic State, targeted Malian security services, peacekeepers, international forces, and increasingly, civilians. Malian security forces subjected numerous suspects to severe mistreatment and several died in custody or were forcibly disappeared.

The worsening security situation in the country provoked a political crisis and led to delays in the constitutional review process and parliamentary elections. The peace process envisioned to end the 2012-2013 crisis in the north made scant progress, including on disarmament and the restoration of state authority.

Over 85,000 civilians fled their homes as a result of violence in 2019. Humanitarian agencies were attacked, largely by bandits, undermining their ability to deliver aid. Rampant banditry continued to undermine livelihoods, and protests against the government over corruption continued.

Little progress was made toward providing justice for victims of abuses, and rule-of-law institutions remained weak. A new justice minister improved detention conditions and pledged to prioritize the fight against impunity. The military justice system made some progress in investigating dozens of past extrajudicial killings by their forces.

Atrocities against civilians and the deteriorating security situation in the Sahel, garnered significant attention from Mali’s international partners, notably the United Nations, France, Germany, the European Union, and the United States. These actors regularly denounced atrocities through public statements but were inconsistent in their calls for accountability.

During 2019, at least 400 civilians were killed in incidents of communal violence in central and northern Mali. The violence pitted ethnically aligned self-defense groups against mainly ethnic Peuhl or Fulani communities accused of supporting Islamist armed groups.

The most lethal attacks in central Mali were perpetrated by Dogon militiamen including the worst single atrocity in Mali’s recent history as at least 150 civilians were massacred on March 23 in Ogossagou village; a January 1 attack on Koulogon village killed 37 civilians, and June attacks in Bologo and Saran villages left over 20 dead. After the Ogossagou massacre, the government pledged but failed to disarm and dissolve the implicated militia.  Peuhl militiamen were implicated in the June 9 massacre of 35 Dogon civilians in Sobane-da village.

Scores of farmers, herders and traders were killed by different ethnic militias in reprisal killings as they tended their fields or animals and went to market, provoking widespread displacement and a hunger crisis.

Attacks by armed Islamists allied to Al-Qaeda, and to a lesser extent the Islamist State affiliate in the Sahel, killed over 150 civilians, as well as scores of government forces and at least 16 United Nations Multidimensional Integrated Stabilization Mission in Mali (MINUSMA) peacekeepers, including the January 20 attack on the Aguelhok UN base that killed 11 Chadian peacekeepers.

Armed Islamists massacred numerous civilians, including in Menaka region and at least 38 in Yoro and Gangafani II villages near the Burkina Faso border. In several instances, they removed men from public transportation vehicles and killed them, including around the towns of Sévaré and Bandiagara.

Over 50 civilians were killed by improvised explosive devices planted on roadways, especially in central Mali. On September 3, an explosion killed 14 bus passengers near Dallah, and a June attack near Yoro killed 11. Armed Islamists planted explosives in the bodies of security force members, and in February a civilian’s body, which exploded during his burial, killing 17.

Armed Islamists continued to threaten, and sometimes kill local leaders deemed government collaborators and beat those engaged in cultural practices they had forbidden. They also imposed their version of Sharia (Islamic law) via courts that did not adhere to fair trial standards.

Since late 2018, numerous men detained by the security forces during counterterrorism operations were subjected to enforced disappearance, five were allegedly executed or died in custody, and dozens more were subjected to severe mistreatment in detention.  Numerous men accused of terrorism-related offenses were detained by the national intelligence agency in unauthorized detention facilities and without respect for due process.

Military investigations into the alleged extrajudicial killing of almost 50 suspects in Diourra, Boulikessi and Nantaka in 2018 progressed but at time of writing no soldier had been prosecuted.

Progress in the professionalization of the security forces was evident in the increased presence of military police responsible for ensuring discipline during military operations and increased patrols to protect civilians.

Over 150 children were killed during communal violence, by explosive devices or in crossfire. The UN Children’s Fund (UNICEF) reported 99 cases of recruitment and use of children by armed groups in the first six months of 2019, more than double those reported the previous year. Over 900 schools remained closed and 270,000 children were denied the right to education because of insecurity and displacement.

The Malian judiciary remained plagued by neglect and mismanagement, and many posts in northern and central Mali were abandoned due to insecurity. Hundreds of detainees were held in extended pretrial detention due to the courts’ inability to adequately process cases.

In July, the parliament passed a law of “national understanding,” which civil society groups contended could lead to impunity for some serious human rights violations.

There was scant progress on delivering justice for atrocities committed since 2012-2013, however several investigations were opened by local courts and the Specialized  Judicial Unit, including into the Ogossagou massacre. Local groups said the government was reluctant to question or charge militia leaders credibly implicated in massacres, favoring short-term reconciliation efforts envisioned to mitigate communal tension.

In contrast, the Specialized Unit was actively investigating over 200 terrorism-related cases and in 2018, completed 10 trials.

The National Commission for Human Rights (CNDH) investigated some abuses, issued several communiques, visited detention centers, and set up a program to provide legal support to the indigent.

The Truth, Justice and Reconciliation Commission, established in 2014 to investigate crimes and root causes of violence since 1960, has taken over 14,000 victim and witness statements, but its credibility was weakened by the inclusion of armed group members and exclusion of victims’ representatives. Public hearings were scheduled to begin in December.

France and the US led on military matters, the EU on training and security sector reform, and the UN on rule of law and political stability.

The G5 Sahel multinational counterterrorism military force, created in 2017, comprising forces from Mali, Mauritania, Burkina Faso, Niger, and Chad, did not become fully operational as a result of insufficient financial support and equipment.

In September, the Economic Community of West African States (ECOWAS), pledged US$1 billion to help support G5 Sahel and national militaries in countering terrorism from 2020- 2024.

In August, the UN Security Council renewed for one year the mandate of the Mali Sanctions Committee Panel of Experts and imposed an asset freeze and travel ban against those individuals and entities who obstruct the 2015 peace accord and commit human rights abuses.  In July, the Council put five men—two businessmen, two armed Islamists, and a parliamentarian—on the sanction list.

MINUSMA meaningfully supported the government, including in atrocity investigations, and community reconciliation efforts, and increased patrolling. However, its robust civilian protection mandate was challenged due to persistent attacks against peacekeepers and lack of equipment.

The International Commission of Inquiry, established in 2018 by the UN secretary-general as provided by the 2015 peace accord, investigated serious violations of international human rights and humanitarian law between 2012 and January 2018.

In June, the UN Security Council renewed and strengthened MINUSMA’s mandate by including the deteriorating security situation in Mali’s center as a second strategic priority.

The 13,000-strong force was also tasked with increasing efforts to protect civilians and support efforts to bring perpetrators to justice.

The International Criminal Court (ICC) continued investigation into alleged war crimes committed in Mali, opened in 2013, and in March, the ICC Registrar visited Mali. However, it had not yet sought arrest warrants for any individuals at time of writing.