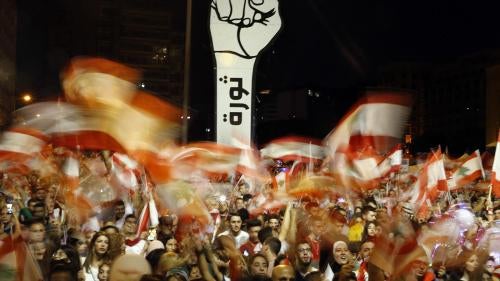 The rights situation in Lebanon deteriorated in 2019, culminating in widespread anti-government protests that began on October 17. Security forces at times used excessive and unnecessary force against protesters and on several occasions failed to stop attacks on demonstrators.

Lebanese authorities have prosecuted individuals for peaceful speech, and security agencies interrogating these individuals have in some cases subjected them to abuse and detained them pretrial. Accountability for torture remains elusive, despite the passage of an anti-torture law.

Although Lebanon passed a law banning the open burning of waste, the practice is still widespread, endangering the health of residents.

Anti-government protests began on October 17 prompted by the announcement of new taxes. The protests quickly devolved into anger against the entire political establishment, whom protesters blame for corruption and the country’s dire economic situation. Prime Minister Said Hariri resigned on October 29 in response to the mass protests.

In 2019, authorities continued to detain and charge individuals for speech critical of government officials, especially in relation to corruption allegations, and religious institutions. Lawyers also used defamation laws to file complaints against individuals and publications expressing concern about the country’s economic situation.

Security agencies, including the Internal Security Forces’ cybercrimes bureau, have summoned activists for interrogation over peaceful speech, in some cases subjecting them to abuse, violating their privacy, detaining them pretrial, and compelling them to sign commitments to cease their criticisms.

Defaming or criticizing the Lebanese president or army is a criminal offense carrying penalties of up to two and three years in prison, respectively. The Lebanese penal code criminalizes libel and defamation, authorizing imprisonment of up to three months, and up to one year in the case of public officials.

Despite parliament passing an anti-torture law in 2017, torture by security forces persists, judicial authorities continue to ignore the law’s provisions, and accountability for torture remains elusive.

Judicial authorities failed to investigate torture allegations by Hassan al-Dika, arrested on drug-related charges, against members of the Internal Security Forces (ISF) prior to his death in custody on May 11.

Ziad Itani, a prominent actor falsely accused of spying for Israel, alleged that State Security officers tortured him in 2017. Despite his filing a lawsuit against his alleged torturers in November 2018, the judiciary has taken no substantive action on his case.

On March 7, Lebanon’s Council of Ministers appointed the five members of the national preventative mechanism to monitor and investigate the use of torture, but it has still not allocated funding for the mechanism.

Lebanon continues to try civilians, including children, in military courts, in violation of their due process rights and international law.

On March 7, military courts sentenced two journalists to three months’ imprisonment in absentia for allegedly insulting a security agency on Facebook. On appeal in April, the military court declared a lack of jurisdiction and referred the case back to the military prosecutor.

Women, who have played a leading role in the protests that began on October 17, continue to face discrimination under 15 distinct religion-based personal status laws. Discrimination includes inequality in access to divorce, child custody, and inheritance and property rights. Unlike men, Lebanese women also cannot pass on their nationality to foreign husbands and children.

Lebanon has no minimum age for marriage, and some religious courts allow girls younger than 15 to marry. Parliament failed to take up draft bills that would set the age of marriage at 18.

In 2017, Lebanon’s parliament repealed article 522, which had allowed rapists to escape prosecution by marrying the victim, but left a loophole with regard to offences relating to sex with children aged 15-17 and sex with virgin girls with promises of marriage.

A 2014 Law on the Protection of Women and Family from Domestic Violence established important protection measures and introduced policing and court reforms but failed to criminalize all forms of domestic violence, including marital rape.

Article 534 of the penal code punishes “any sexual intercourse contrary to the order of nature” with up to one year in prison. In March, the top military prosecutor acquitted four military personnel accused of sodomy and ruled that homosexuality is not a crime. This follows a district court of appeals’ similar groundbreaking ruling in July 2018, and four judgments from lower courts declining to convict gay and transgender people under article 534 since 2007.

General Security banned entry to at least six individuals after they participated in a gender and sexuality conference in September 2018, which it attempted to shut down.

The kafala (sponsorship) system subjects them to restrictive immigration rules under which they cannot leave or change employers without permission of their employer, placing them at risk of exploitation and abuse.

On May 5, migrant domestic workers organized a protest in Beirut demanding better working conditions and the abolishment of the kafala system.

A former minister of labor created a committee to reform Lebanon’s labor law and “break” the kafala system, but no reforms have been announced yet.

Nearly 1 million Syrian refugees are registered with the United Nations High Commissioner for Refugees (UNHCR) in Lebanon. The government estimates the true number of Syrians in the country to be 1.5 million.

Lebanon’s residency policy makes it difficult for Syrians to maintain legal status, heightening risks of exploitation and abuse and restricting refugees’ access to work, education, and healthcare. Seventy-three percent of Syrians in Lebanon now lack legal residency and risk detention for unlawful presence in the country.

The Higher Defense Council took several decisions that increased pressure on Syrian refugees in Lebanon, including the deportation of Syrians who enter Lebanon illegally, the demolition of refugee shelters, and a crackdown on Syrians working without authorization. On August 26, General Security said it deported 2,731 Syrians since May 21, placing them at risk of arbitrary detention and torture. These coercive measures come amid xenophobic rhetoric from leading politicians calling for the return of Syrian refugees.

General Security estimates that over 170,000 Syrians returned to their country from Lebanon between December 2017 and March 2019. Syrians said they are returning because of harsh policies and deteriorating conditions in Lebanon, not because they think Syria is safe.

More than 300,000 school-age Syrian children were out of school during the 2017-2018 school year, largely due to parents’ inability to pay for transport, child labor, school directors imposing arbitrary enrollment requirements, and lack of language support. As of mid-October 2019, Syrian students had not begun afternoon shifts at public schools. The Education Ministry blamed a shortfall in donor funding.

Children with disabilities are often denied admission to schools and for those who manage to enroll, most schools do not take reasonable steps to provide them with a quality education.

Although Lebanon has banned corporal punishment in schools, the ban is often disregarded, largely due to a lack of accountability for abusers.

Despite the passage of a solid waste management law in 2018 banning the open burning of waste, municipalities still engage in the practice, posing health risks to residents, especially children and older persons. Open burning is more common in poor areas of the country.

On August 27, the cabinet endorsed the Environment Ministry’s roadmap to create 25 sanitary landfills and three waste incinerators. However, the cabinet did not agree on how to tackle Beirut’s looming trash crisis as both major landfills reach capacity.

An estimated 17,000 Lebanese were kidnapped or “disappeared” during the 1975-1990 civil war. On November 12, 2018, parliament passed a landmark law creating an independent national commission to investigate the fate of the disappeared.

On August 29, the Justice Ministry nominated 10 individuals to serve on the committee. Their nominations must be approved by Cabinet.

Tensions between Hezbollah and Israel increased following the crash of two Israeli drones in Beirut’s southern suburbs on August 25.