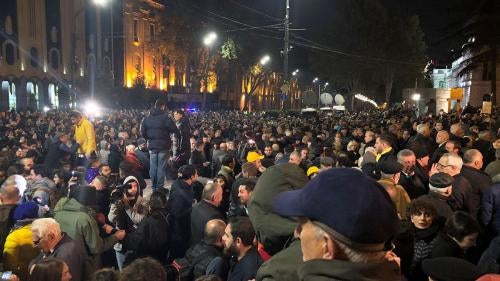 Political tensions and sustained protests over electoral reforms marked 2019 in Georgia. The government used excessive force to disperse a largely nonviolent protest in June, detaining and injuring scores, and pursuing largely one-sided accountability for it. To avoid further political crisis, the chairman of the parliament resigned and the Georgian Dream majority initially conceded to holding the 2020 parliamentary vote by a fully proportional election system, but later voted down the initiative, sparking further protests. Protesters demanded snap elections and changes to the existing mixed electoral system that disproportionately favors the ruling party.

Impunity for abuse by law enforcement officials remained a persistent problem. Authorities twice postponed the launching of the State Inspector’s Office, created in 2018 to investigate abuses committed by law enforcement and other public officials, citing lack of financing. It became operational on November 1.

By September, the Ombudsman’s Office received 54 complaints of ill-treatment by prison staff or police and petitioned the prosecutor’s office to launch investigations in 52 cases. None resulted in criminal prosecution.

On the night of June 20, riot police fired rubber bullets and used tear gas against thousands of protesters outside the parliament building in Tbilisi. The protest was sparked by the presence of a delegation from the Russian Duma in the parliament’s plenary chamber, as part of the Inter-Parliamentary Assembly of Orthodoxy.

Some protesters repeatedly tried to break through the police cordon, grabbing and damaging some riot gear. Otherwise the crowd was largely nonviolent. While riot police showed restraint initially, around midnight, without prior warning, they opened fire on the crowd with tear gas and rubber bullets, chasing and arresting people who tried to gather.

Some 240 people, including 80 police officers and 32 journalists, sustained injuries and sought medical attention. Many civilians sustained rubber bullet injuries to the head, legs, and back; two people each lost an eye.

Police arrested hundreds, and courts sentenced 121 protesters to up to 15 days in jail on misdemeanor violations.

According to the Georgian Trade Union Confederation, 36 workers died and 107 were injured in work-related accidents through October. Georgian labor law does not sufficiently regulate working hours, rest time, weekly breaks, and night work, and does not provide for government oversight of all labor conditions. Lax regulations and resulting labor practices that often prioritize production targets undermine workers’ safety. For example, workers in some manganese mines work 12-hour shifts underground, including at night, for 15 straight days, resulting in exhaustion and increasing the likelihood of workplace accidents and injuries. In May, some 2,500 miners from some of these mines went on strike for 12 days, demanding better working conditions and a pay rise.

Authorities drafted legislative amendments to address some of the gaps in the law regarding overtime, time off, and other issues, and to strengthen the labor inspectorate. The changes had not been introduced for parliamentary debate at time of writing.

The European Court of Human Rights’ July decision finding no breach of fair trial guarantees in the ownership dispute over Rustavi 2—Georgia’s most-watched television station—shook Georgia’s media landscape. As a result, ownership reverted to a former owner, Kibar Khalvashi, who claimed that he had been forced to sell the station in 2006 below market value. Rustavi 2’s general director, Nika Gvaramia, alleged the lawsuit was orchestrated by the government to take over the station because it was seen as aligned with the opposition.

Khalvashi appointed a new director general, Paata Salia, who pledged not to interfere with the station’s editorial policy. However, Salia soon dismissed the newsroom head and producers and hosts of political and entertainment talk shows, claiming they had conflicts of interest because of their public statements against the new owner. The move prompted almost the entire newsroom to quit, resulting in temporary suspension of news broadcasts.

In August, the prosecutor’s office brought “abuse of power” charges against Gvaramia, claiming he had struck a sham deal in 2015 on commercial ad placement on the station, allegedly resulting in the loss of 7.2 million GEL (approximately US$ 2.5 million). A court ordered Gvaramia to post 40,000 GEL (approximately US$ 13,500) bail. Some civil society organizations saw the “accelerated manner of the investigation” as politically motivated, likely “aimed at persecuting opponents and critical media.”

Authorities also brought charges against Avtandil Tsereteli, father of the founder of TV Pirveli, another independent and critical broadcaster. The prosecutor’s office alleged that Tsereteli assisted former TBC Bank Board Chair Mamuka Khazaradze and his deputy in “legalization of illicit income” of US$ 17 million in 2008. Civil society groups criticized the move as another attempt at “exert[ing] pressure on the independent and critical broadcaster.”

Although the overall numbers of drug-related prosecutions continued to decline, authorities maintained harsh drug laws that can be used to prosecute people for mere consumption (except for marijuana) or possession of drugs for personal use. Drug-related felonies often result in long sentences, prohibitive fines, and deprivation of other rights, including the right to drive a vehicle or work in an array of professions.

Draft legislative reform that would introduce public health approaches to drug use and largely overhaul punitive practices remained stalled in parliament at time of writing.

Activists planned Georgia’s first-ever Pride Week— including various social, political, and cultural events and a Pride March— for June 22. On May 31, the Interior Ministry issued a statement saying that the events could not be held outdoors, citing the risks to people involved in the events. In its June 14 statement, the Georgian Orthodox Church urged the authorities “not to allow” Tbilisi Pride, calling it “absolutely unacceptable.” Two days later, homophobic groups led by ultra-conservative businessman Levan Vasadze held a rally, announcing the formation of vigilante patrols against Tbilisi Pride and gay people. Police launched an investigation into Vasadze’s statements that had no outcome at time of writing.

The indoor Pride events took place. On July 8 around 40 activists and LGBT supporters held a pride march outside the Interior Ministry.

In November, ultra-nationalist hate groups and their supporters organized protests against the screening of a Swedish-Georgian gay love-themed film, “And Then We Danced,” in Tbilisi and Batumi, harassing and at times attacking moviegoers. Police said they detained 27 people on misdemeanor, disobedience, and hooliganism charges, and one person faced criminal violence charge.

In March, the European Union and Georgia met to assess progress in implementing the Association Agreement. The sides welcomed “structural reforms and underlined the importance of ongoing reforms.” The EU also highlighted the importance of an inclusive political environment, free and independent media and respect for rule of law and judicial independence.

In April, following its visit to Georgia, the United Nations Working Group on Business and Human Rights expressed concern about the adequacy of the regulatory framework for labor inspections.

In a May joint statement, the UN, EU, United States, and Council of Europe (CoE) representations in Tbilisi called for an end to violence and discrimination against LGBTQI+ persons in Georgia.

The June joint statement to mark the 10-year anniversary of the US-Georgia strategic partnership highlighted “a resilient and pluralistic democracy, free and fair elections, an independent media, respect for human rights… transparent and accountable governance, and vibrant civil society” as essential elements of Georgia’s development.

In a June statement, the US embassy expressed concerns about “the context and timing” of criminal charges pressed against the TBC Bank founders. The EU embassy also called for the case to be handled “in a transparent manner.”

In June, the Organization for Security and Co-operation in Europe’s representative on freedom of the media, Harlem Désir, deplored violence against media workers during demonstrations in Tbilisi. He called on authorities to ensure the safety of journalists at all times, and promptly and effectively investigate all incidents.

In a November joint statement, the EU and US embassies in Georgia noted the “deep disappointment of a wide segment of Georgian society” over failed electoral reform and called for “calm and respectful dialogue” to find “an acceptable path forward.”

In a resolution adopted during its March session, the United Nations Human Rights Council expressed concerns about the ongoing borderization along the administrative boundary line with Georgia’s conflict regions of Abkhazia and South Ossetia, and called for the UN High Commissioner’s access to the regions.

The International Criminal Court (ICC) continued its investigation into war crimes and crimes against humanity committed in connection with the August 2008 Russia-Georgia war over South Ossetia. In January, Georgia and the ICC entered into an agreement to permit persons convicted by the ICC in any of its cases to serve their sentences in Georgia, subject to further decisions by the court and the government in specific instances.