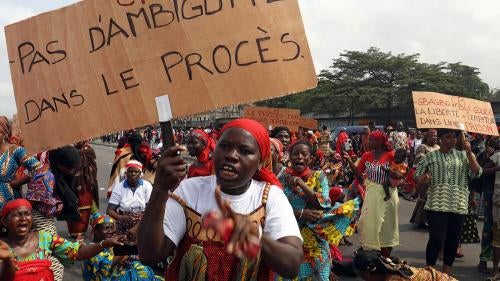 Côte d’Ivoire’s continued strong economic growth in 2019 led to some improvements in social and economic rights. The government, however, failed to tackle the root causes of past political violence, notably entrenched impunity, a politicized judiciary, and longstanding political and ethnic tensions.

Divisive political rhetoric, residual tensions from the 2018 local elections, and recurring disputes over access to land led to an increase in intercommunal tensions. At least 14 people died and dozens were injured during clashes between communities in Béoumi, in northern Côte d’Ivoire, on May 15 and 16.

A flurry of law reforms led to some improvements in the legal protection of human rights. The government passed laws that defined torture as a stand-alone crime and introduced measures that could reduce reliance on pretrial detention and improve marriage equality. Some provisions of the new laws, however, could be used to restrict freedom of assembly and expression. The arrest of several opposition or civil society figures for organizing anti-government protests raised concerns of a closing of civic space ahead of the 2020 presidential elections.

An ICC trial chamber on January 15 acquitted Gbagbo and Blé Goudé of crimes against humanity after an almost three-year trial, ending the case before the defense was even required to present evidence. In its written decision on July 16, the two-judge majority strongly criticized the weakness of the prosecution evidence.

The ICC prosecutor appealed the acquittals on September 16, asking judges to declare a mistrial. At time of writing, Gbagbo and Blé Goudé were on conditional release, in Belgium and the Netherlands respectively.

The ICC continued its investigations into crimes committed by pro-Ouattara forces during the post-election crisis, but has yet to issue arrest warrants. President Alassane Ouattara has said that no further suspects will be transferred to The Hague.

In the year after President Ouattara’s August 2018 amnesty for crimes committed during the 2010-11 post-election violence, there was little progress in domestic investigations by the Special Investigative and Examination Cell. The cell, established in 2011, had in previous years charged more than two dozen senior military officers and political leaders with crimes against humanity or war crimes.

The Ivorian government stated in February that the amnesty law does not preclude Ivorian judges from investigating the worst crimes committed during the crisis, noting that it does not apply to individuals who are “members of the military and armed groups.” On November 6, Ivorian judges confirmed charges against Blé Goudé in Côte d’Ivoire for alleged crimes during the 2010-11 post-election crisis, including murder, rape, and torture. Other than the Blé Goudé’s case, however, the Special Cell has frozen its investigations, making it unlikely that alleged perpetrators will ever face trial.

On April 4, three human rights groups, two Ivorian and one international, filed a Supreme Court complaint contesting President Ouattara’s authority to issue the amnesty, arguing that it violated Côte d’Ivoire international human rights treaty obligations. At time of writing, the case had not yet been decided.

Neither Côte d’Ivoire’s Special Cell nor the ICC have investigated crimes committed during election-related violence in 2000, or the 2002-2003 armed conflict. A government reparations program continued to give victims of the 2002-2011 conflicts financial payments, medical treatment, and other forms of assistance.

The justice system lacks independence and judges regularly experience pressure from the executive. Judges report that the risk of interference is greatest in political cases, but can occur in any civil or criminal trial.

Prison conditions and overcrowding remained a problem. For example, Abidjan’s central prison in October housed 7,100 in a facility designed for 1,500, with 2,500 in pretrial detention. Despite some efforts to rehabilitate prisons, detainees still lack adequate access to medical care and inmates suffer extortion by prison guards and fellow inmates.

On December 21, 2018, the National Assembly adopted a new Code of Criminal Procedure that replaced the Cour d’Assises, a criminal court that sat only periodically, with permanent criminal courts able to try the most serious offenses. Magistrates said that, with adequate staffing, this could reduce the backlog of criminal cases awaiting trial. The new law could also introduce time limits on pretrial detention and, if properly implemented, would offer sentencing alternatives to prison, such as probation or community service.

Much needed efforts continued to professionalize the army and improve discipline in the security forces, both through training and the reform of army leadership.

Several former “comzones,” powerful military commanders implicated in serious human rights abuses from 2002 to 2011, were demoted in March. However, some of them remain in positions of authority within the armed forces.

Security forces opened fire on protesters demonstrating against the arrest of an opposition politician in Bouaké on October 3, killing one person and injuring several others.

Members of the security forces continued to engage in racketeering and extortion, particularly at checkpoints on secondary roads. Online activist Soro Tangboho was arrested in November 2018 for live streaming police officers whom, he claimed, were extorting money from motorists. He was convicted on June 7 for public order offenses; his initial one-year sentence was increased to two after a July 31 appeal. Members of the army, police, or gendarmerie were rarely punished for corruption and other more serious offenses.

The National Assembly and Senate in July and August enacted reforms to modify the composition of the election commission, as required by a 2016 judgment by the African Court on Human and Peoples’ Rights. Opposition and some civil society organizations strongly criticized the reforms, arguing that the government’s role in nominating members of the commission means it will still be subject to executive influence. Two of the largest opposition parties in September refused to nominate members of the commission.

On June 26, President Ouattara promulgated a new criminal code that makes the organization of an “undeclared or prohibited” demonstration punishable by one to three years’ imprisonment and a financial penalty. International human rights standards require that protest organizers should not be sanctioned for merely failing to notify authorities in advance.

The new criminal code also creates vague offenses, punishable by imprisonment, which threaten freedom of speech, including offenses for “sharing false news where that results or could result in” disturbance to public order and “causing offense to the president or vice-president.”

Opposition parliamentarian Alain Lobognon was sentenced to a year’s imprisonment on January 29, reduced to a six-month suspended sentence on appeal, for disclosing “fake news” after alleging on social media that police were planning to imprison an opposition mayor whom the government had accused of corruption.

A rural land agency, established in 2016 finally began to implement programs to speed up implementation of a 1998 land law designed to reduce conflicts over land by registering customary land rights and issuing legal titles. The vast majority of rural land, however, remained unregistered.

Côte d’Ivoire in July 2019 adopted a new forestry code that signals a renewed effort to protect and rehabilitate the country’s protected forests, which have been devastated by cocoa farming. Past government-led forestry reclamation efforts left thousands of evicted farmers’ families without access to adequate food, water, or shelter.

The legislature in July passed new laws on marriage and inheritance that establish co-ownership of martial property. The laws also give a widow the right to one- quarter of the husband’s estate, with the remaining three-quarters going to the children. Under the old law, widows often received nothing. The law confirmed the age of consent for marriage as 18, but child marriage is still common.

The new criminal code creates a presumption of consent to sex between married couples, which could prevent victims of marital rape from pursuing successful prosecutions. It also criminalizes abortion except where necessary to protect the life of the mother or for victims of rape.

Consensual sexual relations between consenting individuals of the same sex are not criminalized in Côte d’Ivoire. The new criminal code removed references to acts between members of the same sex as an aggravating factor in cases of public indecency. However, the new marriage law defines marriage as between a man and a woman, and incidents of discrimination against lesbian, gay, bisexual, and transgender (LGBT) persons—including physical assaults—are common.

France, the US, and the EU remained major donors, including in the justice and security sector, although Côte d’Ivoire has increasingly strong economic ties with China.

Côte d’Ivoire completed a two-year term as a member of the United Nations Security Council in December 2019.