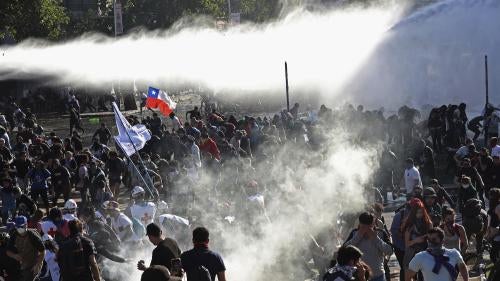 Chile’s national police (Carabineros) used excessive force in responding to massive demonstrations, some of them violent, that started in October and continued at time of writing. Thousands of people were injured, including more than 345 with serious eye injuries after police shot them with anti-riot shotguns. Many of those arrested reported serious abuses in detention, including brutal beatings and sexual abuse. While the government took some positive steps, including adopting a protocol on the use of force and deploying 250 specialists to instruct crowd control units on compliance with human rights standards, at time of writing it had yet to undertake other reforms to help prevent police misconduct and strengthen oversight.

Chile faces other important human rights challenges. Women encounter significant barriers to abortion in situations where abortion is allowed by law. Proposals to recognize same-sex marriage remain at an impasse. Tightened visa regulations on Venezuelans could in practice make it impossible for many to enter Chile. And overcrowding and inhumane conditions persist in many prisons.

Chile made human rights progress in some areas in 2019. Congress passed a gender identity law that allows individuals to change their name and gender in the civil registry, and a law outlawing public sexual harassment. Chile also took steps to hold accountable former police and military officers for abuses during Augusto Pinochet’s dictatorship. 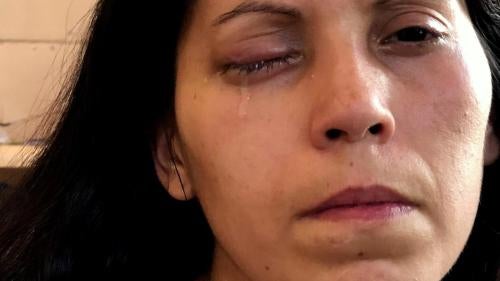 Abuses by Security Forces during Protests

Massive protests over public services and inequality broke out across Chile in October. While most demonstrators were peaceful, some groups attacked police with rocks, looted, and burned public and private property. Almost 2,000 officers were injured from October 18 to November 20.

Police responded using excessive force against demonstrators and bystanders, whether they were engaged in violence or not. Medical services treated more than 11,000 people injured from October 18 to November 22, including more than 345 people who suffered eye injuries, most hit by pellets police fired from anti-riot shotguns. At time of writing, police had suspended the use of those shotguns while experts analyzed the pellets’ composition.

The police also detained more than 15,000 people from October 18 to November 21 and ill-treated some of them. The National Human Rights Institute filed 442 complaints concerning inhumane treatment, torture, sexual abuse, and other crimes. Human Rights Watch collected credible testimony that police forced detainees, especially women and girls, to undress and squat fully naked, a practice banned by police protocols. We also documented brutal beatings and rape in detention. Prosecutors are investigating at least five killings supposedly caused by security forces in the context of demonstrations.

In December 2018, a Chilean judge convicted 53 former agents of the Chilean secret police (DINA) for the kidnapping, torture, and enforced disappearance of seven communist leaders in 1976, and the murder of former Communist Party leader, Victor Diaz, in 1977.

In January 2019, a Chilean judge convicted six men, including one security agent, four doctors, and a driver, for poisoning to death the former president of Chile, Eduardo Frei Montalva, in 1982.

Chile maintains a 50-year veil of secrecy over testimony by victims before the National Commission on Political Prison and Torture from November 2003 to May 2004. The testimony revealed places of detention and torture methods used by the dictatorship and identified former political prisoners and torture victims. The Bachelet administration (2014-2018) submitted a bill to lift the secrecy order in 2017, which generated heated debate between those who believe revealing the testimony would violate victims’ rights to privacy, and those who believe revealing it is necessary to fully punish the guilty and bring justice to victims.

In December 2018, a commission of the House of Representatives approved a bill that would punish anyone who “justifies,” “approves” of, or “denies” human rights violations committed during the dictatorship with up to 3 years in prison. The bill, which violates freedom of speech provisions of international human rights law, remained pending at time of writing.

Chile’s 28-year total ban on abortion came to an end in 2017 when the Constitutional Court upheld a new law decriminalizing abortion in three circumstances: when the pregnancy is the result of rape, the life of the pregnant woman is at risk, or the fetus is unviable. Although passage of the law signaled progress for reproductive rights in Chile, significant barriers to access remain even for legally permissible abortions.

The law in its current form allows doctors and private institutions to refuse to provide abortions on moral grounds. Of 1,148 specialist medical doctors working in public hospitals, over 50 percent object to providing abortions after rape, 28.5 percent when the fetus is unviable, and 20.5 percent when the life of the pregnant woman is at risk, according to a report issued by the Chilean Ministry of Health in June.

Chilean courts continue to prosecute Mapuche land-rights activists under the country’s counterterrorism law for violence and destruction of property during protests. The law has faced criticism for its overly broad definition of terrorism and insufficient due process guarantees. Both the Bachelet and Piñera administrations proposed modifications to update the law and clarify its scope. A bill amending the counterterrorism law remained pending in the Senate at time of writing.

In November 2018, Camilo Catrillanca, a 24-year-old Mapuche activist, was shot dead by police. The killing sparked widespread outrage and became a symbol of police brutality. Police said Catrillanca was killed in a shootout and that the incident had not been recorded. But in December 2018, videos surfaced that showed Catrillanca was unarmed when he was shot in the back. President Piñera removed the head of the police force, Gen. Hermes Soto. At time of writing, eight individuals, including seven ex-police and one lawyer accused of helping to conceal evidence, were on trial for their role in the killing.

In August, Chile’s gender identity law, promulgated by President Piñera in November 2018, passed its final stage of approval and is due to go into full effect by early 2020. The law allows transgender individuals over 14 years of age to legally change their name and gender in the civil registry, with no requirement for surgery or change in physical appearance. The passage of the law marks an important step forward for the trans community in Chile, but work remains to be done to guarantee the rights of married couples, who under the current law are required to divorce before accessing their right to a legal gender change.

The Bachelet administration’s bill to legalize same-sex marriage and allow same-sex couples to adopt children and pursue other reproductive options, submitted in August 2017, remains pending in the Senate. In September, the Chilean government removed language promoting equal marriage from its Human Rights Plan.

In August, Chile’s Senate agreed unanimously to consider an immigration reform bill to further regulate and systematize the immigration process to address the growing migrant population. Immigration laws have not been updated since 1975.

In August, the United Nations Refugee Agency estimated that around 400,000 Venezuelan migrants had entered Chile since 2016, making it the third highest recipient of Venezuelan refugees and migrants after Colombia and Peru. While Chile has made efforts to welcome Venezuelans, rules for obtaining visas, in practice, make it hard for some Venezuelans to take refuge. In June, Chile changed its rules to require Venezuelans entering on tourism grounds to obtain a visa before they arrive at the border. The tourist visa, valid for 90 days, is available at all Chilean consulates, but to obtain it, Venezuelans must present a passport issued after 2013 and pay US$50.

Chile also made available at all consulates a one-year “democratic responsibility visa”; the visa previously had been available only in Caracas. While increased access to the democratic responsibility visa may help some Venezuelans, it still carries a cost of US$30 and requires some form of valid documentation. Obtaining either visa may prove an insurmountable obstacle for the thousands fleeing without money or proper identification documents.

The Piñera administration has taken several concrete steps to overhaul the historically flawed National Service for Minors (SENAME), including passing a law to double government subsidies for 200 residences that house and care for foster children, establishing the first specialized residence to care for children with psychosocial disabilities, and taking steps to move children out of traditional SENAME centers and into residences with increased personalized care and resources. SENAME had been the subject of scrutiny for several years due to reports of abuse, ill-treatment, and death in its centers.

In July, the Piñera administration passed a law that removes the statute of limitations from sex crimes against children, following an increase in allegations of abuse by members of the Catholic Church. At time of writing, Chilean prosecutors were investigating more than 200 such cases.

A report released in April by the National Human Rights Institute (INDH) showed that 19 of the 40 state-run prisons in Chile were above capacity in 2016 and 2017, 24 lacked sufficient access to bathrooms and drinking water, and many had problems with sanitation, mold, pests, air circulation, and heating. Furthermore, 50 percent of men and 35 percent of women did not have access to individual beds. The INDH has filed dozens of lawsuits on behalf of inmates living in undignified and unhealthy conditions.

As a member of the United Nations Human Rights Council (HRC), Chile supported UN efforts in 2019 to scrutinize human rights violations in Nicaragua, Syria, Sri Lanka, Myanmar, North Korea, South Sudan, Belarus, Eritrea, Iran, Ukraine, and the Occupied Palestinian Territory. Yet in July it abstained in a resolution putting a spotlight on abuses in Philippines.

Chile has served since 2018 as the co-chair of the Organization of American States (OAS) Permanent Council Working Group on Nicaragua. In August, Chile supported a resolution to appoint a commission to monitor Nicaragua’s ongoing human rights crisis and compliance with the Inter-American Democratic Charter.

Chile has also supported resolutions before both the UN and the OAS condemning abuses in Venezuela.