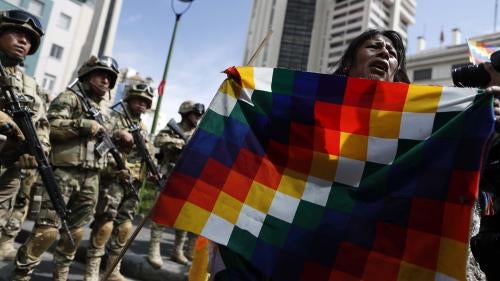 Bolivian President Evo Morales resigned on November 10 following massive social protests, an Organization of American States (OAS)  report detailing “clear manipulation” of the voting system during the October presidential election, and a request from the Armed Forces chief that he step down.

On November 13, Jeanine Áñez, second vice president of the Senate and a political opponent of Morales, took office as interim president in a highly controversial move that the Constitutional Court endorsed.

The Morales administration created a hostile environment for human rights defenders and promoted judicial changes that pose a serious threat to the rule of law in the country. After taking office, President Áñez announced and adopted some alarming measures that run counter to fundamental human rights standards, including a decree that would have shielded military personnel from accountability for abuses during crowd-control operations, which has since been repealed.

Violence against women, due process rights of detainees, child labor, and impunity for human rights violations are also major concerns.

In October, President Evo Morales ran for a fourth term. A majority of the Bolivian people had backed term limits in a 2016 national referendum, but Morales was allowed to run by the Constitutional Court in a 2017 ruling.

Massive protests broke after the election, which many Bolivians saw as unfair and fraudulent.

On October 25, the Supreme Electoral Tribunal (TSE) indicated that Morales won the presidency. But on November 10, the OAS presented a report detailing a “clear manipulation” of the voting system.

After the OAS report, Morales said the country would hold new elections and replace all TSE members. Later that day, the national military chief, Gen. Williams Kalima, asked Morales to resign. Morales resigned that day, saying he was being ousted in a coup. He traveled to Mexico the following day, after the Mexican government granted him asylum.

As of November 17, 23 people had died and over 700 had been injured in the context of protests since the October 20 elections, according to the Inter-American Commission on Human Rights (IACHR).

On November 15, 9 people died and 122 were wounded during a demonstration in Chapare province. The United Nations High Commissioner for Human Rights said that the deaths “appear to be the result of unnecessary or disproportionate use of force by the police and army.” Protesters, including Morales supporters, have also engaged in serious acts of violence.

On November 15, Áñez adopted a presidential decree deploying the military in “defense of society and public order.” The decree exempted members of the armed forces from criminal responsibility when they acted “in legitimate defense or state of necessity” and respected the “principles of legality, absolute necessity and proportionality” as defined under specific provisions of Bolivian law. The decree was inconsistent with international human rights standards and sent a dangerous message to soldiers in the streets that they would not be held accountable for abuses. It was repealed on November 28.

The Morales aministration sought to reform the Bolivian justice system, which has been plagued, for years, by corruption, delays, and political interference. But some initiatives pose a serious risk to judicial independence.

In 2017, the Magistrate’s Council ruled that all judges appointed before enactment of the 2009 constitution were to be considered transitory and could be summarily removed. The council has since summarily dismissed roughly 100 judges, without providing reasons for the dismissals nor opportunity to challenge them.

In December 2017, by popular election, voters elected high court judges and members of the Magistrate’s Council from closed lists created by the Plurinational Assembly, where the party of President Morales, Movement towards Socialism (MAS), holds a majority.

In 2018, the Magistrate’s Council adopted a resolution granting itself broad powers to transfer judges to other cities or court circuits.

In August 2019, an opposition congresswoman released audio recordings strongly suggesting that high-level judges and members of the Magistrate’s Council had exercised improper influence in the appointment of low-level judges.

Bolivia has prosecuted only a few of the officials responsible for human rights violations committed under authoritarian governments from 1964 through 1982, partly because the armed forces have at times refused to share information with judicial authorities about the fate of people killed or forcibly disappeared.

A “Truth Commission” that the government established in August 2017 to conduct non-judicial investigations of grave human rights abuses during that period is intended to provide information to prosecutors and judges to convict those responsible. The findings had yet to be published at time of writing. The Armed Forces have made limited progress in declassifying military files and releasing information about victims of enforced disappearance.

Around 66 percent of all Bolivians in detention have not been convicted of a crime. Extended pretrial detention and trial delays overcrowd prisons and lead to poor and inhumane conditions. By mid-2019, more than 19,000 inmates were packed into prisons built to hold a maximum of around 5,000.

In July 2018, the UN Subcommittee on Prevention of Torture said that prison officials’ “delegation of authority” to inmates, a “system of inmate self-government,” and “corruption” had heightened the vulnerability of inmates to “systemic forms” of exploitation, torture, and other ill-treatment. In March 2019, eight police officers were charged with the rape, earlier in the year, of a 21-year-old Brazilian inmate at the Rurrenabaque prison in the Department of Beni, northeast of La Paz.

In May 2019, the Legislative Assembly passed a law restricting pretrial detention of men and women responsible for the care of children. At time of writing, an implementation plan and special budget to implement the law had yet to be approved.

The Attorney General’s Office has repeatedly used a 2010 anti-corruption law to charge suspects with crimes alleged to have been committed before the law was enacted, violating the well-established the international principle of non-retroactive application of criminal law.

In 2018, the Legislative Assembly approved a government-sponsored amnesty law for former presidents Jorge Quiroga and Carlos Mesa. They had been charged with “anti-economic conduct”—a crime included in the 2010 law anti-corruption law–for acts committed in the early 2000s. The amnesty law requires that Quiroga and Mesa “request” the application of the amnesty. At time of writing they had not requested it, arguing that they are not guilty, and the cases against them remained pending.

A law and decree that President Morales signed in 2013 grants the government broad powers to dissolve civil society organizations. Under the decree, any government office may ask the Ministry of Autonomy to revoke the permit of a nongovernmental organization (NGO) if it performs activities other than those listed in its bylaws, or if its legal representative is convicted for crimes that “undermine security or public order.”

The decree also allows the Legislative Assembly to request revocation of an NGO’s permit in cases of “necessity or public interest.” These measures give the government broad powers to shut down independent civil society groups.

Morales administration officials accused human rights groups of engaging in an international conspiracy against the government, without presenting evidence to support their claims.

On November 10, a group of men set fire to the home of Waldo Albarracín, a university dean and human rights defender. Albarracín blamed Morales supporters.

While public debate is robust, the Morales administration periodically lashed out at journalists, accusing them, without presenting evidence, of publishing lies and politically motivated distortions. In May 2018, then President Morales tweeted that “some media outlets” receive “instructions from Washington to lie, manipulate [the truth] and misinform [the public].” The Morales government also repeatedly accused the media of participating in an international conspiracy against Bolivia and the president

In the context of the post-electoral violent protests, several news outlets and journalists were attacked or threatened. At least four outlets had to temporarily cease broadcasting.

On November 14, the newly appointed communication minister under Añez, Roxana Lizárraga, said that the government will take “pertinent actions,” including “deportation,” against journalists who “commit sedition.”

Bolivia lacks transparent criteria for using government funds to purchase media advertisements—an important source of media revenue—and some media outlets have accused the Morales admnistration of discriminating against those who criticize government officials by withholding advertising from them.

Indigenous peoples’ right to free, prior, and informed consent (FPIC) regarding legislative or administrative measures that may affect them is not fully enshrined in Bolivian law. International standards call for FPIC through all stages of projects that affect indigenous peoples’ rights to land and natural resources, yet one current Bolivian mining law governing indigenous land concessions limits FPIC to the exploitation phase.

Women and girls in Bolivia remain at high risk of gender-based violence, despite a 2013 law that sets forth comprehensive measures to prevent and prosecute violence against women. The law created the crime of “femicide” (the killing of a woman in certain circumstances, including domestic violence) and called for the establishment of shelters for women, as well as special prosecutors and courts for gender-based crimes.

The Attorney General's Office reported 136 victims of femicide in 2018, and 82 between January and September 2019.

Under Bolivian law, abortion is not a crime when the pregnancy is due to rape or if the procedure is necessary to protect the life or health of a pregnant woman or girl. In 2017, the Plurinational Assembly passed a government-sponsored criminal reform that would have fully decriminalized abortion for girls and allowed a woman to end a pregnancy in a range of circumstances, including if her life or health is at risk; if the pregnancy is a result of rape; and if the fetus suffers from severe conditions not compatible with life outside the womb. But in response to protests, the assembly abrogated the bill in January 2018, before it took force.

In 2018, the Constitutional Court abrogated a provision of a 2014 law that had allowed children as young as 10 to work in activities deemed not “dangerous” or “unhealthy.” Later that year, the legislature passed a law raising the working age for children and adolescents to 14 years. According to the Ministry of Labor, approximately 390,000 children work in Bolivia, often in hazardous industries, such as construction, the sugar-cane harvest, and mining.

In 2016, the Plurinational Assembly passed a bill that allows people to revise the gender listed on their identification documents without prior judicial approval. However, in 2017, the Constitutional Court ruled that such a revision of gender did not grant the right to marry a person of the same biological sex. Same-sex couples are not allowed to marry or engage in civil unions. Bolivia’s 2009 constitution defines marriage as the union of a man and a woman.

In July, President Morales signed a decree abrogating a discriminatory rule that forbade homosexuals and bisexuals from becoming blood donors.

On November 14, UN Secretary-General Antonio Guterres appointed Jean Arnault as his personal envoy to “offer United Nations support in efforts to find a peaceful resolution to the crisis” in Bolivia.

On November 18, the IACHR requested the government’s authorization to carry out a mission to Bolivia to observe the human rights situation. The same day, the Office of the UN High Commissioner for Human Rights (OHCHR) said it would deploy a mission to the document the situation in the country.

In November, Bolivia was subject to its third UN Universal Periodic Review at the Human Rights Council.

The OHCHR mandate in Bolivia ended in December 2017, after the government did not renew the agreement for it to work in the country.