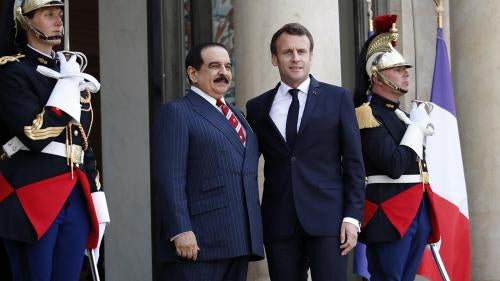 The human rights situation in Bahrain remained dire in 2019. Authorities have banned all independent media from operating in the country, dissolved all opposition groups, and cracked down on critical online posts. The government executed three people in July, including two prisoners who were convicted in a mass trial marred by serious due process violations and allegations of torture.

King Hamad al-Khalifa and the courts have reinstated the citizenship of 698 individuals who had their nationality revoked on apparently trumped-up terrorism or national security charges. However, almost 300 individuals remain stripped of their Bahraini nationality.

Bahrain continued to deny access to the United Nations special procedures, including the special rapporteur on torture.

On December 31, 2018, the Court of Cassation upheld a five-year sentence for Nabeel Rajab, head of the Bahrain Center for Human Rights, arising from his 2015 tweets alleging torture in Jaw Prison and criticizing Bahrain’s participation in the Saudi-led military campaign in Yemen. Rajab, who has already served two years on other charges related to peaceful expression, is set to remain behind bars until 2023. He appears to have at times been subjected to treatment that may amount to arbitrary punishment, and his health has deteriorated significantly. On August 2018, the UN Working Group on Arbitrary Detention called for Nabeel Rajab’s immediate release, saying his detention was not only arbitrary but also constituted “discrimination based on political or other opinion, as well as on his status as a human rights defender.”

On January 28, the Court of Cassation also upheld the life sentence against Shaikh Ali Salman, leader of Al-Wifaq, Bahrain’s largest but now-dissolved opposition political society. The government in November 2017 filed trumped up charges against Salman for allegedly spying for Qatar. A lower court acquitted him of these charges, but on November 4, 2018, an appeals court overturned that decision and sentenced him to life in prison.

Thirteen prominent dissidents have been serving lengthy prison terms since their arrest in 2011. They include human rights advocates Abdulhadi al-Khawaja and Abduljalil al-Singace, and Hassan Mushaima, leader of the unrecognized opposition group Al Haq, all three serving life terms.

In 2019 Bahrain widened its suppression of online and social media activity. On May 30, 2019, the Bahraini Interior Ministry declared that it will prosecute people who follow “inciting accounts” or share their posts on Twitter. The on-line platform in a June 6 post agreed  with activists that such statements “post a significant risk to free expression and journalism.”

No independent media operate in Bahrain. In 2017, the Information Affairs Ministry suspended Al Wasat, the country’s only independent newspaper. Independent and foreign journalists rarely have access to Bahrain, and Human Rights Watch and other rights groups are routinely denied access. International wire services, when they cover Bahrain, do so from Dubai or elsewhere outside the country.

On July 27, Bahrain executed three men, including two men, Ali al-Arab and Ahmad al-Malali, convicted of terrorism offenses. A court had sentenced them to death on January 31, 2018, in a mass trial marred by allegations of torture and serious due process violations. The Court of Cassation upheld their death sentences on May 6. Under Bahraini law, the king must ratify a death sentence before it can be carried out. He also has the power to commute it or grant a pardon.

Currently eight people in Bahraini prisons are at imminent risk of execution, having exhausted all legal remedies, according to the London-based Bahrain Institute for Rights and Democracy (BIRD).

Authorities in 2019, as in years past, failed to credibly investigate and prosecute officials and police officers who allegedly committed violations, including torture. Despite numerous complaints by detainees and their family members, the Interior Ministry’s Ombudsman Office and Special Investigations Unit failed to display independence from the government and did not hold prison guards and officers to account.

On August 15, prisoners in the Jaw Prison and Dry Dock Detention Center began a hunger strike to protest conditions in detention, including placement in “isolation” cells where prisoners are held with individuals with whom they do not share a common language, culture, or religion. Prisoners also demanded an end to anti-Shia religious persecution and abuse by prison guards, as well as removal of glass barriers during family visits.

The Interior Ministry’s Ombudsman  on August 23 claimed that the demands of the prisoners do not fall within the issues that the ombudsman is competent to consider.

On September 17, a Bahraini court rejected a motion filed by Nabeel Rajab’s legal team asking that he be granted a non-custodial sentence instead of the jail term he is currently serving, invoking a 2017 law that allows courts to convert jail terms into alternative sanctions. Rajab is currently detained with nine other prisoners convicted of prostitution offenses. Hajer Mansoor and Medina Ali, two female activists at the Isa Town Prison, also applied for non-custodial sentences, but authorities rejected their motions.

On the occasion of Eid al-Adha, on August 10, King Hamad issued a royal pardon for 105 detainees, including activist Najah Yusuf. Yusuf was imprisoned and subjected to physical abuse and sexual assault after she criticized the Formula One races in Bahrain on social media in April 2017.

Courts stripped 180 persons of their citizenship for alleged offenses that include “terrorism,” “national security,” and “offending the country,” between January and April, according to the London-based Bahrain Institute for Rights and Democracy (BIRD).

On April 20, the king reinstated the citizenship of 551 individuals who had their citizenship stripped through a court order. In July, the courts restored the nationality of another 147 individuals. However, almost 300 persons whose citizenship had been stripped in recent years remain without Bahraini nationality and in most cases stateless.

On June 27, Bahrain amended its citizenship revocation laws, restricting the power to strip nationality to the cabinet. Under the amendments, the king and the judiciary no longer have the power to unilaterally strip Bahrainis of their citizenship for national security or terrorism crimes. All known citizenship revocations since 2012 have been handed down by the courts, or by royal decree, or by order of the Interior Ministry.

The Court of Cassation upheld the three-year prison sentences against three relatives of prominent exiled activist Sayed Ahmed al-Wadaei on February 25. They were arrested in March 2017 and convicted in October 2017 on dubious terrorism charges that appear to have been filed as a reprisal for al-Wadaei’s human rights work. The judicial process was marred by due process violations and allegations of ill-treatment and coerced confessions.

Bahraini family laws discriminate against women in the right to divorce, inherit, and transmit Bahraini nationality to their children on an equal basis to men, and deprive their children of the right to obtain citizenship on an equal basis with children of Bahraini men. Article 353 of the penal code exempts perpetrators of rape from prosecution and punishment if they marry their victims. Bahrain’s parliament proposed a full repeal of that article in 2016, but the cabinet rejected the proposal. Article 334 of the penal code reduces the penalties for perpetrators of so-called honor crimes.

In December 2018, Bahrain amended its labor law to ban discrimination on the basis of sex, origin, language or creed, and sexual harassment in the workplace.

Adultery and sexual relations outside marriage are criminalized. There is no law to prohibit general discrimination on the grounds of gender identity or sexual orientation.

While domestic workers are included in the labor law, they are excluded from most of its protections, including those related to weekly rest days, a minimum wage, and limits on working hours. In 2017, Bahrain introduced a unified standard contract for domestic workers, which requires detailing the nature of the job, work and rest hours, and weekly days off. While this contract is important, it lacks the legal protection and enforcement mechanisms to ensure domestic workers have their rights respected.

Bahrain continued to participate in Yemen military operations as part of the Saudi Arabia-led coalition, which is responsible for serious laws of war violations. The coalition has failed to credibly investigate potential war crimes, and coalition members, including Bahrain, have provided insufficient or no information about their role in alleged unlawful attacks.

The US maintains a major naval base in Bahrain. During a meeting with King Hamad on January 11, US Secretary of State Mike Pompeo thanked Bahrain for its strategic partnership with the United States, including counterterrorism. There were no indications that Bahrain’s human rights record was part of their conversation.

On May 3, the State Department approved two major weapons sales to Bahrain for Patriot Missile Systems worth $2.5 billion and weapons to support F-16 fighter jets worth $750 million.

King Hamad met with French President Emmanuel Macron in Paris on April 30, during which Marcron urged Bahrain to establish “political dialogue that includes all components of Bahraini society,” according to the president’s office.  Bahrain’s foreign minister denied that Macron had raised this issue during the meeting.

On July 27, the European Union expressed concerns about the executions of Ali al-Arab and Ahmad al-Malali and urged Bahrain to introduce a moratorium on executions as a step towards abolition. It also criticized the Cassation Court’s life sentence against Shaikh Ali Salman, calling the verdict “a further step against dissenting voices.”

Bahrain has not responded to requests from UN human rights experts to visit. The government effectively cancelled the visit of the special rapporteur on torture in 2013, which it had earlier approved.