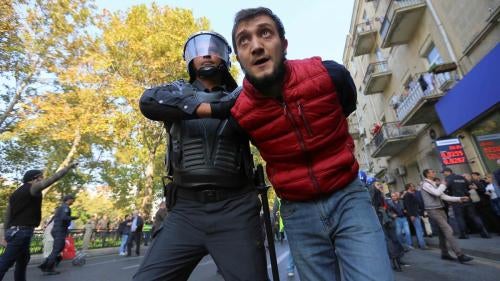 Other human rights problems persisted, including torture and ill-treatment in custody, violations of freedom of assembly, undue interference in the work of lawyers, and restrictions on media freedoms.

In March, President Ilham Aliyev pardoned over 50 imprisoned perceived critics, including journalists, bloggers, opposition political parties’ activists, and others. Their convictions remained in force, and some faced travel restrictions, while others left the country fearing further politically motivated persecution.

Among those released was Bayram Mammadov, a youth opposition movement activist. But two weeks later, police arrested him following a media interview in which he said he would continue his political activism. A court sentenced him to 30 days in jail on spurious disobedience charges. Police summoned several other pardoned activists for conversations, warning them not to engage in activities critical of the government, such as demonstrations and online criticism.

In February, Mammad Ibrahim, an advisor to the opposition Azerbaijan Popular Front Party (APFP), was released. Arrested in 2016, Ibrahim fully served both his sentence on bogus hooliganism charges and an additional five-month sentence, based on a new charge that authorities pressed two days before his originally scheduled release.

In October, ahead of an unsanctioned rally, APFP member Pasha Umudov was arrested and sent to pretrial detention on bogus drug charges. Authorities pressed bogus misdemeanor hooliganism, public swearing, and other charges against dozens of opposition activists and other critics. In August alone, courts sentenced at least six active APFP members to fines or jail terms ranging from 10 to 60 days.

Authorities lifted travel bans against several activists and journalists, but restrictions remained in place for others due to their verdicts or, in several cases, to their status as witnesses in investigations dating to 2014. APFP chairman Ali Karimli has been banned from foreign travel since 2006, when his passport expired. Authorities have since refused to reissue it, citing bogus pretexts.

At least 17 members of Muslim Unity, an unregistered, conservative Shiite movement, remained in prison on extremism and other charges, following a 2017 verdict flawed by credible torture allegations. In July, authorities released another member, Abulfaz Bunyadov on medical grounds due to injuries he sustained during his 2015 arrest.

Azerbaijan effectively imposes a blanket ban on protests in the central areas of Baku and instead offers demonstrators a remote location on the outskirts of the city to for rallies. In 2019, the number of people handed administrative fines or brief jail terms for supposedly violating the country’s restrictive regulations on public gatherings was several times higher than throughout 2018.

In January, about 40 people received jail terms of 10 to 30 days for demanding the release of the blogger Mehman Huseynov through sanctioned peaceful protests and social media activism.

In October, police violently broke up three unsanctioned, peaceful protests in central Baku, and arrested and beat protesters who demanded freedom for political prisoners and an end to economic injustice and violence against women. Courts sentenced dozens of protesters in pro forma hearings to fines and detentions. Police denied detainees access to lawyers of their choosing. At least 35 senior AFPF politicians received sentences of up to 60 days on bogus charges. Numerous peaceful protesters sustained injuries, including bruising, and fractures, from police beatings. While in police custody, AFPF leader Ali Karimli sustained bruises on his head, face, and neck due to police beatings. Police also beat Tofig Yabublu, another prominent opposition politician and former political prisoner and ordered him to publicly pledge to stop his political activism.

Police also made home visits to warn people who had indicated on social media that they would attend rallies. Days before one of the protests, police detained most of the protest organizers.

In 2019, the Azerbaijani Bar Association, which is seen as closely tied to the government, restored the licenses of three lawyers who work on cases involving political persecution. Their licenses had been suspended for one year following complaints filed by the prosecutor’s office. But pressure continued on several other lawyers.

In February, a court approved the disbarment of Yalchin Imanov, whom the Bar Association expelled in 2017 after he publicly reported about his client’s torture in prison.

Also in February, the Bar Association reprimanded Elchin Sadigov for advising his client, Yunis Safarov, about filing a torture allegation. Safarov is in custody and charged with the 2018 murder of the Ganja mayor. The reprimand followed a prosecutor’s office complaint denying the torture and alleging Sadigov unlawfully tried to persuade Safarov to make an allegation. The complaint referred to a statement Safarov signed in custody about alleged pressure by Sadigov and to a confidential conversation between the two.

All mainstream media remained under tight government control. Defamation is a criminal offense.

Journalist Seymur Hazi was released from prison in August after serving out his five-year sentence on a politically motivated hooliganism conviction.

In June, Polad Aslanov, editor of independent news websites Xeberman and Press-az, was jailed on treason charges, which he claimed were in retaliation for his criticism of public officials and his ongoing  investigation into alleged corruption in the Ministry of National Security. Aslanov’s lawyer said Aslanov faced government harassment in previous years in retaliation for his reporting.

In February and March, respectively, a court handed Mustafa Hajibeyli and Anar Mammadov, two journalists with small, independent news websites, five-and-a-half-year suspended sentences for their coverage of the 2018 assassination attempt on the Ganja mayor and subsequent nationwide electricity blackout. Hajibeyli edited  the pro-opposition Bastainfo.com news website, which remained blocked since July 2018. Mammadov is editor-in-chief of Criminal.az. Both journalists’ articles criticized the mayor’s brutal rule and faulted the authorities for failing to prevent the ensuing violence.

Both were convicted on trumped-up sedition, forgery, and abuse of office charges. They remained at liberty but under foreign travel bans.

Other journalists including Afgan Mukhtarli, Ziya Asadli, Araz Guliyev, and Elchin Ismayilli, who publicly criticized the authorities, remained behind bars on bogus charges.

In April, REAL TV, a private news station closely tied to the government, launched an intimidation campaign against Sevinj Osmangizi, who lives in exile and runs a popular YouTube news channel about Azerbaijan. In a series of broadcasts, REAL TV tried to blackmail her, including through illegally obtained photos and fabricated emails, into ceasing her broadcasts. It also broadcasted an illegally recorded conversation between Osmanqizi and another independent journalist.

On April 1, police detained around 14 people, gay men, and transgender women, claiming they engaged in illegal sex work. According to Nefes LGBT Azerbaijan Alliance, an independent group, in some cases the men were detained after being lured for dates through mobile apps. Police took at least some for unlawful, forced testing for HIV and other sexually transmitted diseases. Courts fined two for “hooliganism” and handed jail sentences of up to 15 days to another three for resisting police, then fined and released them upon appeal. No confirmed information is available regarding sanctions against the other nine.

Authorities typically dismiss complaints of torture and other ill-treatment in custody, and the practice continued with impunity.

In February, a court sentenced three senior APFP members, Saleh Rustamov, Agil Maharramov, and Babek Hasanov, to seven, four, and three years, respectively, on illegal entrepreneurship, drug, and other charges. The charges stem from allegations that Rustamov illegally used his company’s funds to support imprisoned party activists and party activities. Police arrested the men in May 2018. Authorities held Rustamov incommunicado for 17 days and denied him access to his lawyer for a month. During trial, the men testified they were tortured and pressured to confess. No effective investigations followed the allegations.

In March, law enforcement personnel repeatedly slapped and kicked Bayram Mammadov (see above), and held him for nearly 24 hours, handcuffed, legs tied, and lying on the floor. His lawyer said he had bruises. Authorities failed to conduct an effective investigation.

Also in March, 14 defendants convicted on mass rioting and other charges for the July 2018 unrest in Ganja testified in court that police had beat them repeatedly to elicit confessions and testimony. The authorities conducted a superficial investigation into the allegations before closing it. According to the defendants’ lawyers, authorities claimed that the wounds and injuries that staff at the pretrial facility documented had been sustained when the men were resisting arrest.

The March pardon prompted statements from the US administration and the European Union urging Baku to release others in prison on politically motivated charges.

The EU continued to negotiate a new partnership agreement with Azerbaijan to enhance political and economic ties. In April, following meetings with top Azerbaijani officials, then-EU High Representative Federica Mogherini said that she had raised concerns regarding “the limited space for civil society and human rights defenders in Azerbaijan.” The statement also said that the EU intends to make human rights an essential element of its cooperation with Azerbaijan.

Following his July trip to Baku and meeting with President Aliyev, then-European Council President Donald Tusk underlined the “essential importance” the EU “attach[es] to the respect for the rule of law, human rights and fundamental freedoms” in cooperation with Azerbaijan. Tusk also met with civil society activists to hear their concerns.

In January, the European Parliament adopted a resolution on the case of Mehman Huseynov and called for the immediate and unconditional release of all political prisoners.

In September, the rapporteur for the Parliamentary Assembly of the Council of Europe on political prisoners in Azerbaijan went to Baku. She met four prisoners, civil society representatives, and others. Her report was expected by the end of 2019.

In July, Council of Europe Human Rights Commissioner Dunja Mijatovic visited Baku, where she raised concerns about arbitrary arrest and misuse of criminal law against critics and highlighted the need to release “all persons who are in detention because of the views they expressed.” She also called on authorities to create better livelihood opportunities for internally displaced people.

The EU and the human rights commissioner of the Council of Europe (CoE), as well as the rapporteurs on Azerbaijan of the CoE’s parliamentary assembly all issued statements expressing concern about violent dispersals of the October protests and urging effective investigations and release of all detainees.