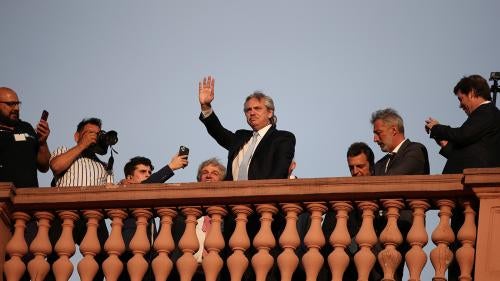 Longstanding human rights problems in Argentina include police abuse, poor prison conditions, and endemic violence against women. Restrictions on abortion and difficulty accessing reproductive services remain serious concerns, as are impunity for the 1994 bombing of the AMIA Jewish center in Buenos Aires and delays in appointing permanent judges.

In October, Alberto Fernández was elected president of Argentina. He took office in December.

Pardons and amnesty laws shielding former officials implicated in the dictatorship’s crimes were annulled by the Supreme Court and federal judges in the early 2000s. As of March 2019, the Attorney General’s Office reported 3,161 people charged, 901 convicted, and 142 acquitted. Of 611 cases alleging crimes against humanity, judges had issued rulings in 221.

As of September 2019, 130 people illegally taken from their parents as children during the dictatorship had been identified and many were reunited with their families.

The large number of victims, suspects, and cases makes it difficult for prosecutors and judges to bring those responsible to justice while respecting their due process rights. Argentine law allows judges to send inmates age 70 and older to serve their time under house arrest. The Attorney General’s Office reported in March that 650 pretrial detainees and convicted prisoners were under house arrest.

A 2018 United Nations report found that prisons and jails are so crowded that some pretrial detainees are being held in police stations. Prison guards have taken “disobedient” detainees to isolation cells without following established sanction procedures. Security forces have detained children and subjected them to abuse.

The National Penitentiary Office, tasked with supervising federal prisons and protecting detainees’ rights, reported 558 alleged cases of torture or ill-treatment in federal prisons in 2018 and 232 cases from January through June 2019.

Official statistics show that more than half of the 14,400 detainees in federal prisons have not been convicted of a crime but are awaiting trial.

Security forces occasionally employ excessive force. In December 2018, the Argentine Security Ministry approved a resolution regarding the use of firearms by members of federal security forces that grants federal agents overly broad discretion to use firearms.

In June, a federal court in Buenos Aires summoned Daniel Santoro, an investigative journalist from Clarin newspaper, to appear before the court regarding his alleged participation in a scheme to extort people by threatening them with negative news coverage. The court had requested and obtained “details of all calls received or made” on Santoro’s phone from January 2016 to April 2019, undermining his right to protect sources. In September, a judge ordered the destruction of the document containing Santoro’s phone records, alleging it violated his privacy, according to Clarin. The case remained pending at time of writing.

In April 2017, the Argentine government committed to reforming the criminal code to narrow the definition of “sedition,” but had yet to present a new definition at time of writing.

Upon taking office, former President Mauricio Macri adopted a “temporary” set of decrees to “regulate” media and create a “temporary” agency to implement new rules. When the Macri administration ended, the agency was still reporting to the executive branch, compromising its ability to act independently from government interests. In 2016, the government said it was drafting a communications law that it claimed would respect free speech. As of November 2019, though, no comprehensive media law had been adopted by Congress, and the “temporary” agency had issued rulings regulating media.

A 2016 law created a national agency to ensure public access to government information. The agency is also charged with protecting personal data. As of July, individuals had filed 6,785 information requests. Authorities responded to most requests within a month, but as of November, citizens had filed 524 appeals before the agency, in most cases after authorities failed to respond to the original requests.

Some provinces and municipalities still lack freedom of information laws, undermining transparency at those levels of government.

In March, the government asked the Judiciary Council to investigate Judge Alejo Ramos Padilla, arguing he had carried out an investigation in a “political and journalistic way” and had “failed to comply with his duties regarding impartiality and secrecy.” The judge had testified before a Congressional commission about an investigation into allegations that intelligence agents had carried out illegal operations. The bulk of the information cited by the judge had already been disclosed online through the official website of the judicial branch.

The delayed appointment of permanent judges by the Judiciary Council has led to temporary appointments of judges who lack security of tenure, which the Supreme Court ruled in 2015 undermines judicial independence. As of October, 460 judgeships remained vacant.

Twenty-four years after the 1994 bombing of the Argentine Israelite Mutual Association (AMIA) in Buenos Aires that killed 85 people and injured more than 300, allegedly at the hands of Iranian suspects, no one has been convicted of the crime. In March 2018, an appeals court upheld a decision ordering the pretrial detention of former President Cristina Fernández de Kirchner for allegedly participating in a conspiracy with Iranian officials to undermine investigation of the bombing. It has not been implemented because she had parliamentary immunity as a senator, and is currently Argentina’s vice president.

Alberto Nisman, a prosecutor in charge of investigating the bombing, was found dead in his home in January 2015 with a single gunshot wound to the head and a pistol matching the wound beside him. In June 2018, an appeals court held Nisman’s death appeared to be a murder.

In February, a court acquitted former President Carlos Menem of alleged interference in the initial investigation into the bombing, but convicted a former head of intelligence and a judge of interfering. An appeal of the acquittal was pending in September 2019.

Indigenous people in Argentina generally face obstacles in accessing justice, land, education, health care, and basic services. Argentina continues to fail at implementing existing laws to protect indigenous peoples’ right to free, prior, and informed consent to government decisions that may affect their rights—a right provided for in international law.

In November 2017, Congress approved a law extending the deadline for completing a survey of indigenous lands to 2021. The survey is being conducted, but slowly.

Abortion is illegal in Argentina, except in cases of rape or when the life or health of the woman is at risk. But even in such cases, women and girls are sometimes subject to criminal prosecution for seeking abortions and have trouble accessing reproductive services, such as contraception and voluntary sterilization.

In May, a coalition of legislators, activists, and organizations under the umbrella “National Campaign for Legal and Free Abortion” presented to Congress their proposed bill  to decriminalize abortion completely during the first 14 weeks of pregnancy and, after that period, to allow women and girls to end pregnancies when they are the result of rape, when the life or health of the woman or girl is at risk, or when the fetus suffers from severe conditions not compatible with life outside the womb. Congress had approved a similar bill in 2018, but the Senate rejected it.

Despite a 2009 law setting forth comprehensive measures to prevent and punish violence against women, the unpunished killing of women remains a serious concern. The National Registry of Femicides, administered by the Supreme Court, reported 278 femicides—the murder of women based on their gender—but only 7 convictions, in 2018.

In April, Argentina, along with Brazil, Colombia, and Paraguay, signed a declaration proposed by Chile that called on the Inter-American human rights system bodies to take into consideration the “political, economic, and social realities” of each country in its decisions, which would undermine the agencies’ work.

In March, after an in-country visit, the UN Working Group of Experts on People of African Descent expressed concern regarding the “invisibility” of and “structural discrimination” against Afro-Argentines. The working group reported it had received information on cases of arbitrary arrest and abuse against street sellers of African origin.

During the Macri administration, Argentina was an active member of the Lima Group, a coalition of governments that monitors and speaks out about Venezuela’s poor human rights record and has called for the release of its political prisoners. In June, Argentina prohibited the entry to the country of more than 400 Venezuelan officials implicated in human rights abuses and corruption. The number of Venezuelans moving legally to Argentina has steadily increased since 2014, reaching more than 170,000 as of November.

During the 2019 presidential campaign, Fernández took a softer approach towards Venezuela, and suggested Argentina would withdraw from the Lima Group.