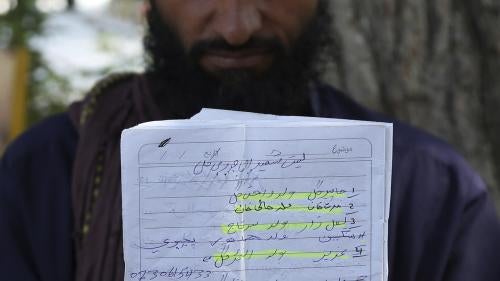 Military operations between Afghan and US government forces and the Taliban intensified in 2019, causing more than 8,000 civilian casualties between January 1 and September 30. Civilian deaths from Afghan government and US operations exceeded those caused by the Taliban for the first time during the first six months of 2019, largely due to a sharp increase in US airstrikes. The Taliban carried out hundreds of attacks on Afghan government and US military targets that killed and injured civilians.

US-Taliban negotiations on a settlement that could lead to a significant US troop withdrawal from Afghanistan were halted by President Donald Trump in September, leaving the start of peace talks between the Afghan government, the Taliban, and other Afghan groups in doubt. Throughout the year, Afghan women’s rights groups and other civil society activists called for broad representation of Afghans in the talks and preserving human rights protections, including constitutional guarantees on women’s equality, in any settlement.

On May 15 the new parliament was inaugurated, although credible allegations of fraud tainted the results. Taliban suicide and IED (improvised explosive devices) attacks on political rallies and election-related facilities before the September 28 presidential elections killed and injured hundreds of civilians country-wide.

The government made progress in reducing torture in some detention facilities, but failed to hold security forces members and prominent political figures accountable for abuses, including sexual assault. 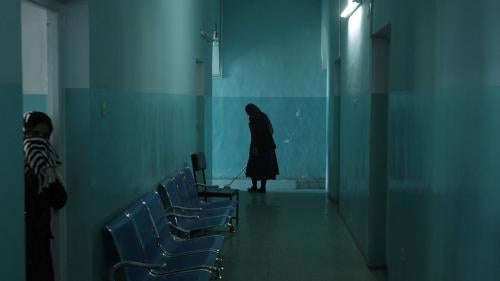 While 2019 saw a decrease in civilian casualties from large-scale suicide attacks in urban areas, indiscriminate attacks by insurgents still caused thousands of civilian deaths and injuries. The Islamic State of Khorasan Province (ISKP), the Afghan branch of the Islamic State, claimed responsibility for a suicide bombing at a Kabul wedding hall on August 17 that killed 63 and wounded over 180. On March 7, an ISKP mortar attack on an event in Kabul commemorating the 24th anniversary of the death of Abdul Ali Mazari, a Hazara political leader, killed 11 civilians and wounded 94.

The Taliban targeted civilians who worked with the Afghan government or foreign forces. On May 8, Taliban fighters attacked the Kabul headquarters of Counterpart International, a US nongovernmental organization (NGO) that implements USAID projects. Three civilians in the adjacent premises of Care International were killed. The Taliban killed and injured hundreds of civilians in attacks on Afghan government and foreign military facilities. A Taliban suicide attack on September 17 near the Afghan Defense Ministry in Kabul killed 22 civilians and wounded 38. A September 5 suicide bomb attack targeting NATO soldiers  killed at least 10 civilians.

The Taliban announced on August 6 that they would disrupt the elections by targeting rallies and other political gatherings. A suicide bombing at a campaign rally in Parwan on September 17 killed at least 20 civilians and injured more than 80.

US and Afghan air force operations caused over 1,000 civilian casualties in the first nine months of 2019, a 45 percent  increase over 2018. More than 100 children were killed in airstrikes between January and September. On September 23,  a US airstrike in the Musa Qala district of Helmand killed 40 civilians, including 5 children. A number of the victims were returning from a wedding when their vehicles were struck.

Afghan special forces supported by the CIA carried out summary executions and enforced disappearances during night raids. On September 5, a National Directorate of Security (NDS) unit known as “02,” which is supported by the CIA, killed four civilian brothers during an operation in Jalalabad city. The 02 unit allegedly killed 11 men, most of them members of one extended family, in a night raid in Zurmat district, Nangarhar, on August 11-12.  Human rights activists said local political rivalries may have led these CIA-supported forces to attack civilians.

Attacks on Healthcare Providers and Facilities

All sides in the war violated international humanitarian law protections for medical care. On September 20, a Taliban suicide attack on an NDS facility in Qalat, Zabul province, killed 20 people, mostly civilians, and severely damaged the city’s only hospital. The blast injured over 80 and destroyed several ambulances, impeding assistance.

Afghan strike forces conducted raids on medical facilities in which they assaulted medical staff and other civilians. On the night of July 8, special forces killed a lab worker, a guard, and a family caregiver at a clinic in Wardak province.

In April, the Taliban revoked security guarantees for the International Committee of the Red Cross (ICRC) operating in areas under its control. After the dispute was resolved  in September,  the ICRC resumed full operations. Also in April, the Taliban banned the World Health Organization’s polio vaccination programs, alleging “suspicious activities,” but ended the restrictions in September.

Violence and Sexual Harassment Against Women

Afghanistan’s attorney general indicted the Afghan Football Federation (AFF) president,  Keramudddin Karim, on multiple counts of rape, sexual assault, and harassment of female players dating to 2017. FIFA, football’s global governing body, issued a lifetime ban on Karim, and fined him 1 million Swiss francs (about US$1 million). However, as of October, Karim, a former governor, had not been arrested. In October, FIFA imposed a five-year ban on Sayed Aghazada, the former general secretary of the AFF, for failing to act on the allegations made by the women's national team players.

Abdul Samad Amiri, acting head of the AIHRC’s office in Ghor province, was abducted on September 3 together with a government employee. On September 5, the bodies of both men were found in the Jalrez district of Maidan Wardak province, an area in which the Taliban have established checkpoints to search for government employees.

In a statement on June 24, the Taliban threatened to target all Afghan TV channels, radio stations, and other media outlets that aired or published advertisements critical of their fighters.

On August 4, a magnetic IED blast targeted a bus carrying the employees of Khurshid TV, a private media outlet, killing the bus driver and a passerby, and wounding

four others, including media staff. On March 12, Nisar Ahmad Ahmadi, a reporter with Sabawoon TV in Lashkargah, Helmand, was injured when an IED attached to his car detonated.

The ISKP also carried out attacks on the media, and claimed responsibility for killing Sultan Mahmoud  Khairkhwah, a reporter with the privately owned, Khost-based Zhman TV and radio broadcaster. Khairkhwah was fatally shot in his car by two men on a passing motorcycle in Khost on March 15.

In its April 2019 report, the UN Assistance Mission to Afghanistan (UNAMA) documented a reduction in torture for conflict-related detainees. However, it found continuing high rates, particularly in the worst detention facilities, including Kandahar, or in facilities under the control of government special forces. The report found that 32 percent of conflict-related detainees had been subject to torture or ill-treatment in 2017-2018, down from 39 percent the previous two years.

UNAMA also documented summary executions, torture, and ill-treatment, including forced labor, in a Taliban prison, based on accounts from former detainees freed from Taliban detention in Uruzgan province.

The Taliban issued threats and carried out numerous attacks to deter voters from voting in the September 28 presidential elections, killing at least five people and injuring more than 75. The government closed one-third of all polling stations on election day, claiming the districts were too insecure. Critics alleged some of the closed centers were in opposition strongholds.

A bomb blast inside a mosque that was being used as a polling center in Kandahar injured at least 16 voters, election officials and police officials.  An explosion near a polling center in Jalalabad killed one and wounded several. The Taliban carried out rocket attacks on polling centers in Kunduz, Takhar and Wardak, and other provinces.

A US negotiating team led by Ambassador Zalmay Khalilzad met with Taliban leaders in Doha in nine sessions from January through August; the Afghan government was excluded. The two parties discussed terms for a US troop withdrawal based on Taliban pledges not to allow any opposition armed group to carry out attacks on the US from Afghanistan, among other things. The negotiators reportedly reached agreement on those two issues and on the timing of the first talks between the Afghan government, the Taliban, and other Afghan groups on the future of Afghanistan’s political system and constitution, including possible guarantees on human rights and women’s equality. President Trump called off US negotiations on September 7, leaving further peace talks in limbo.

US military operations intensified parallel to the talks. The commander of US forces in Afghanistan, Gen. Austin Scott Miller, said the US was targeting Taliban leaders “to limit their willingness to gather and plan attacks” and “set the conditions for a political settlement.” US airstrikes in Afghanistan reached record levels, with over 8,000 bombs and missiles dropped on Afghanistan between January and September.

A week before presidential elections on September 28, the US announced it was withdrawing $100 million earmarked for an Afghan energy project and would withhold another $60 million in planned assistance because of alleged corruption in the Ghani administration.

Khalilzad’s shuttle diplomacy on the peace process included meetings in Pakistan, India and China. Following an April 25 meeting in Moscow of their envoys to Afghanistan, the United States, Russia, and China released a tripartite statement in support of “an inclusive Afghan-led, Afghan-owned peace process.”

In February, Russia facilitated a meeting in Moscow between Taliban officials and a delegation of Afghan political leaders, including two Afghan women parliamentarians, but no officials from the Ghani administration. It was the first meeting between senior Afghan political figures and the Taliban since 2001. In May, the same Afghan delegation participated in a second round of the so-called Moscow Process talks with Taliban officials.

In July,  Germany and Qatar facilitated a meeting between Taliban officials and Afghan political and civil society leaders, including several women, in Doha; the talks included Afghan government officials attending in their personal capacity to discuss future talks on a peace settlement. The European Union called the talks “an important step” toward a peace process in which “rights are upheld and vulnerable groups protected.”

On April 13, the World Bank held a meeting of international donors in Washington to discuss a draft economic plan for post-settlement Afghanistan. Officials of Afghanistan’s donor countries and international agencies met in London on September 19 to discuss humanitarian assistance needs.

The European Union provided funding to the Afghan media for coverage of the September elections, noting that their role was “indispensable” for accountability and inclusivity and “preservation of human rights in Afghanistan.”

Australian Federal Police investigators travelled to Afghanistan to investigate war crimes allegedly committed by Australian special forces who served in Uruzgan province in 2006-2013. The alleged crimes include summary executions and abuses against Afghan civilians. Reports from Afghanistan’s human rights commission shared with the Australian Broadcasting Corporation support allegations that Australian special forces unlawfully killed a farmer and his child in Uruzgan.  Parallel to the AFP’s investigation, since 2016 the inspector-general of the Australian Defence Force has been conducting an inquiry into violations of the laws of war in Afghanistan.

In April, a three-judge panel of International Criminal Court (ICC) judges unanimously rejected ICC Prosecutor Fatou Bensouda’s request to open an investigation into possible war crimes and crimes against humanity during Afghanistan’s armed conflict. The judges said that “changes within the relevant political landscape” in Afghanistan and in “key states” would prove challenging in an investigation, an apparent nod to negotiations in Afghanistan and the Trump administration’s criticisms of the ICC, reflecting the possibility that US nationals could be indicted. The prosecutor has appealed the decision; at time of writing, the Appeals Chamber had not yet ruled on the merits of her appeal.