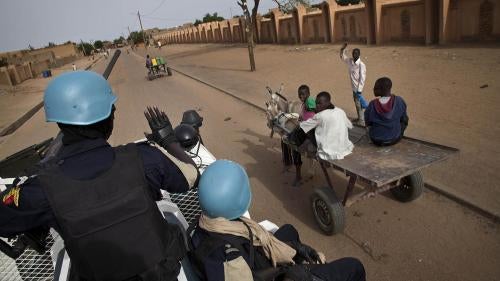 The human rights climate in Mali worsened as a result of a significant increase in violence and a marked deterioration in security, notwithstanding the June signing of a peace agreement envisioned to end the military and political crisis in the north. Attacks and violence progressively spread from the north into several southern regions and the capital, Bamako.

Throughout the year there were frequent incidents of banditry and rampant criminality; clashes between armed groups; and deadly attacks by armed Islamist groups on United Nations peacekeepers, Malian government forces, and to a lesser extent, civilians. The violence severely undermined the delivery of humanitarian aid. Government forces responded to the attacks with military operations that on several occasions resulted in arbitrary arrests, executions, torture, and other mistreatment.

Rule of law institutions countrywide were weak, in part due to unprofessional practices, such as the solicitation of bribes, and inadequate budgetary allocations for the criminal justice system. Corruption, endemic at all levels of government, further impeded Malians’ access to basic health care and education. There was little progress in security sector and justice reform or in addressing development challenges, such as the delivery of basic healthcare and education.

Concerns about the deteriorating security situation and the movement south of armed groups allegedly linked to Al Qaeda generated sustained diplomatic interest in Mali. The French government played a key role in military matters, the European Union (EU) on training and security sector reform, and the UN, through the Multidimensional Integrated Stabilization Mission in Mali (MINUSMA), on rule of law and political stability. However, these actors were largely reluctant to publicly call for investigations into past and ongoing crimes.

Throughout 2015, armed groups linked to Al-Qaeda, along with opposing ethnic Tuareg and Arab groups, engaged in numerous clashes, attacks on Malian soldiers and neutral peacekeepers, and to a lesser extent, on aid workers and other civilians. Many civilians were wounded or killed either in these attacks or by landmines and improvised explosive devices on major roads. Groups arbitrarily detained and often mistreated combatants from opposing sides.

The attacks by Islamist armed groups increased in the north and spread into central and southern Mali. Attacks occurred in Mopti, Segou, Sikasso, and Koulikoro regions as well as Bamako, where Islamist assailants killed five in a March attack on a nightclub, and at least 18, including many foreigners, during a November attack on an upscale hotel. An attack in August on a hotel in the army garrison town of Sevare, in central Mali, killed five civilians including four UN contractors. These groups executed at least 13 civilians accused of being informants for the government, the majority in central Mali.

In 2015, there were at least 30 attacks by armed men on humanitarian agencies, hampering their efforts to deliver aid. In March, a driver with the International Committee of the Red Cross was killed when their clearly marked truck was ambushed by an Islamist armed group.

At least 10 UN peacekeepers were killed in 2015 after being deliberately targeted by Islamist armed groups, bringing the number to 42 killed since MINUSMA’s creation in 2013. Armed groups took responsibility for many of these attacks, including an attack in July that killed six peacekeepers from Burkina Faso.

Al-Qaeda in the Islamic Maghreb (AQIM) at time of writing, held two foreign hostages: one from Sweden, and a dual British and South African national. AQIM released a French hostage in December 2014, and French forces freed a Dutch hostage in a military operation in April 2015.

Government forces committed numerous violations against suspected supporters and members of Islamist armed groups. Violations included arbitrary detention, torture and other ill-treatment, and extrajudicial execution. The most frequent and serious abuse was meted out by army soldiers and members of the pro-government militia Groupe Autodéfense Touareg Imghad et Alliés (GATIA), largely targeting men from the Peuhl and Tuareg ethnic groups. In May, GATIA militiamen allegedly executed six Tuareg men including a humanitarian worker in the northern village of Tin Hamma.

The abuse usually stopped after detainees were handed over to government gendarmes, who increasingly fulfilled their mandated role as provost marshal. The military made little effort to investigate and hold to account soldiers or militiamen implicated in violations. Members of the security forces, notably the army, were also implicated in acts of extortion, bribe taking, and theft, mostly from detainees.

The government made little progress in holding to account those from all warring factions responsible for law-of-war violations committed during the 2012-2013 armed conflict. With few exceptions, judicial authorities failed to investigate over 100 complaints filed by victims and family members. Moreover, the 2012 torture and enforced disappearance of 21 elite “Red Berets,” which in 2013 and 2014 resulted in charges against some 25 soldiers, including former coup leader Gen. Amadou Haya Sanogo, had, at time of writing, failed to move past the investigations phase.

During 2015, the authorities freed at least 74 detainees, including several allegedly implicated in serious international crimes during the 2012-2013 armed conflict. The releases, characterized by the government as a “confidence-building measure” in the context of negotiations, were carried out without regard to whether the men might have been responsible for serious crimes. The peace accord lacked provisions to address impunity and the need for justice for serious crimes committed by all sides during the conflict.

On September 18, the International Criminal Court (ICC) issued its first arrest warrant in the context of its Mali investigation. On September 26, Ahmad Al Mahdi Al Faqi was surrendered to the ICC from Niger after being charged with the destruction of historical monuments, the first case of its kind before the ICC. In July 2012, Mali, a state party to the ICC, referred “the situation in Mali since January 2012” to the ICC prosecutor for investigation.

In 2014, President Ibrahim Boubacar Keïta established the Truth, Justice and Reconciliation Commission by executive order. The Commission will have a three year mandate, covering the period from 1960 to 2013. It is to consist of 15 members and seven working groups. It will function under the Ministry of National Reconciliation and Development of the North. In August, the government appointed Ousmane Oumarou Sidibé as Chair of the Commission; however, his appointment and the credibility of the body were limited due to the government’s failure to consult sufficiently with a wide variety of stakeholders on the Commission’s membership, mandate powers, and degree of independence.

During 2015, there was some progress in ensuring access to justice for residents of the northern Timbuktu, Gao, and Kidal regions, demonstrated by the continued rehabilitation of local courthouses and jails and the redeployment of prosecutors, judges, and judicial police who had fled during the armed conflict. Their ability to conduct investigations outside major towns was limited by the precarious security situation. Some judicial and corrections personnel fled their posts in central Mali after attacks by armed groups.

Neglect and mismanagement within the Malian judiciary countrywide led to striking deficiencies, including insufficient staffing and logistical constraints. These shortfalls hindered efforts to address impunity for perpetrators of all crimes, contributed to violations of the right to due process, and led to incidents of vigilante justice. For example, in March, two children suspected of planting an explosive device near a police station in Gao were beaten to death by a mob.

Due to the courts’ inability to adequately process cases, hundreds of detainees are held in extended pretrial detention in overcrowded jails and detention centers.

Armed groups in the north continued to recruit and use child soldiers, some as young as 12 years old. During 2015, some 15 schools in the north were at various times occupied by members of the armed groups, and, to a lesser extent, government forces. Several children suspected of supporting the armed groups were detained in the Bamako Central Prison, in contravention of a 2013 protocol stipulating that children were to be placed in a care center managed by the UN Children’s Rights and Emergency Relief Organization (UNICEF).

In June, the UN Security Council renewed the mandate of MINUSMA and authorized 12,680 peacekeepers, including 40 military observers. A UN inquiry into the January shooting of three men by UN policemen from Rwanda during a protest in Gao found they had used “unauthorized and excessive force.” The UN peacebuilding fund supported reconciliation and justice projects. The UN independent expert on the situation of human rights in Mali, Suliman Baldo, conducted two missions to Mali.

Algeria led peace talks, supported by members from the African Union, the Economic Community of West African States (ECOWAS), the European Union, the UN, and Organization of Islamic Cooperation, as well as regional governments.

The 3,000-strong regional French operation—known as Operation Barkhane—continued operations in Mali as well as in Mauritania, Burkina Faso, Niger, and Chad. The United States military provided logistical support to Barkhane.

The EU Training Mission in Mali continued to train soldiers, and in February established the EU Capacity Building Mission to train the police, gendarmerie, and National Guard.

MINUSMA, the UN Development Programme, the EU, the Netherlands, and Canada took the lead in programs to support the justice sector and address corruption. However, their lack of coordination undermined progress in improving the sector.