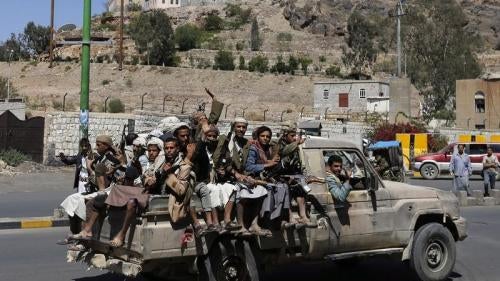 All sides committed laws of war violations in fighting that broke out repeatedly in different parts of the country in 2014, involving multiple actors including the Yemeni armed forces, Houthi rebels, Islamist fighters, and the Islamist armed group Al-Qaeda in the Arabian Peninsula (AQAP).

In September, following instances of security forces using excessive force against Houthi protesters, a four-day armed conflict rocked Sanaa as Houthi armed forces took the capital. The fighting in Sanaa ended on September 21 with the signing of a peace agreement, the resignation of the prime minister, and the formation of a new government in November.

By September 2014, 334,512 people across Yemen were officially registered as internally displaced due to fighting.

Yemen’s parliament voted in January 2012 to give former President Ali Abdullah Saleh and his aides immunity from prosecution. In September 2012, however, Saleh’s successor, President Abdrabuh Mansour Hadi, decreed the creation of an independent commission of inquiry to investigate alleged rights abuses committed during the 2011 uprising, and recommend measures to hold perpetrators accountable and afford redress to victims. By November 2014, Hadi had still to nominate the inquiry’s commissioners and no progress had been achieved.

The government failed to implement human rights reforms recommended at the 10-month-long national dialogue conference (NDC) that concluded in January 2014. The NDC made hundreds of human rights and other recommendations for legal reforms and relating to the drafting of a new constitution. However, the government took no significant steps to address the issue of accountability for past human rights crimes by establishing a national human rights institution or passing a transitional justice law, as the NDC had recommended.

In response to NDC recommendations, in June the minister of social affairs and labor and the minister of legal affairs jointly submitted a draft transitional justice law for cabinet review. In November, both it and another bill on looted funds had yet to be transmitted to parliament by the cabinet.

According to media reports, AQAP militants seized a hospital and two medical centers in Shabwa governorate in southern Yemen on April 20, following a series of government airstrikes that targeted AQAP training camps in the region. After forcibly evacuating the hospital’s medical staff, AQAP militants reportedly brought in a number of their own doctors to treat their wounded. In addition, according to Yemeni media, suspected AQAP militants opened fire on a minibus carrying staff members from a military hospital in Aden, southern Yemen, on June 15, killing at least six people and wounding at least nine others. Human Rights Watch was not able to independently verify these reports.

Women in Yemen face severe discrimination in law and in practice. Women cannot marry without the permission of their male guardian; they do not have equal rights to divorce, inheritance, or child custody; and a lack of legal protection leaves them exposed to domestic and sexual violence. The NDC produced many recommendations to bolster women’s and girls’ rights.

In response, in April, the minister of social affairs and labor, and the minister of legal affairs, submitted a draft Child Rights Law to the cabinet. The draft law sets the minimum age for marriage at 18, and provides criminal penalties of between two months and one year in prison and a fine of up to 400,000 Yemeni Riyal (US$1,860) for any authorized person who draws up a marriage contract knowing that at least one party is under 18. Any witnesses or signatories to the marriage contract, including the parents or other guardians, who know that at least one party is under 18 face a prison sentence of between one and three months and a fine of between 100,000 YER ($460) and 250,000 YER ($1,160).

The draft law also addresses other important rights for girls and women, including criminalizing the practice of female genital mutilation, with penalties of between one and three years in prison and a fine of up to 1,000,000 YER ($4,644) for those who carry out the cutting. The law remained pending in the cabinet at time of writing.

In May, Yemen signed an action plan with the United Nations to end and prevent the recruitment of children by the armed forces. The plan includes reforming national laws, issuing military orders prohibiting the recruitment and use of children, investigating allegations of recruitment, and providing for the reintegration of child soldiers into their communities. According to the United Nations Children’s Fund, UNICEF, the government has already taken concrete steps to implement the plan.

According to the Ministry of Education and Teaching, armed conflicts in Amran, Sanaa, and Shabwa led to the damage or destruction of at least 41 schools and the occupation by armed forces of at least 6 schools in 2014. In addition, 31 schools were being used to house internally displaced persons. In November alone, fighting in Ibb pushed authorities to temporarily close 169 schools serving 92,000 students, reopening them a week later. In Al Bayda, 11 schools in Rada' remained closed as of October 31, leaving 6,000 students without classes to attend.

The United States continued its drone campaign against alleged AQAP members. Independent research groups reported 23 US drone strikes in Yemen from January through November. The US remained unwilling to publish basic information on the attacks, including how many people the strikes killed or wounded, how many of those were civilians, and which, if any, strikes it found to be unlawful.

Previously, a US drone strike in December 2013 struck a wedding procession, killing 12 people and wounding at least 15 others. A Human Rights Watch investigation concluded that some, if not all, of the dead were civilians. In August 2014, evidence surfaced that the families of those killed in the wedding strike altogether received more than $1 million in compensation from the Yemeni government. Previously, compensation has only been provided by the Yemeni government when those killed were civilians.

Unlawful Use of Landmines

In November 2013, the government admitted, in response to reports by Human Rights Watch and others, that a “violation” of the Mine Ban Treaty had occurred in 2011 during the uprising that eventually ousted the Saleh government. Republican Guard forces loyal to the Saleh government laid thousands of antipersonnel mines in 2011 at Bani Jarmooz, northeast of Sanaa, causing numerous civilian casualties.

As a party to the Mine Ban Treaty, Yemen has committed to never use antipersonnel mines under any circumstances, and to prevent and suppress any prohibited activities. At least 15 governments expressed concern at the use of landmines in Yemen. In June at the Treaty’s Third Review Conference, Yemen stated that the Military Prosecutor’s Office had begun an investigation to identify those responsible.

In March 2014, Yemen provided the Mine Ban Treaty‘s president with an interim report that outlined plans for clearance, marking, risk education, and victim assistance in relation to the Bani Jarmooz mines. In October, Human Rights Watch was informed by locals that soldiers carried out mine clearance in one of the contaminated areas. The soldiers also erected warning signs in the area. However, in a neighboring contaminated area there has been no mine clearance or marking. Locals said that they had not received any risk education or victim assistance.

Since April 2013, Human Rights Watch has recorded at least seven new incidents of civilian casualties cause by landmines, including one death. Since late 2011, landmines in the area have killed at least two civilians and wounded twenty others.

In September 2014, the UN Office for the Coordination of Humanitarian Affairs reported that the Yemeni Mine Action Center suspended 30 percent of its high-priority survey and mine clearance activities due to a lack of funds.

Since 2006, and particularly since a weakening of government control in some areas following the 2011 uprising, human trafficking has thrived in Yemen. Traffickers hold African migrants in detention camps, torturing them to extort payment from their families, often with the complicity of local officials. Following the release of a report by Human Rights Watch documenting the trafficking industry, the government stated that it embarked on a number of raids against the smugglers.

It also requested the assistance of international organizations in addressing the rescued migrants’ immediate needs, and to facilitate the voluntary return of those wishing to return home. According to residents in the area where traffickers operate their detention camps, by July 2014, government forces had ceased their raids and the camps continued to function and held large numbers of refugees from Syria as well as African migrants.

In the first half of 2014, the Freedom Foundation, a Yemeni organization that monitors press freedom, recorded 148 attacks affecting members of the media, ranging from verbal harassment and threats, confiscations, looting, destruction of property, and politicized prosecutions, to unlawful detention, and one killing. In 47 percent of the cases reported, the abuses were attributed to the government and its agents. In most other cases, the government had not condemned the attacks, investigated them, or held those responsible to account. Nor did the government take broader measures to protect journalists.

do not publish data on its use or publicize executions, which are normally carried out by firing squad. In the past, Yemen has executed juvenile offenders—those sentenced for crimes committed when they were under age 18—but following international pressure, no juvenile offenders were sentenced to death or executed in 2014, as far as Human Rights Watch is aware.

At their seventh ministerial level meeting in February, the 39 countries and 8 international organizations that comprise the Friends of Yemen agreed a new structure to realign support for Yemen with the priorities established by the NDC. This saw the creation of working groups to support economic, political, and security reforms needed to complete Yemen’s democratic transition and agreement on the allocation of most of approximately $7.9 billion previously pledged funding assistance.

In October 2014, for the sixth consecutive year, Obama issued a full waiver allowing Yemen to receive military assistance, despite documented use of child soldiers by various forces, including government troops and progovernment militias.

On February 26, the UN Security Council adopted Resolution 2140, which established a sanctions regime that includes asset freezes and travel bans for those undermining the political transition, impeding the implementation of the final report of the NDC through violence or attacks on essential infrastructure, or having responsibility for international humanitarian law violations, and international human rights law violations or abuses in Yemen. In November, the Yemen Sanctions Committee imposed sanctions on former president Saleh and two Houthi commanders that include a global travel ban and asset freezes.

In September, the UN Human Rights Council adopted a resolution on Yemen that highlighted the need for investigations into past abuses, the passage of a transitional justice law, and the creation of an independent national human rights institution. In its report presented to the Human Rights Council and released in August 2014, the Office of the High Commissioner for Human Rights encouraged the international community to establish an independent, international mechanism to investigate violations of human rights that took place in 2011.