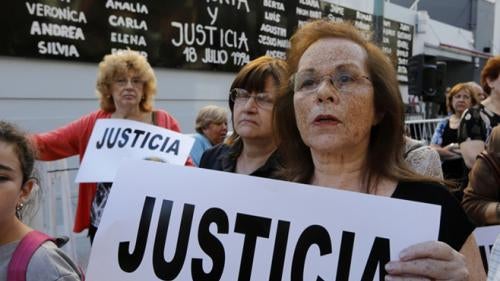 Argentina continues to make significant progress regarding LGBT rights and prosecuting officials for abuses committed during the country’s “Dirty War” (1976-1983), although trials have been subject to delays.

High fines and criminal prosecutions in specific cases have undermined the right to freely publish information of public interest. In 2011, the Ministry of Commerce imposed a fine of 500,000 pesos (approximately US$ 125,000) on 11 economists and consulting firms for publishing unofficial inflation statistics challenging the accuracy of official ones. One of the economists, Graciela Bevacqua, was subject to two fines, and was also criminally investigated at the request of the former secretary of commerce for allegedly “defrauding commerce and industry.” As of November 2014, the criminal case along with one of the fines against Bevacqua remained pending.

In May, journalist Juan Pablo Suárez was charged with “incitement of collective violence” with the intention of “terrorizing the population,”the first time prosecutors had invoked a 2011 law allowing enhanced penalties for certain “terrorism” crimes. Suárez, who works for an online news outlet, had published information on police strikes in Santiago del Estero province. The aggravated penalty was dropped following strong public backlash, but the case against Suárez continued at time of writing.

In 2011, journalist Juan Alberto Gaspari was fined 50,000 pesos (approximately $12,500) for criticizing a public official in Mendoza. According to Gaspari, the public official’s father, who was “disappeared” during Argentina’s military dictatorship, had not been the legitimate owner of land. As of November 2014, an appeal remained pending before the Supreme Court.

The absence of transparent criteria for using government funds at the federal level, and in some provinces to purchase media advertisements, creates a risk of discrimination against media outlets that criticize government officials. In two 2007 and 2011 rulings, the Supreme Court found that while media companies have no right to receive public advertising contracts, government officials may not apply discriminatory criteria when deciding where to place advertisements.

In 2009, Congress approved a law to regulate the broadcast media that includes provisions to increase plurality in the media. In 2013, the Supreme Court established clear parameters regarding how the law should be implemented to protect free expression. However, the federal authority in charge of implementing the law has failed to ensure a diverse range of perspectives in state-run media programming. In 2014, it unilaterally adopted a plan to force Argentina’s largest media conglomerate, the Clarin Group, to comply with the law’s limits on broadcasting outlets ownership, after rejecting the company’s proposal on how to do so.

At time of writing, no one has been convicted for the 1994 bombing of the Argentine Israelite Mutual Association (AMIA) in Buenos Aires that killed 85 people and injured over 300. From the investigation’s outset, judicial corruption and political obstruction hindered criminal investigations and prosecutions.

In January 2013, Argentina and Iran, which was suspected of ordering the attack, signed a memorandum of understanding (MOU) to create an international commission of jurists to review evidence and question Iranian suspects identified by Argentina. In May 2014, an Argentine federal court ruled the MOU unconstitutional. At time of writing, the ruling was on appeal and the MOU has not been implemented.

As of August 2014, 121 trials had been conducted for crimes against humanity originating from the dictatorship, resulting in 503 convictions. The Center of Legal and Social Studies (CELS) has reported that 42 people have been acquitted during the trials, and another 1,611 suspects are under investigation.

Given the large number of victims, suspects, and cases, prosecutors and judges face challenges in bringing those responsible to justice while also respecting due process rights of the accused. Other concerns include significant trial delays, the failure to capture two convicted military officers who escaped in July 2013, and the unresolved fate of Jorge Julio López, a former torture victim who disappeared in 2006 a day before he was due to attend the trial of one of his torturers.

Argentina has made significant progress in identifying children of the disappeared who were illegally appropriated during the dictatorship, and connecting them to their biological families. In July 2014, the National Bank of Genetic Data identified the grandson of Estela de Carlotto, the founder of Grandmothers of Plaza de Mayo. As of August, 115 grandchildren had been found. At time of writing, a legal challenge to a 2009 law that would limit collection of DNA samples to cases of the dictatorship was pending before the Supreme Court.

In December 2013, César Milani, head of the armed forces, was promoted to army chief of staff, despite being under criminal investigation for the 1976 disappearance of a soldier in Tucumán province, and the torture of a civilian in La Rioja province in 1977.

Police abuse remains a serious problem, despite a 2011 commitment by authorities in at least 19 provinces not to resort to excessive use of force when dealing with public protests. In May 2014, 22 people were injured after local police forces dispersed a workers’ demonstration in the province of Tucumán, using rubber bullets and police batons with excessive force, according to CELS. In June, police in the province of Chaco fired rubber bullets at demonstrators and beat and detained protesters, leaving more than 100 people injured.

Overcrowding, ill-treatment by prison guards, inadequate facilities, and inmate violence continue to be serious problems in prisons. According to the National Penitentiary Office (Procuración Penitenciaria de la Nación), an official body created by Congress, there were 88 deaths, including 41 violent ones, in federal prisons between January 2013 and October 2014. The office also documented 724 cases of torture or ill-treatment in federal prisons in 2013, and 520 in the first 10 months of 2014.

Existing laws require the government to perform a survey of land occupied by indigenous communities by November 2017, before which date authorities cannot lawfully evict communities. In June 2014, eight human rights organizations filed an amicus brief before the Supreme Court, arguing that a land survey in Formosa province had failed to guarantee the rights of members of the Potae Napocna Navogoh indigenous community.

Abortion is illegal in Argentina, with limited exceptions, and women and girls face numerous obstacles accessing reproductive health products and services, such as contraception, voluntary sterilization procedures, and abortion after rape or if the health or life of the woman is at risk (the few circumstances in which abortion is not punished). These barriers mean that women and girls may face unwanted or health or life-threatening pregnancies, and are subject to criminal prosecution for seeking abortions.

In June 2014, after seeking medical attention for abdominal pain, a woman in the province of Jujuy was arrested and charged with homicide based on suspicion that she had had an abortion. The woman, who later confessed under coercion that she had an abortion after being raped, remained incarcerated at time of writing, along with two co-workers who were also charged with homicide for their alleged participation in the procedure.

In a landmark ruling in March 2012, the Supreme Court determined that prior judicial authorization was unnecessary for abortion after rape and urged provincial governments to ensure access to legal abortions. As of March 2014, more than half of Argentina’s 23 provinces still had not adopted protocols that met the court's requirements, according to local groups.

In 2010, Argentina became the first Latin American country to legalize same-sex marriage. The Civil Marriage Law allows same-sex couples to enter into civil marriages and provides for equal rights and the legal protections of marriage afforded to opposite-sex couples including, among others, adoption rights and pension benefits. Since then, nearly 10,000 same-sex couples have married nationwide.

In April, the United Nations Committee on the Rights of Persons with Disabilities found that Argentine authorities had failed to ensure that a prisoner with disabilities had equal access to prison facilities and services, and underscored the state's obligation to take steps to rectify this situation and prevent similar violations in other cases.

Prompted by its debt crisis, Argentina pushed for an international resolution on sovereign debt restructuring, arguing that it was necessary for governments to fulfill certain rights obligations. In September, the UN General Assembly adopted one, establishing a multilateral framework to assist countries facing such restructuring. As a member of the UN Human Rights Council, Argentina supported UN action to put human rights violations in North Korea, Sri Lanka, Belarus, Iran, the Occupied Palestinian Territories, and Syria under close scrutiny. Argentina has been a leading supporter of international efforts to better protect schools through the process to develop and implement the Lucens Guidelines to Protect Schools and Universities from Military Use during Armed Conflict.

In September 2014, Argentina was one of the co-sponsors of an important UN Human Rights Council resolution on combating violence and discrimination based on sexual orientation and gender identity. The resolution called on the high commissioner for human rights to update a 2012 report on violence and discrimination, with a view to sharing best practices to overcome these abuses.