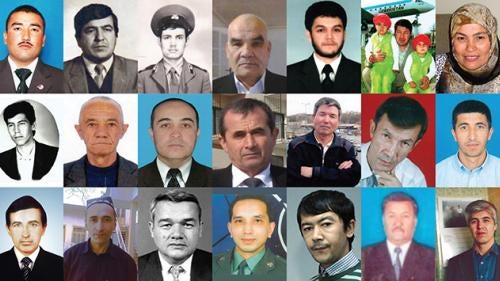 Uzbekistan’s atrocious rights record did not discernibly improve in 2014. Authoritarian President Islam Karimov, who entered his 25th year in power, continued to employ a widespread security apparatus to monitor and crack down on activities of real and perceived opponents.

Authorities repress all forms of freedom of expression and do not allow any organized political opposition, independent media, free trade unions, independent civil society organizations, or religious freedom. Those who attempt to assert rights, or act in ways deemed contrary to state interests, face arbitrary detention, lack of due process, and torture. Forced labor of adults and children continues.

A much-publicized feud between Gulnara Karimova, the president’s daughter, and her sister and mother, as well as with the country’s repressive National Security Services (SNB) that unfolded on Twitter and in the press revealed a level of infighting within the political elite in unprecedented fashion. Karimova’s accusations about corruption within the political elite and SNB officials’ use of torture brought to the fore many politically sensitive topics.  But there were no signs that the feud led to more space for free expression inside the country.

Imprisonment and Harassment of Critics

In January, police detained and fined independent photographer Umida Akhmedova, her son, and five others for holding a peaceful demonstration near the Ukrainian embassy in Tashkent in support of Ukraine’s “Euromaidan,” a pro-democracy movement. Akhmedova and her son were released one day later; at least 3 others were sentenced to 15 days’ administrative detention.

In March, after investigations that lacked due process, a Tashkent court sentenced Fahriddin Tillaev and Nuriddin Jumaniyazov, labor rights advocates, to more than eight years in prison on fabricated human trafficking charges.

The same month, authorities arbitrarily extended for an unspecified number of years the sentence of imprisoned rights activist Ganikhon Mamatkhanov, who had been serving a five-year sentence on politically motivated fraud charges.

In June, rights activist Abdurasul Khudoynazarov died just 26 days after his release from prison, having served more than eight years of a nine-year sentence on trumped up charges. Officials released him the same day that prison doctors diagnosed him with advanced liver cancer. He told rights groups that officials had consistently denied his requests for medical treatment since his imprisonment in 2006.

Also in June, a Tashkent court convicted journalist Said Abdurakhimov, who writes under the pseudonym “Sid Yanyshev” for FerganaNews, a site banned in Uzbekistan, on charges of “threaten[ing] public security,” among others. The court fined Abdurakhimov 100 times the minimum wage (approximately US$3,200) and confiscated his video camera.

In September, authorities introduced amendments that imposed new restrictions on bloggers, including a ban on “untrue posts and re-posts.” Dunja Mijatovic, the Organization for Security and Cooperation in Europe (OSCE) representative on freedom of the media, warned the measures would further undermine free expression in Uzbekistan.

Also in September, airport authorities prevented Feruza Khurramova, wife of exiled opposition activist Bahodir Choriev, and her son, both Uzbek citizens, from entering the country after they flew to Tashkent from the United States, where they reside. After being detained for several hours, authorities notified Khurramova that she and her son had been “stripped of their citizenship” and deported them to Turkey. Uzbek officials later informed other relatives of Choriev living outside Uzbekistan that they had also been stripped of their citizenship, citing an order of President Karimov.

In November 2013, the United Nations Committee against Torture stated that torture is “systematic,” “unpunished,” and “encouraged” by law enforcement officers in Uzbekistan’s police stations, prisons, and detention facilities run by the SNB. Methods include beating with batons and plastic bottles, hanging by wrists and ankles, rape, and sexual humiliation.

Although authorities introduced habeas corpus in 2008, there has been no perceptible reduction in the use of torture in pretrial custody or enhanced due process for detainees. Authorities routinely deny detainees and prisoners access to counsel, and the state-controlled bar association has disbarred lawyers that take on politically sensitive cases.

A lawyer for imprisoned activists Nuriddin Jumaniyazov and Fahriddin Tillaev told Human Rights Watch that, in January 2014, authorities stuck needles between Tillaev’s fingers and toes during an interrogation to force a false confession related to trumped-up charges.

In July, the wife of imprisoned rights activist Chuyan Mamatkulov told Human Rights Watch that on April 20, a prison captain named Sherali had repeatedly struck Mamatkulov on the head with a rubber truncheon in his office after Mamatkulov had asked to see a dentist.  He was then put in solitary confinement for 24 hours.

For nearly a decade, the Uzbek government has refused an independent investigation into the 2005 government massacre in Andijan. Authorities persecute anyone suspected of having witnessed the atrocities or who attempts to speak about them publicly.

In 2014, Human Rights Watch confirmed that authorities in 2012 arbitrarily extended by 8 years the 10-year prison sentence of Dilorom Abdukodirova, an eyewitness to the massacre. After fleeing to Kyrgyzstan in 2005, she settled in Australia. She was immediately arrested and imprisoned on her return in 2010, despite assurances she would not face prosecution.

In 2014, Human Rights Watch interviewed gynecologists from Uzbekistan who reported that the Ministry of Health orders some doctors to perform a certain number of forced sterilizations each month. Some women who have given birth to two or more children have been targeted for involuntary sterilization, especially in rural areas. Gynecologists confirmed that surgical sterilizations are performed without women’s informed consent and in unsafe medical facilities.

Authorities imprison religious believers who practice their faith outside state controls. In July, the Initiative Group of Independent Human Rights Defenders (IGIHRD) estimated that more than 12,000 persons are currently imprisoned on vague charges related to “extremism” or “anti-constitutional” activity, with several hundred convicted in the past 12 months. Authorities also harass and fine Christians who conduct religious activities for administrative offenses, such as illegal religious teaching.

In October, Forum 18 reported the death in custody at a women’s prison outside Tashkent of Nilufar Rahimjonova. Rahimjonova, 37, had been serving a 10-year sentence on “terrorism” charges—apparent retaliation for her links to her father, theologian Domullo Istaravshani and husband, both based in Iran and critics of the Uzbek government. After her arrest in 2011, Rahimjonova was forced to give an incriminating TV interview against her family and was sentenced following a flawed trial and allegations of ill-treatment. She was not known to have suffered any chronic illnesses prior to her death on September 13, 2014, the cause of which remains unknown. Authorities ordered her brother to bury her body quickly without an autopsy. Human rights activists fear Rahimjonova may have died of torture.

Consensual sexual relations between men are criminalized with a maximum prison sentence of three years. Activists report that police use blackmail and extortion against gay men due to their sexual orientation, threatening to out or imprison them. LGBT community members face deep-rooted homophobia and discrimination.

State-organized forced labor of children and adults in the cotton sector remains widespread. Authorities force over two million adults and schoolchildren, mainly ages 15-17 but some even younger, to harvest cotton for up to two months each autumn.

Following international pressure, the government reduced the numbers of young children sent to harvest cotton in 2014, as it had done in 2013, but increased the use of older children and adults. The forced labor of adults disrupts the delivery of essential services nationwide, as authorities mobilize public sector workers—including doctors, nurses, and teachers—to fill quotas.

In February, the International Labour Organization (ILO) reported the findings of its mission to monitor child labor during the 2013 cotton harvest. While finding that the practice was not “systematic,” the report noted the use of child labor, and emphasized concerns about the use of forced labor, which it recommended the government take steps to eliminate. Uzbek civil society reported that the ILO mission did not undertake a comprehensive assessment of the harvest since it did not include forced adult labor or ensure Uzbek civil society’s participation, and was not independent because monitoring teams included Uzbek government representatives.

Uzbekistan’s record of cooperation with UN human rights mechanisms is arguably among the worst in the world. For the past 12 years, it has ignored requests for access by all 11 UN human rights experts, and has rejected virtually all recommendations that international bodies have made for human rights improvements.

The United States government resisted imposing any serious policy consequences for Uzbekistan’s dismal rights record, viewing Tashkent as a key ally along the Northern Distribution Network (NDN) that it is using to withdraw supplies from the war in Afghanistan.

In 2014, for the second year in a row, the State Department’s human trafficking report placed Uzbekistan in the lowest category—“Tier III”—based on Tashkent’s systematic use of forced labor. For the sixth consecutive year, the State Department also designated Uzbekistan as a “country of particular concern” due to its serial violations of religious freedom, but the White House waived the sanctions envisaged under both statutes citing national security grounds.

The European Union did not publicly express concern about Uzbekistan’s deteriorating record, nor did it follow through with any known consequences for Tashkent’s failure to meet the reform expectations that EU foreign ministers set out in 2010. President Karimov was invited for state visits to European capitals, including Riga and Prague, although the latter was canceled in February after an outcry by rights groups.

In 2014, the Asian Development Bank and World Bank approved investments in Uzbekistan’s irrigation sector, despite concerns raised by civil society activists that doing so before the Uzbek government has acted meaningfully to end forced labor and allow monitoring by independent civil society could support ongoing abuses during the cotton harvest.