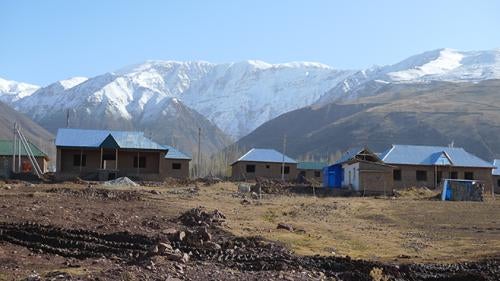 Tajikistan’s human rights record deteriorated in 2014, as authorities continued to crack down on freedom of expression, imprisoned opposition leaders, pressured a leading independent news agency, and arrested an academic researcher on trumped up espionage charges. Authorities’ use of torture to obtain confessions remained a serious concern. The government blocked various websites, considered introducing a new law that would require NGOs to register all sources of funding from foreign sources, subjected human rights groups to harassment, restricted media freedoms, and continued to enforce serious restrictions on religious practice, as it had in previous years.

In May, at least three people, including a police officer, were killed and at least seven, including three police officers, were injured during three-day clashes in Khorog, the capital of the autonomous republic of Gorno-Badakhshan in southeastern Tajikistan. The fatal clashes occurred during a police operation against suspected drug traffickers and protests by local residents upset with the police action. Some protesters used violence, attacking a security forces' building in Khorog using a grenade and firearms.

In a positive development, representatives of several nongovernmental organizations (NGOs) and Tajikistan’s human rights ombudsman created a detention monitoring group to investigate human rights issues, including the prevention and documention of torture and conditions in prisons and detention facilities. It was too early at time of writing to evaluate whether the group, which includes government representatives, will be a genuinely independent body.

In December 2013, a Dushanbe court sentenced businessman and former Minister of Industry Zaid Saidov to 26 years in prison on charges including embezzlement, corruption, polygamy, and rape, following a flawed investigation and trial during which Saidov was held incommunicado and denied access to counsel. Authorities arrested Saidov in April 2013, weeks after he announced plans to run for president and the creation of an opposition political party, New Tajikistan, to focus on economic reforms. During the investigation and trial, authorities harassed and threatened Saidov’s relatives, fellow party members, his legal team, and their families with prosecution.

In March, Tajikistan’s Agency for State Financial Control and Combating Corruption arrested one of Saidov’s lawyers, Fahriddin Zokirov, on fraud charges. Authorities released Zokirov under an amnesty on November 3.

In October, authorities responded to plans by the opposition party “Group 24” for a public demonstration in Dushanbe by blocking Internet and cell phone service throughout the country in the days leading up to the event. Authorities also denied visas to a number of representatives of international organizations throughout the end of the year, raising concerns that the government was seeking to block access to the country for independent observers.

In November, the Justice Ministry introduced a bill that, if adopted, would require NGOs to register grants from foreign donors in a state registry prior to being able to access them. The move raised concerns in Tajik civil society that the government planned to adopt measures to restrict the activities of independent NGOs similar to the “Foreign Agents” law adopted in Russia and currently under consideration in Kyrgyzstan.

Tajikistan’s Rogun Dam and Hydropower Plant stand to displace over 42,000 people before they become operational. Since 2009, the government has resettled 1,500 families to other regions around Tajikistan. Despite government commitments to comply with international standards on resettlement that protect the rights of those displaced, it has not provided the necessary compensation to displaced families to replace their homes or restore their livelihoods. Many families have suffered serious disruptions in access to housing, food, water, and education.

Torture is often used to coerce confessions and police and investigators routinely deny detainees access to counsel in pretrial custody.

On January 19, 34-year-old Umedjon Tojiev, a member of the opposition Islamic Renaissance Party of Tajikistan, died in a prison hospital in Khujand in northern Tajikistan. His death followed serious injuries he sustained on November 2, 2013, after allegedly jumping from the third floor window of a police station in the northern city of Isfara. According to his lawyer and relatives, Tojiev only leapt as he had been subject to three days of torture by police, including electric shock, asphyxiation with a plastic bag, severe beatings, and sleep deprivation. Authorities had arrested him on suspicion of belonging to a banned Islamist organization.

The authorities opened an investigation following calls by Tajikistan’s NGO Coalition against Torture, but had yet to present any findings at time of writing. The coalition reported that authorities have undertaken investigations regarding at least three out of seven cases of suspicious deaths in custody over the past four years, but that none have produced meaningful results.

Authorities’ attempts to restrict media freedoms and access to critical or independent information, including on the Internet, and the intimidation or detention of journalists, NGO representatives, and academics in 2014 harmed freedom of expression.

In February, a court decision against Tajikistan’s leading independent news outlet, Asia Plus, hampered freedom of expression in the country. On May 30, 2013, the site’s editor Olga Tutubalina published an article, “Unintelligent about the Intelligentsia.” The piece criticized Tajikistan’s intellectuals, and voiced skepticism over public praise for President Emomali Rahmon by Bozor Sobir, a poet and former government critic, including his call to Tajikistan’s artists and intellectuals to “unite” around the president.

Three Tajik intellectuals not named in the article and five state-funded bodies sued Tutubalina, accusing her of attacking their “honor, dignity and reputation.” A Dushanbe court ordered Asia Plus and Tutubalina to publish a retraction and pay the plaintiffs approximately US$6,100 (30,000 somoni), a decision upheld on appeal in April. The average monthly salary in Tajikistan is approximately $200.

In June, State Committee for National Security officers arrested scholar and well-known blogger Alexander Sodiqov in Khorog during an interview he was conducting with a leader of the May anti-government protests. For several days, authorities refused to confirm he was in their custody. They later confirmed that they were holding him in a Dushanbe detention facility where he was detained for two months without charge on suspicion of espionage. Following a robust international campaign that included public statements by numerous academic associations in support of academic freedom, Tajik authorities allowed Sodiqov and his family to leave the country and resume his PhD studies abroad. Human Rights Watch received credible reports that Tajikistan’s security services intimated or harassed other foreign and Tajik scholars during 2014.

Despite 2012 amendments removing libel as an offense from the criminal code, Tajikistan retains criminal sanctions for “insulting the president” or any government officials, creating a chilling effect on freedom of speech.

Rights groups, religious communities, and international bodies continued to criticize the highly controversial Parental Responsibility law, passed in 2011, which stipulates that parents must prevent their children from participating in religious activity, except for state-sanctioned religious education, until they turn 18.

Under the pretext of combating extremism, Tajikistan continues to ban several peaceful minority Muslim groups. Some Christian minority denominations, such as Jehovah’s Witnesses, are similarly banned.

Although Tajikistan decriminalized same-sex sexual activity in 1998, LGBT (lesbian, gay, bisexual, and transgender) people are subjected to wide-ranging discrimination and homophobia. In 2014, the State Committee for Religious Affairs instructed imams across the country to preach against “nontraditional sexual relations.” Tajik NGOs continued to document cases of police violence against LGBT people. LGBT people are especially vulnerable to extortion, fearing that their sexual orientation could be revealed to their family or employers.

After a follow-up visit in February to assess implementation of his 2012 recommendations, UN Special Rapporteur on Torture Juan Méndez stated that the punishment for torture needs to be increased in accordance with the severity of the crime, and that amnesty for torture should be prohibited. Mendez also expressed concern that there had been only four prosecutions involving cases of torture since 2012, despite persistent allegations that it takes place in prison and other places of detention.

In June, the European Union held its annual human rights dialogue with Tajik authorities , in which it highlighted its concerns shortcomings in the 2013 presidential elections and restrictions in press freedom, including the blocking of websites.The EU delegation in Tajikistan also publicly criticized Alexander Sodiqov’s detention.

The United States Commission on International Religious Freedom recommended that Tajikistan be designated a “country of particular concern” for “systematic, ongoing, [and] egregious violations of religious freedom,” but the administration elected not to do so.

In June, while stating it has no plans to finance the Rogun Dam, the World Bank released an assessment, including about the impact of the project on those who have been or could be resettled as a result, but did not consider relevant international human rights instruments that should guide resettlement.