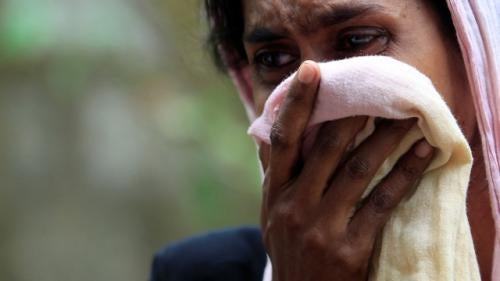 The Sri Lankan government has made little progress in providing accountability for wartime abuses. The government’s failure to comply with a March 2013 United Nations Human Rights Council resolution led to a new resolution in 2014. The resolution calls on the UN Office of the High Commissioner for Human Rights (OHCHR) to investigate serious violations of international human rights and humanitarian law and related crimes by both sides during Sri Lanka’s civil war, which ended in 2009.

The government has also continued its crackdown on critics. In March 2014, it detained two prominent human rights defenders who were looking into the arrest of an ethnic Tamil activist. Although the two were subsequently freed, the government arrested scores of other Tamils under the draconian Prevention of Terrorism Act. It also labelled 16 overseas Tamil organizations as financers of terrorism without providing evidence of unlawful activity by the groups.

A rally by the ultra-nationalist Buddhist Bodhu Bala Sena (BBS) escalated into violence in June, resulting in the death of four Muslims, injuries to at least 80 people, and the destruction of numerous Muslim homes and businesses.

The government’s treatment of Tamils forcibly returned to Sri Lanka after being denied asylum overseas continues to be a significant concern. In 2014, the government also started forcibly returning foreign nationals seeking asylum in Sri Lanka, many of them from communities at risk in Pakistan and Afghanistan.

The government is continuing its rehabilitation and reconstruction efforts in the war-affected northern areas. In 2014, a long-promised victim and witness protection bill was enacted into law.

The Mahinda Rajapaksa government resisted taking meaningful steps to investigate and prosecute alleged war crimes by government forces and the Liberation Tigers of Tamil Eelam (LTTE), as recommended by Human Rights Council resolutions in 2012 and 2013. Instead, the government continued its longtime practice of refusing to investigate or prosecute credible allegations of torture, including sexual violence, against suspected LTTE members or supporters in custody.

As a result, the Human Rights Council approved a stronger resolution in March 2014, calling on the OHCHR to undertake a “comprehensive investigation into alleged serious violations and abuses of human rights and related crimes.” The report is due in March 2015.

The resolution also calls upon OHCHR to investigate ongoing violations by the government, including the targeting of activists and attacks on Muslims. It reiterates past calls to the government to deliver justice and accountability in parallel with the OHCHR investigation.

In response, the Sri Lankan government has publicly stated that it will not cooperate with the international investigation and will deny visas to members of the investigative team seeking to enter the country. Members of the government also warned that Sri Lankan nationals who provide information to the UN investigation will be regarded as traitors. One cabinet member threatened that the government would “take appropriate action based on the evidence the detractors give.”

In July, the government announced the appointment of an international expert team to assist its own “disappearances” commission, and authorized the commission to investigate allegations of laws-of-war violations and enforced disappearances.

Crackdown on Civil Society and Critics

Arbitrary arrests of Sri Lankan activists who advocate for accountability continued in 2014. The government also widened its crackdown against independent media and human rights defenders.

In March, prominent human rights activists Ruki Fernando, of the Colombo-based INFORM, and Father Praveen Mahesan, a Catholic priest, were detained for three days and questioned. They had been seeking to ensure the welfare of 13-year-old Balendran Vithushaini, who had been ordered into probationary care following the arrest of her mother, Balendran Jeyakumari, an activist working on behalf of the forcibly disappeared. Human rights lawyers Namal Rajapakshe, Manjula Pathiraja, and Lakshan Dais received threats from unidentified men.

Media, particularly in the northern Tamil-majority areas, continue to face restrictions on reporting. In 2014, security forces forcibly shut workshops organized in the south to train journalists from the north, and ordered participants home.

While various development, resettlement, and reconstruction projects have been undertaken in former war zones in the north and east, government pledges to address the rights concerns of the ethnic Tamil population remain largely unfulfilled. The government has blocked simple gestures, such as allowing Tamil communities to hold commemorative services for their dead or sing the national anthem in Tamil.

The government passed an order freezing the assets and financial resources of entities ranging from the LTTE to nonviolent Tamil organizations around the world. The government provided no factual evidentiary basis for this order. The chief military spokesman said that legal action would be taken against anyone with links with the listed groups, potentially placing local activists and alleged group members visiting the country at risk of arbitrary detention.

Previous altercations in Aluthgama, about 60 kilometers south of Colombo, reached a violent apex in June. The incident was sparked by a minor traffic incident between Muslim youths and the driver of a van carrying a Buddhist monk. The BBS held a protest rally led by leader Galagodaaththe Gnanasara Thera the next day, purportedly to express concerns for the safety of Buddhists in the area. Soon after, mobs carrying poles and other objects went on a rampage, attacking Muslims. Even after the government ordered a curfew, Muslim homes and properties were targeted in nearby areas leaving at least four Muslims dead, 80 injured, and numerous homes and businesses destroyed in the town and surrounding areas.

Senior government officials, including President Rajapaksa, made public statements denouncing the violence. The government announced some arrests but had not filed charges against any suspects at time of writing.

Serious concerns remain about the forced return of Sri Lankans who seek asylum abroad. Many of the forced returns took place in the midst of intensified government security operations since March 2014, which saw scores of arrests and several deaths due to hazardous conditions at sea. Human Rights Watch and others have documented the authorities’ use of torture against people suspected of links to the LTTE, including those returned as failed asylum seekers from the United Kingdom and other countries.

In recent years and particularly since early 2014, the government also began forcibly returning individuals from other countries seeking asylum in Sri Lanka, including some persons registered with the United Nations High Commissioner for Refugees (UNHCR). Most of those forcibly returned are members of minority religions persecuted back home in Pakistan and Afghanistan. UNHCR has not been allowed access to detained asylum seekers prior to their deportation, some of whom it has previously recognized as refugees.

More than 1 million Sri Lankans are employed overseas, and many remain at risk of abuse at every stage of the migration cycle from recruitment and transit to employment, repatriation, and reintegration. Recruiters and unregulated subagents charge exorbitant fees leaving migrants indebted and often with inaccurate information about their promised employment overseas.

Over 90 percent of Sri Lanka migrants now work in the Middle East where they are subject to the restrictive kafala system that ties their visa to their employer. More than a third of Sri Lanka’s migrants are domestic workers, almost exclusively female. The government has taken some steps to protect their rights abroad, but many continue to face long working hours with little rest, delayed or unpaid wages, confinement in the workplace, and verbal, physical, and sexual abuse.

The United States and the United Kingdom called upon Sri Lanka to ensure accountability for war crimes.

India, an important regional partner, continued to press for reconciliation and protection of Tamils, but it abstained from the HRC vote. Japan, a key donor, also abstained and in other public statements commended Sri Lanka on post-wartime developments. The Chinese premiere visited Sri Lanka in an ongoing show of financial and political support for the government absent any human rights concerns.

Australia and Sri Lanka colluded to ensure that asylum seekers leaving Sri Lanka were either returned or else not allowed onto Australian territory. Australia sent back many asylum seekers to Sri Lanka after cursory interviews at sea; those found to have legitimate claims were processed in other countries. In an apparent bid to secure Sri Lanka’s assistance in stopping migrants and asylum seekers, Australia failed to call for better human rights protections and advocated against the HRC resolution.