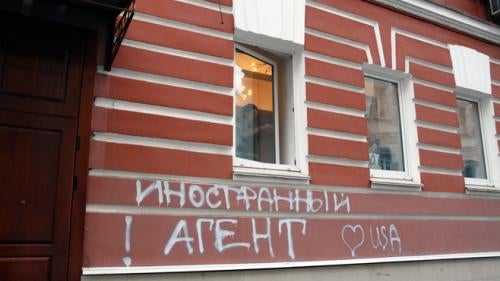 The Kremlin took another leap backward in 2014 by intensifying its crackdown on civil society, media, and the Internet, as it sought to control the narrative about developments in Ukraine, including Russia’s occupation of Crimea and its support to insurgents in eastern Ukraine.

Parliament adopted laws, and authorities engaged in practices, that increasingly isolated the country and inflamed a level of anti-Western hysteria unseen since the Soviet era.

In June, parliament amended Russia’s 2012 “Foreign Agent” law, which demonizes advocacy groups that accept foreign funding, by authorizing the Justice Ministry to register groups as foreign agents without their consent. By November, the ministry had forcibly registered 17 independent groups as such.

On December 17, the Supreme Court was due to review a Justice Ministry complaint against the Memorial umbrella organization requesting its closure under the pretext of technical breach of Russia’s nongovernmental organization (NGO) legislation.

In September, a court vacated a previous ruling against Golos, an election monitoring group, for failing to register as a “foreign agent” due to lack of evidence that the group accepted foreign funding. However, at time of writing Golos remained on the “foreign agents” registry.

In January 2014, TV Rain, one of Russia’s few independent television stations, lost access to cable and satellite television after it posted a viewers’ poll about whether the USSR should have surrendered Leningrad during World War II to save lives.

In March, the state agency for media oversight blocked three independent websites and an opposition leader’s blog under a new law authorizing the prosecutor general to request that the agency block websites without a court order. Also in March, the editor and executive director of Lenta.ru, an independent current affairs portal, were dismissed and replaced by pro-Kremlin media executives.

In April, the founder and CEO of VKontakte, the most popular Russian-language social network, announced he had left Russia because of persistent demands by the Federal Security Service to block opposition users and communities. In September, an Internet company controlled by an oligarch close to the Kremlin took full control of VKontakte by acquiring its remaining shares.

Several outspoken academics and public figures who work for government-funded cultural institutions were either fired or “rotated out” of their positionsfor example, historian Andrei Zubov, who lost his job after he publicy criticized Russia’s occupation of Crimea in a newspaper commentary.

Russian authorities fined four people during the year for violating the 2013 law banning distribution among children of positive information about “non-traditional sexual relationships,” which are known to signify lesbian, gay, bisexual, and transgender (LGBT) relationships.

Attacks on LGBT activists also persist. In April, a group of nationalists interrupted a Moscow screening of a documentary about LGBT discrimination. In September, groups of nationalists disrupted the opening night of an annual LGBT event in Saint Petersburg, QueerFest, throwing smoke bombs. Other QueerFest events were canceled due to threats and to venue operators breaking rental agreements.

Smear campaigns have targeted LGBT people working in the public education system. In at least six cases, employers did not renew their contracts, pressured them to resign, or simply fired them. Some LGBT people decided to leave Russia due to homophobia and fear of violations of their rights because of their sexual orientation.

Police interference in peaceful public gatherings continued in 2014. Authorities detained hundreds of peaceful protesters during the 2014 Winter Olympic Games and after the occupation of Crimea, in most cases arbitrarily and in some cases with unnecessary force. Between February 21 and March 4, police detained at least 1,300 peaceful protesters in Moscow alone. In March and September, two peaceful marches protesting Russia’s interference in Ukraine took place without incident in Moscow.

The government toughened penalties for unauthorized public gatherings. A new law increased to up to 15 years prison terms for “mass rioting,” the offense used to prosecute dozens of people who had protested at Moscow’s Bolotnaya Square on the eve of Putin’s 2012 inauguration.The law also introduced a new offense—“mass riots training”—  punishable by up to 10 years in prison. New amendments significantly increased fines for unauthorized public gatherings and introduced criminal punishment of up to three years in prison for repeat offenders.

In a March speech, Putin called independent groups and government critics “national traitors” and a “fifth column” working to destabilize the country.

Russia’s biggest political trial, against the Bolotnaya Square protestors, continued. In December 2013, four of the accused were released under a federal amnesty. Between February and August 2014, 13 were sentenced to up to four-and-a-half years in prison for, variously, mass rioting, violence against police, and organizing mass riots.

In June, a court released Mikhail Kosenko, a Bolotnaya protester sentenced in 2013 to forced psychiatric treatment.

In February, unknown perpetrators attempted to set fire to the home of Igor Sazhin, a prominent human rights defender in the Komi region. Authorities failed to investigate. Also in February, police in Voronezh arrested Roman Khabarov, a former police officer and human rights defender, on trumped-up charges of membership in an organized criminal group that operated a network of unlawful gambling spots in the region. His trial was set to begin in late 2014.

On April 2, a Krasnodar court convicted Mikhail Savva, a civic activist and academic, of fraud and gave him a suspended prison sentence and a fine of 70,000 rubles (US$1,945). Savva had spent over seven months in pretrial custody.

On June 9, five men were sentenced for participating in the killing of one of Russia’s most outspoken investigative journalists, Anna Politkovskaya, in 2006. Two received a life sentence; the others received prison terms ranging from 12 to 20 years. Others believed to have ordered the killing remained unpunished. The perpetrators of the 2009 killing of leading Chechen human rights defender Natalia Estemirova had still not been brought to justice at time of writing.

The confrontation between the Islamist insurgency and law enforcement agencies continued in Russia’s North Caucasus, particularly in Dagestan. According to Caucasian Knot, an independent online media portal, in the first nine months of 2014, 239 people were killed in the North Caucasus region, including 31 civilians, and 117 people were wounded, including 15 civilians. More than two-thirds of these casualties occurred in Dagestan.

Abduction-style detentions, torture, and enforced disappearances persisted in the North Caucasus, as did attacks against government critics. In August, Timur Kuashev, a freelance journalist and rights activist, was found dead near Nalchik, in Kabardino-Balkaria. The official investigation had not yielded tangible results at time of writing. Several Dagestani activists and lawyers told Human Rights Watch that they frequently received threats aimed at silencing them. In July, a court in Chechnya convicted Ruslan Kutaev, a prominent local activist, on trumped-up drug charges and sentenced him to four years’ imprisonment. The court disregarded torture allegations he made during his trial. On October 31, an appeals court decreased Kutaev’s prison sentence by three months. Two days before his arrest, Kutaev publicly criticized an order handed down by Chechnya’s leader, Ramzan Kadyrov.

Chechen authorities require women to wear headscarves in public places. In September, Kadyrov made a televised statement warning that as part of their fight against “non-traditional Islam,” authorities would detain women who wear “Wahabi”-style headscarves, covering the forehead and the chin.

Abuses Linked to Preparations for the 2014 Olympic Games

Authorities harassed and intimidated organizations, individuals, and journalists in Sochi in advance of the 2014 Winter Olympic Games. In February, an appeals court upheld a politically motivated prison sentence for Evgenii Vitishko, an environmental activist and critic of Russia’s Olympic preparations.

In January, the authorities announced that an inspection of more than 500 companies involved in Olympic construction exposed 277 million rubles (US$8.34 million) in unpaid wages to workers. However local activists report hundreds of migrant workers still did not receive full wages owed them.

The authorities failed to resettle or fairly compensate some families evicted for Olympic development or whose homes or property suffered damage from it.

2014 saw several positive developments in palliative care, including the introduction of clinical guidelines on pain treatment for children. The lack of access to quality pain treatment and palliative care remains a systemic problem. Access to morphine remains overly restricted for the vast majority of patients.

A doctor in Krasnoyarsk and another woman who had helped a man in final stages of cancer access pain medication were finally acquitted during a re-trial in October after they had initially been convicted and fined on charges of illegal drug trafficking of controlled substances.

In positive steps in 2014, the Ministry of Labor and Social Protection introduced amendments to legislation to expand mandatory accommodations for people with sensory and physical disabilities and to prohibit disability-based discrimination. Russia successfully hosted the Sochi 2014 Winter Paralympic Games. However, Sochi residents and tourists with disabilities continued to face barriers to using public services and facilities due to lack of accessibility.

Hundreds of thousands of adults and children with disabilities currently live in closed institutions. Approximately 45 percent of children in orphanages have disabilities. Many children with disabilities in orphanages face physical and psychological violence and neglect and are denied adequate healthcare, education, and play. Russia has committed to addressing the high rates of children in state institutions, but current policies lack concrete implementation and monitoring.

Moscow has made clear its political support for armed insurgents in eastern Ukraine and clearly exerts influence over them. There is also evidence that they provide material support to the insurgents in terms of weapons and training. Mounting evidence, including images of military manouvers and the capture of Russian soldiers in Ukraine, showed that Russian forces are taking part in hostilities there. Yet Russia has taken no public steps to rein in abuses by insurgents (see Ukraine chapter).

Russia’s interference in Ukraine largely contributed to the drastic deterioration of relations between Russia and its international partners, including the European Union and the United States, both of which imposed sanctions over Russia’s actions in Ukraine. Although the conflict in Ukraine eclipsed concerns about the crackdown in Russia, various actors sharpened their public criticism of Russia’s domestic record, decrying new, restrictive legislation and the hostile climate for civil society activists and human rights defenders.

In February 2014, the International Olympic Committee (IOC) pressed Russian authorities to investigate arrears wages owed to migrant workers involved in the preparations for the 2014 Sochi Winter Olympics, but it failed to condemn the 2013 anti-LGBT law, despite the Olympic Charter’s prohibition of discrimination.

In May, the Council of Europe’s human rights commissioner noted that pressure on independent journalists in Russia had increased.

The International Criminal Court prosecutor continued to monitor Russian and Georgian investigations into crimes committed during the 2008 Georgia-Russian conflict over South Ossetia.