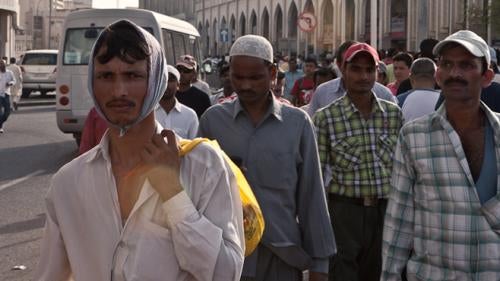 Qatar has experienced a low level of domestic dissent compared to its neighbors, but since its successful bid to host the 2022 FIFA World Cup, it has become a focus of international criticism of the mistreatment of low-paid migrant workers. Despite this, Qatar has failed to enact meaningful reforms to its labor system, which continues to facilitate the trafficking and forced labor of workers. Qatar has enjoyed a reputation as a center for media freedom in the region, but a new cybercrime law poses a serious threat to freedom of expression.

Qatar has a population of about 2 million, of whom only 10 percent are Qatari nationals. Low-paid migrant workers, mostly from countries in Asia and to a lesser extent Africa, continue to experience abuse and exploitation. Qatari authorities announced labor reforms in May 2014, in response to widespread condemnation of human rights abuses of construction workers as the country builds stadia and other facilities to host the 2022 World Cup.

However, the announced reforms will not adequately protect migrant workers from human trafficking, forced labor, and other rights violations. It is unclear whether they will provide some protection for migrant domestic workers, mostly women, who are especially vulnerable to exploitation and abuse.

Qatar’s Law 14 of 2004, regulating labor in the private sector, limits workers’ hours, requires that foreign workers receive paid annual leave, sets requirements on health and safety, and requires on-time payment of wages each month. In practice, employers continue to flout these requirements with impunity due to the failure of the authorities to enforce this and other laws intended to protect workers’ rights.

Workers typically pay exorbitant recruitment fees and employers regularly take control of their passports when they arrive in Qatar. Many migrant workers complain that their employers fail to pay their wages on time, if at all. Migrant workers are prohibited from unionizing or engaging in strikes, although they make up 99 percent of the private sector workforce. Many migrant workers are obliged to live in cramped, unsanitary conditions, especially those working without documentation.

The kafala (sponsorship) system ties a migrant worker’s legal residence to his or her employer or sponsor. In Qatar, it is codified into law under the terms of Law No. 4 of 2009, which regulates the sponsorship, employment, and residence of expatriate workers. The law provides for the transfer of workers to other sponsors under certain conditions, but in practice workers are rarely able to secure the No Objection Certificates that they require from their existing sponsor to transfer legally to another sponsor. It also requires that foreign workers obtain exit permits from their sponsors when they wish to leave Qatar; in practice, this enables employers to arbitrarily prevent their employees from leaving Qatar and returning to their home country. Workers can become undocumented when employers report them to the authorities as having absconded, or when they fail to pay to renew workers’ annual ID cards. A lack of proper documentation leaves workers at risk of arrest and detention or deportation. It also leaves them at risk of further labor exploitation.

The exit visa requirement and the authorities’ use of arbitrary travel bans means that Qatari employers can prevent their foreign employees from leaving Qatar indefinitely, a power they may use unfairly to secure concessions from foreign employees with whom they are in dispute. Formerly highly-paid expatriates trapped in Qatar in 2014 include former employees of the Al Jazeera Children’s Channel.

In May 2014, Qatar announced a series of labor reforms via a Ministry of Interior press release. It announced that “the current kafala system will be replaced by a system based on employment contracts” but the details it provided indicated that workers would still be bound to their employers. The statement announced that workers would be able to secure No Objection Certificates, but only after 5 years of employment with one employer, and that an automated e-government system would issue exit visas after a 72-hour grace period prior to a foreign worker’s departure.

The press release also said that Qatar would increase the number of labor inspectors, introduce an electronic wage payment system, increase the penalty for passport confiscation, and build suitable housing for 200,000 workers. The statement gave no details on how or when the government would implement the reforms. Nor did the authorities respond to a Human Rights Watch letter questioning the validity of the government’s assertion that the changes amount to replacement of the kafala system. On June 5, the minister of labor added to the confusion when he announced that the model contract being developed by his ministry will determine whether or not a worker will require an exit visa to leave Qatar and whether or not they will receive a No Objection Certificate at the end of their contract.

It is not clear how the proposed reforms will affect migrant domestic workers, a predominately female subset of the migrant worker population, who are especially vulnerable. In addition to the problems the general migrant worker population face, domestic workers suffer verbal, physical, and in some cases, sexual abuse at their places of work. Some are not allowed by their employers to speak to strangers or are locked into the homes in which they are employed. Many are required to work without receiving a day off.

Qatari labor law affords no protection to migrant domestic workers, and does not require employers to allow them rest days or rest periods when at work, or to limit their working hours. The Gulf Cooperation Council (GCC), of which Qatar is a member, is discussing a unified regional contract for domestic workers. However, the contract fails to provide key protections such as a limit on hours of work, and has weak enforcement mechanisms. It also falls short of the minimum standards outlined in the recently adopted International Labour Organization’s Domestic Workers’ Convention, which Qatar has yet to ratify. Even a strong contract, however, would be no substitute for labor law reforms.

In September, Qatar issued a law “on the suppression of electronic crimes,” which poses a clear threat to freedom of expression.  Vaguely worded provisions provide for the prosecution of individuals who publish “false news with the intent of endangering the public order” and information that “infringes social principles or values.”

Qatar’s emir has not yet given final approval to a draft media law that would expose journalists in Qatar to prohibitive financial sanctions if they publish information that damages relations with other Arab states.

Qatar’s penal code contains provisions that are inconsistent with free speech standards under international law. Article 134, for example, prescribes a penalty of up to five years’ imprisonment for anyone who is convicted of criticizing the emir or vice-emir.

In August 2014, authorities detained two British citizens who were in Qatar to research and document living and working conditions for migrant workers, and held them in incommunicado detention for 11 days before releasing them without charge.

Provisions of Law No. 22 of 2006, Qatar’s first codified law to address issues of family and personal status, discriminates against women. Under Article 36, a marriage contract is valid when a woman’s male guardian concludes the contract and two male witnesses are present. Article 57 forbids husbands from hurting their wives physically or morally, but article 58 states that it is a wife’s responsibility to look after the household and to obey her husband. Marital rape is not a crime.

Saudi Arabia, Bahrain, and the United Arab Emirates withdrew their ambassadors from Qatar in March, in response to its support for Islamist groups, notably the Muslim Brotherhood. Normal diplomatic relations resumed in November. Qatar provided assistance in US-led air-strikes on militant Islamist forces in Iraq and Syria.