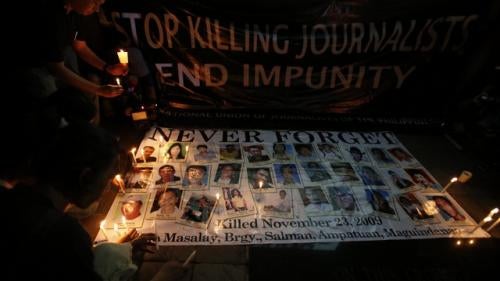 With less than two years left in office, the administration of President Benigno Aquino III continues to send mixed signals about its commitment to improve human rights in the Philippines. Although the number of cases of extrajudicial killings, torture, and enforced disappearances by state security forces has declined in the last four years, such abuses regularly occur.  They are fueled by the government’s  lack of political will to end the longstanding impunity enjoyed by the police and armed forces, a dysfunctional criminal justice system, and military resistance to accountability.

While human rights was a key agenda for Aquino when he took office in 2010, he has failed to make good on many of his commitments, chiefly his expressed intent to end killings of activists and journalists and bring those responsible to justice.  Aquino risked losing political capital by suggesting a term extension for the president, and he found himself at odds with the Supreme Court by calling it an impediment to his proposed reforms.

There has been some progress in tackling certain human rights problems. On August 12, the National Bureau of Investigation arrested retired army general, Jovito Palparan, who is implicated in the alleged enforced disappearance and torture of two activists and others in 2006. The Supreme Court has taken steps to improve the rule of law in the Philippines, for instance launching its “Justice Zone” program in which the investigation, prosecution, and trial of cases are expedited through such electronic or digital methods as issuances of “e-warrants” and “e-subpoenas.”

The Philippine government and the rebel Moro Islamic Liberation Front signed a peace agreement on March 27, 2014, which would extend autonomy to Muslims in Mindanao and end the decades-long conflict there that has engendered serious human rights abuses by all sides.

The arrest of retired army general, Jovito Palparan, in August 2014 by a combined unit of the civilian National Bureau of Investigation and naval intelligence could prove to be a watershed moment in overcoming the military’s historic unwillingness to prosecute personnel for serious human rights abuses.  Palparan is implicated in extrajudicial killings, torture,  and enforced disappearances by forces under his command in  several regions between 2001 and 2005. He has been charged with the kidnapping and torture in 2006 of two women, Sherlyn Cadapan and Karen Empeno. Palparan has said that his actions during this period were to implement the counterinsurgency program of then-President Gloria Macapagal-Arroyo.  Under the Macapagal-Arroyo administration from 2001 to 2010, hundreds of leftist activists were tortured, “disappeared,” and killed.

Palparan was put in the custody of the provincial police in Bulacan, north of Manila, where the Cadapan-Empeno case is being tried. However, on September 15 the court allowed Palparan’s transfer to military custody, prompting protests from families of victims and human rights advocates.

While killings appeared to decrease in 2014 compared to recent years, activists, journalists, environmentalists, and tribal leaders continued to be targets of attack. Among those killed was Fausto Orasan, a 64-year-old tribal group leader in the southern Philippines, who was shot by unidentified gunmen on September 13, 2014, while riding his motorcycle in a village in Cagayan de Oro City. Authorities said Orasan had been a leader of  anti-mining efforts in the area. During one week in August, three other tribal leaders were gunned down in different parts of the country, according to the nongovernmental organization Karapatan. Human Rights Watch has long documented attacks on tribal leaders who opposed mining and other extractive business interests in their communities.

On August 24, 2014, unidentified gunmen shot dead human rights lawyer Rodolfo Felicio in Taytay, a city in Rizal province, east of Manila. Felicio was the fifth member of the activist group National Union of People’s Lawyers to have been killed in the past 10 years.

Killings of journalists continued in late 2013 and early 2014: local media reported at least 26 such killings since Aquino took office in 2010. The trial of the Maguindanao Massacre case, in which 58 people—mostly journalists and media workers—were killed in 2009 allegedly by the militia of the powerful Ampatuan clan in the southern Philippines, was set back by the murder on November 18 of Dennis Sakal, a potential witness for the prosecution.

Although the Aquino administration vowed in 2012 to expedite investigations into killings of journalists by creating a “superbody,” little progress appears to have been made. The superbody had only processed four cases at time of writing, resulting in the conviction of five people. However, the alleged masterminds who planned and financed these killings remained at large.

A “death squad” in the southern city of Tagum that killed hundreds of suspected criminals, including children, was the subject of a Human Rights Watch report in May. The so-called Tagum Death Squad also branched out into contract killing, targeting a range of victims for as little as US$110 per hit, including journalists, village officials, business rivals, alleged drug dealers, tribal leaders, and a judge. The death squad was allegedly formed and financed by then-mayor Rey Uy with the cooperation of city hall officials and members of the local police force.

Despite evidence directly implicating Uy in the death squad operation, the authorities have not arrested him or others implicated in the Tagum City killings.

Death squad killings have been reported in cities across the country, with unidentified gunmen on motorcycles targeting people in public in broad daylight in so-called “riding in tandem” killings. Official responses in 2014 to stem such killings included police roadblocks specifically for motorcycles, banning motorcyclists from riding in pairs, and a proposed law that would ban the use of motorcycle helmets, so cyclists could not hide their identities.

Police Use of Torture

In January, an investigation by the Commission on Human Rights implicated members of the Laguna provincial police in the systematic torture of at least 22 inmates that began in February 2013. The police dealt out torture in a secret location using a spinning wheel like in the “Wheel of Fortune” game show in the United States. At time of writing, 10 police officers implicated in the torture had been dismissed from duty and faced prosecution, while several others were being investigated.

A November report by the Department of Justice detailed allegations of torture by members of the police in Zamboanga City against several suspects arrested in connection with the September 2013 attack on the city by Islamist militants. Human Rights Watch documented several instances of mistreatment of the detainees, several of them children, as well as the militants’ use of civilians as human shields. The government has not investigated the alleged abuses.

In September 2013, Islamist militants attacked Zamboanga, a predominantly Christian city in the south. Ensuing fighting between the militants and government armed forces, including the use of artillery and airstrikes, destroyed neighborhoods,  resulted in dozens of deaths and injuries to civilians, and caused 120,000 people—mostly Muslims—to be displaced from their homes.

A year later, a third of the displaced residents remain in evacuation camps, and more than 160 had died from illnesses mainly linked to poor sanitation.

President Aquino made trips to Europe and the US in 2014 in which Philippine activists protested against the government’s human rights record, particularly the lack of accountability for abuses. The United States and European Union governments have sought to address the problem of impunity, such as by funding programs to improve the performance of police, prosecutors, and the courts.

The US government was more vocal in 2014 than in previous years in communicating its concerns about impunity to the Aquino administration. The US had conditioned a small part ($3 million) of its $20 million annual military aid to the Philippines on improvement in the human rights situation. In 2014, the US increased the military financial assistance to $50 million but most of it was allotted for the Philippine Navy, which has a better human rights record than the army.

The  EU-Philippines Justice Support Program, now in its second phase, aims to improve  the Philippine criminal justice system by, among other things, training police officers and investigators.