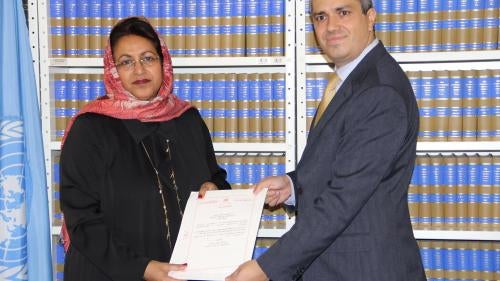 During 2014, the government of Oman continued to restrict rights to freedom of expression, association, and assembly. Authorities detained and harassed critics and pro-reform activists, and withheld security clearance from some due to their peaceful political activities preventing their employment in state services.

On August 20, Oman became the eighth Arab state, and the 162nd country worldwide, to ratify the international Mine Ban treaty.

Freedom of Expression and Pro-Reform Activists

The authorities continued to target peaceful pro-reform activists using short term arrests and detentions and other forms of harassment. Since mass protests in 2011, authorities have engaged in a cycle of prosecutions of activists and critics on charges such as “insulting the Sultan” that criminalize free speech, leading to prison sentences followed by release under pardons granted by Sultan Qaboos. According to local activists, the arrests and prosecutions have had a chilling effect on free speech and the expression of dissent in Oman.

Articles 29, 30, and 31 of Oman’s Basic Law protect freedom of expression and the press, but other laws undercut these safeguards. Authorities in practice did not respect these rights, continuing to restrict online criticism and other content using the 2002 Telecommunications Act, article 26, which penalizes “any person who sends, by means of telecommunications system, a message that violates public order or public morals.”

Authorities arrested pro-reform activists and held them without access to lawyers and their families using a 2011 amendment; the criminal procedure code that empowers security forces to hold detainees without charge for up to 30 days. Some detainees arrested since 2011 have allegedly reported that security forces tortured or otherwise ill-treated them.

Khalfan al-Badwawi, a pro-reform activist, left Oman in December 2013 soon after police released him from several days of incommunicado detention for comments criticizing the government. Authorities refused to disclose his whereabouts to his family during his detention.

Authorities arrested Noah al-Saadi, a blogger and rights activist, on July 13, 2014, and detained him until August 7, before releasing him apparently without charge. Officials had previously detained al-Saadi in September 2013 after he used his blog to criticize the arrest by the authorities of Dr. Talib al-Maamari, a Shura Council member involved in anti-pollution protests at Sohar port and the 2011 mass protests in Sohar by Omanis demanding jobs and an end to official corruption.

Police arrested Mohammed al-Fazari, a prominent blogger and government critic, on August 30, 2014, when he obeyed a summons to appear at the Royal Oman Police headquarters in Muscat concerning “a personal matter.” They detained him incommunicado, allowing him only one phone call, until September 4, when they released him without charge.

On October 31, authorities prevented Saeed al-Jaddad, a human rights activist and pro-reform blogger, from boarding a flight out of the country. They did not provide al-Jaddad with a reason for the travel ban. In 2013, he was arrested and held for eight days in solitary confinement on charges including calling for demonstrations and heaping discredit on state officials before releasing him on bail. In July of that year, the public prosecution summoned al-Jaddad on a new charges:  “Undermining the status and prestige of the state.” Authorities released him on bail but threatened that he may again be interrogated and brought to trial on these charges.

All public gatherings require advance official approval and the authorities arrest and prosecute participants in unapproved gatherings. Some private gatherings are also prohibited under article 137 of the penal code, which prescribes a punishment of up to three years in prison and a fine for anyone who “participates in a private gathering including at least ten individuals with a view to commit a riot or a breach of public order.” Authorities sharply increased the penalties under article 137 after the pro-reform demonstrations of 2011.

The case stemmed from an incident on August 22, 2013, when activists gathered in Liwa to protest industrial pollution at the nearby port of Sohar, which they consider a public health risk. Police used tear gas to disperse demonstrators who had blocked the port’s entrance and, on August 24, arrested Dr. Talib al-Maamari, a local Shura Council member who had attended the demonstration. Authorities denied al-Maamari access to a lawyer for more than 17 days during his detention until the public prosecution had charged him with inciting a crowd and wrongful assembly at a public place. The lower court that tried al-Maamari and al-Baloushi sentenced them to seven and four year prison terms respectively and fines after convicting them of “illegal gathering” and “blocking traffic.”

The authorities closed down the Elixir Cultural Saloon, run by a group of young men and women in Sohar, in September 2014. Oman’s Law on Associations restricts the formation of independent associations, makes official registration mandatory, gives the Ministry of Social Development powers to deny registration without stating reasons and bans political parties.

Article 17 of the Basic Law states that all citizens are equal and bans gender-based discrimination. In practice, however, women continue to face discrimination in law under the Personal Status Law that governs matters such as divorce, inheritance, child custody, and legal guardianship, and in practice.

Oman ratified the international Mine Ban treaty—the Convention on the Prohibition of the Use, Stockpiling, Production and Transfer of Anti-Personnel Mines and on their Destruction—on August 20. The treaty bans the use, production, transfer, and stockpiling of antipersonnel landmines and requires clearance of mined areas within 10 years and assistance to landmine victims. The treaty takes effects for Oman in February 2015, six months after ratification.

During a visit to Oman in September the UN special rapporteur on the rights to freedom of peaceful assembly and of association noted “a pervasive culture of silence and fear affecting anyone who wants to speak and work for reforms in Oman,” and said some activists had “reported reprisals, before and during my visit, following their attempts to contact or meet with me.”

In late 2012, the Gulf Cooperation Council (GCC), of which Oman is a member, revised and re-signed its security cooperation agreement enabling each state party to take legal action against its own or other GCC citizens when they are judged to have interfered in the internal affairs of any GCC state.

Both the United States and the United Kingdom provide significant economic and military aid to the sultanate. Neither country publicly criticized Oman’s human rights abuses in 2013, except in annual reports.