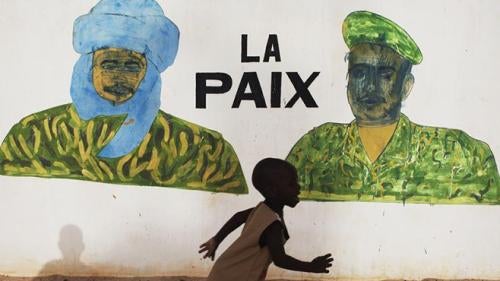 While the political situation in Mali stabilized in 2014, persistent attacks by numerous pro and anti-government armed groups in the north led to a marked deterioration in security in Gao, Kidal, and Timbuktu regions, where the 2013 French-led intervention sought to restore state control.

Throughout 2014, armed groups linked to Al-Qaeda, along with ethnic Tuareg and Arab movements, some seeking autonomy, dramatically increased attacks on Malian soldiers and neutral peacekeepers, and to a lesser extent, on aid workers and other civilians. Little progress was made in reaching a negotiated settlement, advancing justice for abuses, or addressing development challenges.

The withdrawal in May of Malian civil servants and soldiers from key towns in the north, following a brief resumption of hostilities, resulted in a rise in ethnic tension, left large swaths of territory devoid of state authority, and led to a significant rise in banditry by unidentified gunmen. Meanwhile, there was little progress on security sector reform or the disarmament of fighters in the north.

Malian authorities made little effort to investigate and hold accountable those implicated in serious abuses committed during the 2012-2013 armed conflict. However, there was a decrease in abuses by state security forces and progress in the investigation into the 2012 torture and killing of 21 elite soldiers. Rule of law institutions countrywide were weak, in part due to unprofessional practices and inadequate budgetary allocations for the criminal justice system. Corruption, endemic at all levels of government, further impeded Malians’ access to basic health care and education.

Concerns about the deteriorating security situation and re-entrenchment of Al-Qaeda-linked groups in the north sustained diplomatic interest in Mali. The French government played a key role in military matters, the European Union on training and security sector reform, and the United Nations, through the Multidimensional Integrated Stabilization Mission in Mali (MINUSMA), on rule of law and political stability. These actors were largely reluctant to publicly call for investigations into past and ongoing crimes. The International Monetary Fund and World Bank pressed the government over bad economic governance.

Since late September 2013, opposition armed groups carried out several dozen ambushes and suicide bombings, and deployed improvised explosive devices and landmines. Most attacks targeted Malian and French troops, though others targeted civilians and peacekeepers in violation of the laws of war. Landmines on key roads and rocket attacks in major towns generated a climate of fear for civilians, and killed and wounded several. Over 30 UN peacekeepers died in attacks.

In February, the Movement for Unity and Jihad in West Africa (MUJAO) kidnapped five aid workers from the International Committee of the Red Cross; they were freed in April during a French military operation. In May, two aid workers with the Norwegian Refugee Council were killed when their vehicle struck an improvised explosive device near Timbuktu.

A visit by the prime minister to the National Movement for the Liberation of Azawad (MNLA) stronghold of Kidal in May led to brief resumption of hostilities. During the clashes, eight civilians, including six civil servants, were allegedly summarily executed by the armed groups occupying Kidal.

Security in the north was further undermined by persistent inter-communal clashes, particularly involving people from the Peuhl, Tuareg, and Arab ethnic groups, which left dozens dead. Al-Qaeda in the Islamic Maghreb (AQIM) continued at time of writing to hold four hostages; one from France, one from the Netherlands, one from Sweden, and a dual British and South African national. During 2014, one French and one Algerian hostage reportedly died in captivity, while two Algerians captured in Gao in 2012 were released.

In 2014, the number of violations committed by the Malian army decreased, but soldiers were implicated in several cases of arbitrary detention, one instance of excessive use of force in responding to a demonstration in Kidal, and several summary executions, largely targeting Tuareg men. The military hierarchy made some effort to investigate and hold to account soldiers implicated in several of these incidents. Members of the security forces were also implicated in acts of extortion, bribe taking, and to a lesser extent rape.

The government made little progress in holding to account those from all warring factions responsible for laws of war violations committed during the 2012-2013 armed conflict. The government’s provisional release in 2014 of over 40 men associated with the conflict, including several commanders credibly implicated in abuses, raised concern of a de facto amnesty for these crimes. The government characterized the releases, which began in late 2013, as “confidence building measures” in advance of negotiations. They were carried out without regard as to whether the men might have been responsible for serious crimes in violation of international law.

Supreme Court orders passed in 2013 permitted a Bamako court to hear criminal cases from the three northern provinces, and during 2014, dozens of families filed complaints to judicial authorities. With few exceptions, these authorities failed to investigate any of these cases or others that human rights groups and journalists brought to their attention.

There was, however, meaningful progress in the investigation into the torture and enforced disappearance of 21 elite “Red Berets” in 2012. In late 2013 and early 2014, some 25 soldiers, including former coup leader Gen. Amadou Haya Sanogo, were charged in connection with the crimes.

After assuming office in September 2013, President Ibrahim Boubacar Keita dissolved a pre-existing truth commission and, by two executive orders, established the Truth, Justice and Reconciliation Commission; on March 20, the National Assembly ratified the orders. The commission has a three-year mandate, will cover the period from 1960 to 2013, and will consist of 15 members and 7 working groups. It will function under the Ministry of National Reconciliation and Development of the North.

By late 2014, the commissioners had yet to be appointed and the body’s credibility was limited because of the failure to consult sufficiently with a wide variety of stakeholders on its members, mandate powers, and degree of independence.

During 2014, there was progress in re-establishing the judiciary in Timbuktu and Gao regions, evident in the rehabilitation of local courthouses and jails and redeployment of prosecutors, judges, and judicial police who had fled during the armed conflict. However, their ability to conduct investigations outside major towns was limited by the precarious security situation.

Neglect and mismanagement within the Malian judiciary countrywide led to striking deficiencies, including insufficient staffing and logistical constraints. These shortfalls hindered efforts to address impunity for perpetrators of all crimes and contributed to violations of the right to due process.

Because of the courts’ inability to adequately process cases, hundreds of detainees are held in extended pretrial detention in overcrowded jails and detention centers. Judges in Bamako mandated to investigate several hundred suspects detained during the offensive to retake the north made some progress, resulting in the release of scores of men who appeared to have been arbitrarily detained, largely as a result of their ethnicity.

Recruitment of Children and Child Labor

Armed groups in the north continued to recruit and use child soldiers, some as young as 12. During 2014, some 20 schools in the north were at various times occupied by members of the armed groups, pro-government militias, the Malian army and, in one case, MINUSMA. Several children suspected of supporting the armed groups were detained in both the Bamako Central Prison and a gendarme camp in Bamako, in contravention of a 2013 protocol signed by the government stipulating that children were to be placed in a care center managed by the UN Children’s Rights Emergency and Relief Organization.

Child labor in agriculture, domestic service, mining, and other sectors was common, and often included dangerous work that Malian law prohibits for anyone under the age of 18. Child laborers in artisanal gold mining were exposed to health risks from accidents and exposure to toxic mercury.

In June, the UN Security Council renewed the mandate of MINUSMA, the peacekeeping mission with a troop ceiling of 11,200 military personnel, some 70 percent of whom are currently deployed. The UN independent expert on the situation of human rights in Mali, Suliman Baldo, conducted two missions and pressed for progress in the fight against impunity. In March, the UN Human Rights Council passed a resolution that welcomed progress, expressed concerns on continued violations and abuses, and renewed the mandate of the independent expert. The UN Peacebuilding fund supported demobilization, reconciliation, and justice projects.

The African Union (AU) brokered a ceasefire in May that paved the way for Algerian and AU-led negotiations between the Malian government and several armed groups; the talks took place in the Algerian capital, Algiers.

The 1,700 strong French military operation known as Operation Serval was in August transformed into a 3,000-strong regional operation—known as Operation Barkhane—to address the threat of instability in Mauritania, Burkina Faso, Niger, and Chad.

The EU and Dutch took the lead on justice sector reform and support. The UN Development Programme supported the rehabilitation of courthouses, while the United States provided forensic support to the Ministry of Justice.

In May and June 2014, the International Monetary Fund and the World Bank collectively delayed almost US$70 million in payments to the Malian government following questions surrounding the extra-budgetary purchase of a presidential plane and inflated military contracts. An audit revealed overbilling of over $56 million in the military budget.