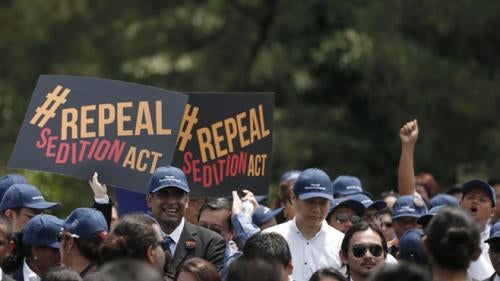 Following 2013 parliamentary elections that returned the ruling party to power, even though the political opposition won a majority of the popular vote, the Malaysian government launched a crackdown on freedom of expression and other civil and political rights that continues to the present. Human rights defenders, activists, and political figures, including opposition leader Anwar Ibrahim, face continuing harassment and persecution.

Freedom of Expression
Article 10 of Malaysia’s Constitution guarantees that every citizen has the right to freedom of expression, but the Malaysian government violates that right on a regular basis.

The biggest threat to free speech comes from the government’s redoubled use of the Sedition Act to prosecute activists and political opponents for making statements critical of the government, its political leaders, or the prime minister’s party, United Malays National Organisation (UMNO), or for remarks the government considers to be derogatory toward Malaysia’s sultans or disrespectful of religion.

From January 2013 to November 2014, the government charged at least 20 people with sedition, including four opposition members of parliament. Charges were also brought against state assemblymen, community and NGO activists, Internet bloggers, an academic, and others. Four people, including the late jurist Karpal Singh, were convicted of sedition for remarks and several were sentenced to prison or fined.

Widespread use of the act has marked serious backtracking by Prime Minister Najib Razak on multiple prior pledges to revoke the Sedition Act and replace it with a so-called Harmony Act. Under fire from political conservatives in UMNO, Najib effectively abandoned the National Unity Consultative Council (NUCC) that he had established to make legislative proposals and conduct consultations on the Harmony Act. On October 16, in only the fourth public march in its history, the Malaysia Bar Council demanded repeal of the act. On November 27, Najib told the annual UMNO convention that the Sedition Act would be retained, and amendments made to strengthen it.

On October 1, Professor Azmi Sharom filed a constitutional challenge to the act, claiming that it violates free speech guarantees in article 10 of the constitution. In early November, the High Court transferred the case to the Federal Court, Malaysia’s apex court, for consideration.

During the year, the government also charged and sentenced activists for expressing views in ways the government claimed violated penal code provisions criminalizing defamation and “insult with intent to provoke a breach of the peace.” It also made use of article 233 of the Communications and Multimedia Act outlawing any communication the government considers “obscene, indecent, false, menacing or offensive.”

The government continues to use the Printing Presses and Publication Act (PPPA), which requires that all publishers obtain a license, to limit the content of publications. The home minister may suspend or revoke a license at any time on grounds of security, public order, or morality.

Malaysiakini, an outspoken online daily, has been a frequent government target. Despite an October 2013 Court of Appeal decision holding that a license to publish is a constitutional right, the Ministry of Home Affairs has refused to issue a license to Malaysiakini on grounds that its articles cause “controversy,” “lack neutrality,” and could cause its readers to “hate national leaders.” On May 15, Prime Minister Najib sued Malaysiakini for defamation based on reader comments on two Malaysiakini columns, one focused on government corruption, and the other on Najib’s leadership capabilities. In August 2013, FZ Daily newspaper received a license to publish, which was suspended a week later and revoked in January 2014. Another newsweekly, The Heat, had its license suspended without explanation on December 21, 2013; it was only permitted to start publishing again in February 2014.

The government also continued the prosecution of NGO activist Lena Hendry in 2014 for allegedly violating the Film Censorship Act for her involvement in screening the documentary film “No Fire Zone: The Killing Fields of Sri Lanka” in Kuala Lumpur in July 2013.

Freedom of Assembly and Association
Organizers of assemblies, marches, and demonstrations had more space in 2014 to spontaneously protest government policies due to an appeals court ruling in May that struck  down a provision of the Peaceful Assembly Act (PAA) requiring that organizers give police 10-day advance notice. However, the government has appealed the decision and government prosecutors have continued to press charges against at least 20 political activists for allegedly violating the notice requirement when they held so-called Black 505 protests after the May 2013 elections.

The government permitted a May 1 rally protesting price and tax hikes to proceed without interference. But on June 22, police badly beat members of Himpunan Hijau protesting the government’s licensing of the Lynas rare earth plant in Pahang. Later, after 15 protesters were arrested and taken to Kuantan police headquarters, thugs roughed up those waiting outside without police intervening.

The government restricts the right to freedom of association by requiring that organizations with seven or more members register with the Registrar of Societies (ROS). The ROS is answerable only to the minister of home affairs who has “absolute discretion” to declare a society illegal. In November, the minister declared the Sarawak Association for Peoples' Aspiration (Sapa) an illegal organization. The ROS remained locked in an almost two-year dispute with the opposition Democratic Action Party (DAP), refusing to recognize the party’s central executive committee or its 120 branch offices. The Ministry of Home Affairs stated the Negara-Ku human rights movement would be considered “illegal” if it did not register with the ROS.

Political Prosecution of Anwar Ibrahim and Karpal Singh
The government continued its politically motivated persecution of opposition leader Anwar Ibrahim. Prosecutors appealed his 2012 acquittal on sodomy charges and in a rushed appeals court process, on March 7, 2014, the court overturned the verdict and sentenced him to a five-year prison term. The appeal to the Federal Court was heard in late October and early November, but the verdict had not been announced at time of writing.

Similarly, in February 2014, the High Court overturned DAP chairman Karpal Singh’s acquittal on a politically motivated sedition charge and issued a fine that would have disqualified him from serving as a legislator. Karpal appealed but died in a car crash in April before the appeal could be heard.

Police Abuse and Impunity
New cases of police torture of suspects in custody, in some cases resulting in their deaths, and excessive use of force in apprehending suspects continued to be reported in 2014. At least 10 suspicious deaths in police custody were recorded in the first nine months of the year.

Human Rights Watch’s report No Answers, No Apology: Police Abuses and Accountability in Malaysia released in March found a pattern of police impunity and a lack of effective external oversight. Rather than following up on the findings, police officials dismissed them and would not consider the report’s substantive recommendations for improving rights performance and accountability.

On April 15, the government announced the creation and operation of a “coroner’s court” with a sessions court judge in each state assigned the duty of examining wrongful deaths and deaths in custody. While this is a small improvement over the previous system in which inexperienced magistrate court judges oversaw inquests, the new approach still is wholly dependent on the police investigating their fellow officers, a situation that has consistently led to cover-ups and impunity.

The government continues to ignore calls from the Malaysia Bar Council and civil society groups to establish an Independent Police Complaints and Misconduct Commission (IPCMC) with the power to receive complaints focused on the police, independently investigate abuses, and sanction those found to have engaged in misconduct. On November 5, the Yang di-Pertuan Agong consented to the appointment of a new chairman and several commissioners for the Enforcement Agencies Integrity Commission (EAIC), the government’s preferred yet ineffectual alternative that to date has lacked necessary resources or effective leadership to ensure oversight and accountability of the police and other enforcement agencies under its mandate.

Criminal Justice System
The government undermined positive steps it had taken in prior years, including its repeal of the Internal Security Act (ISA) and the Emergency (Public Order and Prevention of Crime) Ordinance, when it adopted amendments to the Prevention of Crime Act (PCA) that allow for administrative detention of suspects without judicial review. Under the act, a five-member board has the authority to impose a two-year detention, renewable indefinitely, or order the attachment of electronic monitoring devices to suspected offenders.

The similarly restrictive 2012 Security Offenses Special Measures Act (SOSMA), that replaced the ISA, still permits initial, albeit shortened, police detention without judiciary input. It also broadened the definition of a security offense, ceded to the police rather than the judiciary the power to intercept communications, and even in cases where the suspect is acquitted, permits indefinite appeals during which time the person may be held in custody or tethered to a monitoring device.

Malaysia’s inspector-general of police dismissed civil society calls for the abolishment of the Dangerous Drugs Act (DDA), which permits detention of suspects without trial or warrant. The National Anti-Drug Agency continues to operate around 20 drug detention centers (recently rebranded as Cure & Care Rehabilitation Centers) where people who use drugs are held for between six months to two years.

Malaysia retains the death penalty for various crimes, including drug trafficking, and is not transparent about when and how decisions are made to carry out executions. More than 1,000 persons are estimated to be on death row. Malaysia undertook a review of sentencing guidelines for drug trafficking in line with its pledge at the United Nations Human Rights Council in October 2013 but the results of that review, conducted by the Attorney General’s Office, had not been publicly released at time of writing.

Refugees, Asylum Seekers, and Trafficking Victims
Malaysia’s immigration law does not recognize asylum seekers or refugees. The government is not a party to the Refugee Convention. It takes no responsibility for the education of refugee or migrant children, and does not give refugees legal permission to work.

Sexual Orientation and Gender Identity
Discrimination against lesbian, gay, bisexual, and transgender (LGBT) people is pervasive in Malaysia. In September, Human Rights Watch issued a report “I’m Scared to be a Woman”: Human Rights Abuses against Transgender People in Malaysia that focused on the impact of state-level Sharia (Islamic) laws that prohibit cross-dressing. The report revealed that transgender persons face arbitrary arrest, physical and sexual assault, imprisonment, discriminatory denial of health care and employment, and other abuses. Three transgender women challenged the Sharia ordinance on constitutional grounds in the state of Negeri Sembilan and on November 7, won their appeal in a major victory for rights in the country. However, government prosecutors are expected to appeal the decision.

Key International Actors
Malaysia seeks to position itself in the UN and the international community as a moderate Muslim state prepared to stand up to Islamist extremism, a position for which it gains support from the US and its NATO allies. In October, Malaysia was elected to a seat on the UN Security Council for the 2015-2016 term.

In April, Malaysia hosted US President Barack Obama, and the two countries agreed to upgrade their ties to a “comprehensive partnership.” Obama raised human rights prominently during the visit.

Malaysia also has continued its close engagement with China, its largest trading partner, despite frictions caused by the disappearance on March 8 of Malaysia Airlines flight MH370 en route from Beijing to Kuala Lumpur with 239 people on board.