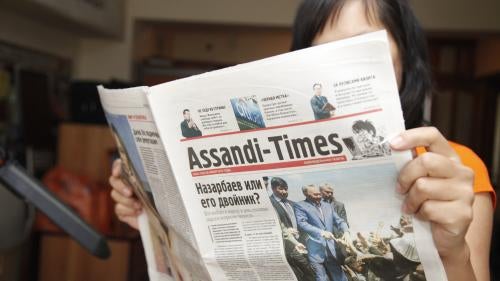 Civil society activist Vadim Kuramshin continues to serve a 12-year prison sentence, despite procedural violations during his trial and concerns that his sentencing in December 2012 was retribution for public criticism of the government. Kuramshin staged a short hunger strike in June to demand medical attention and transfer to a different colony, alleging other inmates beat and harassed him.

On November 19, labor activist Rosa Tuletaeva was released on parole from the penal colony where she had been serving her five-year prison sentence. In March, labor activist Maksat Dosmagambetov, who is serving a six-year sentence, was transferred to a penal colony, affording him more freedoms than a prison. Dosmagambetov underwent an operation in 2014 to remove a tumor in his cheekbone that developed after he was imprisoned.

In March, political opposition leader Vladimir Kozlov was transferred from a prison in north Kazakhstan to one outside Almaty, close to his residence. In May, an Almaty court upheld orders to confiscate Kozlov’s apartment, where his wife and infant son were living, despite legislation preventing the confiscation of a person’s sole property.

On July 2, authorities detained Zinaida Mukhortova, a lawyer, after Kazakhstan’s Supreme Court upheld a ruling to put her in involuntary psychiatric detention. Mukhortova has been repeatedly subject to forced psychiatric detention since 2009, when she alleged a member of parliament from the ruling party interfered in a civil case in which she was involved. On September 18, the United States called on Kazakhstan to immediately release Mukhortova.

After a January court ruling to extradite Mukhtar Ablyazov to Russia and Ukraine was annulled, another French court in October again ruled to extradite Mukhtar Ablyazov to both countries. His lawyers have challenged the decision, but at time of writing, his case had not been reviewed. In December 2013, six months after they were forcibly taken to Kazakhstan, Ablyazov’s wife and daughter were permitted to return to Italy, where they were granted asylum.

On March 11, financial police searched the office of Aman Saulyk, a health and human rights group, and confiscated equipment in connection with a criminal investigation into allegations of “use of funds obtained through illegal means.”

Despite widespread calls to decriminalize libel and amend the overbroad criminal offense of “inciting social, national, clan, racial, or religious discord,” authorities increased sanctions for these offenses in the new criminal code. The government also adopted implementing legislation in January that excessively restricts freedom of expression during states of emergency. In April, the government also introduced criminal charges for “spreading false information.”

Independent and opposition media continued to face harassment and interference in their work. In April, police tried to block journalists from covering a protest outside the Prosecutor General’s office in Astana. A Radio Free Liberty/Radio Europe journalist was jailed for four days on hooliganism charges after covering an anti-Eurasian Economic Union meeting in May.

Media watchdog AdilSoz reported an increase in civil and criminal defamation cases in the first half of 2014, including cases against Internet project Insiderman Editor-in-Chief Valeriy Surganov, and former Assandi Times journalist Natalya Sadykova.

Courts closed the newspaper Pravdivaya Gazeta in February and the Assandi Times in April. The Organization for Security and Cooperation in Europe (OSCE) Media Freedom Representative Dunja Mijatovi described the closure of Pravdivaya Gazeta as “curb[ing] media pluralism.”

Websites, including LiveJournal.com, were blocked at times in 2014. At time of writing, the criminal case against Aleksandr Kharlamov, a journalist, for “inciting religious discord” remained open, although he was released from pretrial detention in 2013.

In a ruling that chills freedom of expression and condones homophobia, an Almaty court in late October awarded 34 million tenge (US$187,000) in damages against Havas Worldwide Kazakhstan, an advertising agency, for a poster featuring Kazakh composer Sagyrbauly Kurmangazy kissing Russian poet Aleksander Pushkin. In September, the agency had been separatelyfined 314 thousand tenge ($1,730) after a court found the same poster “unethnical.”

National Preventative Mechanism Coordination Council monitors began detention visits in 2014. Some police officers faced charges of torture, but impunity remains the norm. According to media reports, on several occasions in 2014, detainees’ relatives publicly raised concerns about mass beatings and ill-treatment in detention. At its November review of Kazakhstan,the United Nations Committee Against Torture (CAT) expressed concern about the gap between law and practice and continued impunity for torture.

The committee found Kazakhstan responsible for torture and failure to investigate in the cases of Oleg Evloev in November 2013 and Rasim Bairamov in May 2014. In both cases, the committee urged Kazakhstan to investigate the complainant’s allegations, provide redress, and ensure full and adequate reparation. On July 30, the Prosecutor’s Office opened a criminal case into Bairamov’s torture allegations.

Mukhtar Dzhakishev, the former president of the state-owned nuclear company imprisoned on embezzlement and fraud charges, alleged that prison officials beat him after his transfer to a penal colony in February. Authorities denied the allegations. In March, the UN Human Rights Committee requested that Kazakhstan “take all necessary measures to protect Mr. Dzhakishev’s health.”

Minority religious groups continued to be subjected to fines and short-term detention in 2014 for violating a restrictive religion law. According to Forum18, a religious freedom watchdog, as of July, 12 people had been jailed and over 45 people fined. In July, an Almaty court imprisoned five men for up to seven-and-a-half years in connection with their membership in the banned religious organization Hizb ut-Tahrir.

On April 4, after his mission to Kazakhstan, the UN special rapporteur on freedom of religion recommended “far-reaching reforms” to the 2011 religion law, finding, for example, that “non-registered religious communities … suffer from serious infringements of their freedom of religion.”

Authorities took no steps to amend a restrictive law on public assemblies and throughout 2014 detained and fined people for organizing or participating in peaceful protests. In February, for example, police in Almaty broke up small-scale protests, including a one-person protest by an Almaty-based blogger.On September 26, police broke up a four-person protest against a Baikonur rocket launch outside the Russian embassy in Astana. The participants were later fined.

In June, Kazakhstan adopted a new restrictive law on trade unions despite repeated calls by independent unions to amend the draft to bring it in line with international human and labor rights standards. In addition, provisions in the new criminal code further limit workers’ right to strike. One such provision is the introduction of criminal sanctions for calling on workers to continue a strike declared illegal by courts.

Other legislation governing the organization, financing, and collective bargaining rights of trade unions remain restrictive. In some instances, authorities interfered in independent trade union activity. For example, the Almaty-based independent union of journalists has repeatedly been denied registration on technical grounds, most recently in November 2014.

In late 2013 and again in early 2014, several parliamentarians called for the adoption of legislation against same-sex relations. At time of writing, no bill had been proposed for consideration.

In March 2014, a European Parliament resolution noted that “the human rights situation in [Kazakhstan] has deteriorated” since the violent end to extended labor strikes in Zhanaozen in December 2011. In October, the leaders of the EU and Kazakhstan announced the completion of the negotiations for an Enhanced Partnership and Cooperation Agreement. The EU failed to use the negotiations to secure human rights reforms despite pledges to that effect made previously by then-foreign affairs chief Catherine Ashton, and as called for in EP resolutions.

The United States remains largely muted on human rights concerns in Kazakhstan. Public comments by Assistant Secretary of State Nisha Biswal in April and Deputy Secretary of State William J. Burns in May focused on security, commercial, and energy aspects of the bilateral relationship and its role in support of the US mission in Afghanistan.

In October, Kazakhstan underwent its second Universal Periodic Review at the UN Human Rights Council. Kazakhstan accepted a number of recommendations, including to abolish the death penalty, but rejected others, including to review the religion law, amend the trade union law, release Zinaida Mukhortova, decriminalize defamation, and remove restrictions on freedom of assembly.

In its March concluding observations, the UN Committee on Elimination of All Forms of Discrimination Against Women called on Kazakhstan to ensure effective investigations into complaints of violence against women and appropriate sanctions for perpetrators.

In March, the UN Committee on the Elimination of Racial Discrimination urged Kazakhstan to continue efforts to adopt a comprehensive anti-discrimination law; expressed concern about “the overly broad” charge of “inciting social, national, clan, racial, or religious discord,” saying it could “lead to unnecessary or disproportionate interference with freedom of expression”; and called on Kazakhstan to “clearly define” the offense.