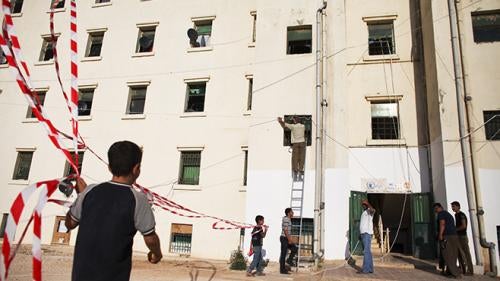 Jordan hosted over 618,000 Syrian refugees in 2014, although the authorities tightened entry restrictions and limited new refugee arrivals. The authorities refused entry to all Palestinian refugees escaping Syria and detained and forcibly deported dozens of those who entered the country irregularly. The government amended the State Security Court law to restrict the court’s jurisdiction to five crimes, and broadened the anti-terrorism law to include provisions that threaten freedom of expression.

Jordanian law criminalizes speech deemed critical of the king, government officials, and institutions, as well as Islam and speech considered defamatory of others. In 2014, the authorities failed to amend the penal code to bring it into compliance with constitutional free speech guarantees strengthened in 2011, and continued to prosecute individuals on charges such as “insulting an official body,” using vaguely worded penal code articles that place impermissible restrictions on free expression.

In June, Jordan issued amendments to its 2006 Anti-Terrorism Law that broaden the definition of terrorism and include acts such as “disturbing [Jordan’s] relations with a foreign state,” a charge already criminalized in the penal code that is regularly used to punish peaceful criticism of foreign countries or their rulers. The amendments remove the requirement of a connection to an act of violence, instead including a vague definition that references acts that “sow discord” or “disturb public order.”

Pursuant to 2012 amendments to the Press and Publications Law, Jordan’s Media Commission continued to censor independent news websites that failed to obtain registration from the commission. On June 30, the Media Commission blocked nine news websites, including an alternate domain name set up by citizen journalism website 7iber, whose website authorities first blocked in June 2013. Some news websites such as 7iber refused to register in protest against the onerous press law requirements and to preserve their independence.

On August 17, police arrested Abd al-Hadi al-Majali, a columnist for the government-owned Al-Ra’i newspaper, after a he wrote a Facebook post that criticized security officials and cursed the country. An Amman court released him on bail August 24, but he faces trial on the charge of “disclosing state secrets” (penal code article 355).

In January, a court convicted four students from Al al-Bayt University in Mafraq on the charge of “insulting a religious symbol” and sentenced them to one month in prison. Prosecutors alleged that their style of dress and musical tastes indicated that they were “devil worshippers.”

The State Security Court delivered judgments in cases against political activists and demonstrators arising from protests in 2011 and 2012. In most cases, the court threw out the charge “undermining the political regime,” a terrorism charge under the penal code, and issued convictions on lesser charges carrying three-month jail sentences, which can be substituted with a fine under Jordanian law.

In January, the government amended the State Security Court law to restrict the court’s jurisdiction to terrorism, espionage, treason, money counterfeiting, and drugs offences. This would bring the court into compliance with article 101 of the constitution, which allows military judges to try civilians only for these five groups of crimes; however, as the penal code classifies vaguely worded offenses such as “undermining the political regime” as terrorism, the court will still be able to try peaceful protesters and others on such charges.

By November, over 618,000 persons from Syria had sought refuge in Jordan since 2011, according to the United Nations High Commissioner for Refugees (UNHCR). Of these, approximately 81,000 were housed at the Zaatari Refugee Camp in northern Jordan, down from over 200,000 in 2013, and 3,900 others were at the Emirates-Jordan camp in Zarqa Governorate. The remaining refugees were living outside the camps. In April, Jordan opened a new camp for Syrian refugees near al-Azraq, around 100 kilometers east of Amman, where authorities began placing newly arrived Syrian refugees. When completed, the camp will have the capacity to host 130,000 refugees, though by November only 11,700 were residing in the camp.

In 2014, Jordanian security forces continued to turn away Palestinian refugees seeking to enter Jordan from Syria at the country’s borders. Security forces also detained and deported Palestinians who entered at unofficial border crossings using forged Syrian identity documents, or who entered illegally via smuggling networks. Officially, Jordan allowed Palestinians from Syria who hold Jordanian citizenship to enter, but in practice Jordan denied entry to such Palestinians whose Jordanian documents had expired, in some cases arbitrarily stripping them of their Jordanian citizenship and forcibly returning them to Syria.

In 2014, the International Labour Organization (ILO) issued two reports highlighting the prevalence of child labor in Jordan, and Jordan’s Ministry of Labor reported that the number of Syrian refugee child laborers had doubled over the previous year, up to 60,000.

Jordan hosted over 70,000 migrant domestic workers in 2014, mostly from the Philippines, Sri Lanka, and Indonesia. Nongovernmental organizations repeatedly referred domestic workers who had suffered multiple abuses to labor ministry investigators who, however, rarely classified them as victims of the crime of trafficking. Instead, they treated each aspect of abuse such as non-payment of salaries separately, sometimes even detaining workers for “escaping” employers.

Jordan’s personal status code remains discriminatory despite a 2010 amendment, which included widening women’s access to divorce and child custody. Marriages between Muslim women and non-Muslims, for instance, are not recognized.

Article 9 of Jordan’s nationality law does not allow Jordanian women married to foreign-born spouses to pass on their nationality to their spouse and children. In November, the cabinet said it would direct government ministries to grant special privileges to non-citizen children of Jordanian women, including free education and access to health services in government institutions. The privileges, however, do not apply to children whose mothers have not resided in Jordan for a minimum of five years, and do not guarantee residency permits.

Despite a minimum age of marriage set at 18, child marriage continued in Jordan, including in the Syrian refugee community.

Penal code articles 98 and 340, which allow reduced sentences for perpetrators of “honor crimes,” remained in force. News reports indicated that at least 10 women and girls were killed by male family members in 2014, including Batool Haddad, a Christian-born woman whose father and brother killed her after she converted to Islam.

Perpetrators of torture or other ill-treatment continued to enjoy near-total impunity due to the authorities’ reliance on special police prosecutors and judges to investigate allegations against, prosecute, and try fellow officers. At the Police Court, where many such cases are heard, two out of three sitting judges are serving police officers appointed by the police. To date, no police or intelligence officer has ever been convicted of torture under article 208 of the penal code.

In June, the State Security court exonerated prominent Salafi cleric Omar Uthman, known as Abu Qatada, of terrorism charges stemming from a 1998 plot to bomb several targets in Amman, including an American school. During the proceedings the court admitted into evidence a confession allegedly obtained through torture in contravention of a treaty it signed with the United Kingdom stating that such confessions could not be admitted into the record without prior justification. In September, the court exonerated Abu Qatada on all charges stemming from a second separate terrorism plot and released him.

The authorities failed to investigate credible allegations of excessive use of force by police while dispersing protests. Eight journalists reported that riot police beat them as they covered the dispersal of a July 9 protest near the Israeli embassy in Amman calling for the expulsion of the Israeli ambassador over Israeli airstrikes on Gaza. The Public Security Directorate announced an independent investigation, bypassing the normal complaint procedure, but its outcome was unknown at time of writing.

Local governors continued to use provisions of the Crime Prevention Law of 1954 to place individuals in administrative detention for up to one year in circumvention of the Criminal Procedure Law.

In February, the United States announced the renewal of a five-year aid package to Jordan through 2019, which provides a minimum of US$360 million in economic assistance, and $300 million in foreign military financing annually. The US granted an additional $340 million in 2014 for “costs related to instability in the region, including for security requirements along the border with Iraq.” The US did not publicly criticize human rights violations in Jordan in 2014 except in annual reports.

The European Union continued to disperse funds from a 2012 pledge of 230.9 million Euros ($298 million) to Jordan for refugee support.

In May, Saudi Arabia announced three memorandums of understanding with Jordan to finance development projects worth $232 million.