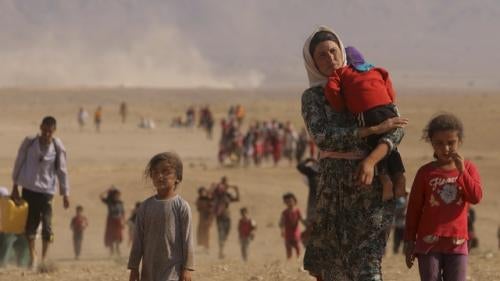 Human rights conditions in Iraq deteriorated in 2014. Suicide attacks, car bombs, and assassinations became more frequent and lethal, killing more than 12,000 people and injuring more than 22,000 between January and December. Government forces’ attacks on largely peaceful demonstrations on December 20, 2013, helped trigger a renewal of armed conflict in Anbar province between local residents, Iraqi security forces, and multiple armed groups. The fighting, which has included indiscriminate attacks by government forces on civilian areas, displaced close to 500,000 people from and within Anbar province between January and September and killed an unknown number of civilians.

The conflict spread north after the extremist group Islamic State, also known as ISIS, took over Mosul, Iraq’s second largest city, on June 10. The group has committed numerous atrocities in Iraq, including ongoing car bombings and suicide attacks in civilian areas; summary executions; torture in detention; discrimination against women; forced marriage; sexual assault and slavery of some Yezidi women and girls; destruction of religious property; and killings and kidnappings of members of religious and ethnic minorities –Shia and Yezidis—in Nineveh province.

Government security forces and pro-government militias carried out attacks on civilians in Sunni and mixed Sunni-Shia areas, including kidnapping and summary executions, and were responsible for arbitrary arrests, disappearances, and torture.

In April, in the lead up to parliamentary elections, authorities closed media stations critical of the government and issued mandatory “guidelines” for journalists prohibiting unfavorable coverage of government military and security operations.

Elections on April 30 were largely peaceful but marred by irregularities, including harassment and bribing of voters. Prime Minister Nuri al-Maliki’s State of Law coalition won a plurality but Hayder al-Abadi, from the prime minister’s party, replaced Maliki as prime minister on September 9 as a result of waning support for Maliki in the aftermath of the loss of Mosul to ISIS. Abadi formed a government on the same day, but was unable to bring parties to agree on the appointment of interior and defense ministers.

On September 14, Abadi order the air force to cease strikes on civilian areas even where ISIS was present, but airstrikes continued in Fallujah and northern Iraq to the end of the year. On September 7, US President Barack Obama authorized US air strikes against ISIS at the request of the Iraqi government. As of December, the US had carried out over 160 air strikes throughout the country.

According to the UN High Commissioner for Refugees, as of September 2014, more than 900,000 Iraqis were internally displaced due to conflict.

Both government forces and armed groups were responsible for attacks that targeted or indiscriminately harmed civilians.

Since early May, government forces dropped barrel bombs on residential neighborhoods of Fallujah and surrounding areas, causing civilian casualties and forcing thousands of residents to flee.

Seventeen airstrikes, six of them involving barrel bombs, killed at least 75 people in the first half of July.

In March, former Prime Minister al-Maliki told senior security advisers that he would form a new security force consisting of three militias: Asa’ib, Kita’ib Hezbollah, and the Badr Brigades. These militias kidnapped and murdered Sunni civilians throughout Baghdad, Diyala, and Hilla provinces, at a time when the armed conflict between government forces and Sunni insurgents was intensifying.

According to witnesses and medical and government sources, pro-government militias were responsible for the killing of 61 Sunni men between June 1 and July 9, 2014, and the killing of at least 48 Sunni men in March and April in villages and towns in an area known as the “Baghdad Belt.” Dozens of residents of five towns in the Baghdad Belt said that security forces, alongside government-backed militias, attacked their towns, kidnapping and killing residents and setting fire to their homes, livestock, and crops.

A survivor of an attack on a Sunni mosque in eastern Diyala province in August said that members of Asa’ib Ahl al-Haqq entered the mosque during the Friday prayer, shot and killed the imam, and then opened fire on the other men in the mosque, killing at least 70 people. Three other Diyala residents reported that Asa’ib Ahl al-Haqq had kidnapped and killed their relatives.

ISIS took over the northern Iraqi city of Mosul on June 10, killing, kidnapping, and threatening civilians, particularly religious and ethnic minorities. It reportedly killed at least 40 Shia Turkmen, including children, and issued orders barring Kurdish, Yazidi and Christian employees from returning to their government jobs. According to Shabak and Shia Turkmen leaders, ISIS killed seven Shabak and at least four of the Turkmen it had taken prisoner.

Other anti-government Sunni armed groups fighting against the government, including Ba’athists, the Naqshabandi Army, the Islamic Army, Jeish al-Mujahideen, and groups of community-based fighters have also committed abuses against civilians, sometimes fighting alongside ISIS and sometimes against ISIS. In February, fighters from the Military Council, a group of local military leaders, captured and summarily executed 17 SWAT members in Ramadi.

On December 30, 2013, security forces attacked demonstrators in a public square in Ramadi where Sunnis had gathered every Friday for a year to protest perceived government abuses of the Sunni population. The attack left 17 people dead and helped to trigger renewed conflict in Anbar province that continued throughout the year. The army closed the main eastern, northern, and southern checkpoints to Fallujah, and elsewhere in Anbar, refusing to allow people, medicine, or food to enter or leave the city.

The government failed to investigate the April 23, 2013 attack on a demonstration camp in Hawija in which soldiers, federal police, and SWAT forces fired on a crowd of about 1,000 demonstrators, killing more than 50.

The Committee to Protect Journalists named Iraq the “worst nation” on its 2014 Impunity Index of unsolved journalist murders, noting that a resurgence of armed groups “propelled a spike” in journalist killings.

The government-run Communications and Media Commission issued “mandatory” guidelines on June 18 to regulate media “during the war on terror.” Article 1 forbids media from broadcasting or publishing material that “may be interpreted as being against the security forces” and instead requires that they “focus on the security achievements of the armed forces, by repetition throughout the day.” This includes “praising the heroic acts of security personnel.”

On June 21, the commission wrote to a media outlet that reported critically about the government, warning that “if this kind of broadcasting is repeated” the commission would revoke their license. On June 24, Egypt’s broadcast regulator barred two privately owned Iraqi television stations based in Cairo from access to Egypt’s main satellite system, after Egyptian officials received complaints from Baghdad about the stations’ content. According to a staff member of one of the channels, Al-Baghdadiyya, 16 police officers came to the station’s Baghdad office around June 20, beat two guards so badly that they required hospitalization, and confiscated some of the station’s equipment.

On June 13, the central and Kurdish regional governments separately blocked social media platforms including Facebook, Twitter, Skype, and YouTube, and in some places tried to block the Internet completely. The government lifted the ban intermittently throughout the rest of the year.

On February 6, Human Rights Watch issued a report documenting how authorities illegally detained women and subjected many to torture and ill-treatment, including sexual abuse. Iraq’s judiciary frequently based convictions on coerced confessions and trial proceedings fell far short of international standards, including in cases against women.

Authorities detained many women for months and even years before seeing a judge. Women were frequently detained with their young children, who were deprived of access to education and adequate health care. The government has not investigated these documented allegations of abuse.

On February 25, Iraq’s Council of Ministers passed a draft Jaafari Personal Status Law. As of December, parliament had not voted on the discriminatory legislation, which would restrict women’s rights in matters of inheritance and parental and other rights after divorce, make it easier for men to take multiple wives, and allow girls to be married from age nine.

Many Iraqi women, having lost their husbands as a result of armed conflict, generalized violence, and displacement, are vulnerable to trafficking for sexual exploitation and prostitution. The parliament passed a counter-trafficking law in April 2012, but authorities have done little to enforce it.

After it took over Mosul, ISIS kidnapped hundreds of Yezidi women and children, and forced some young women and girls to marry its members. The group systematically separated unmarried women and girls as young as 12 from adult relatives. Some women and girls were also subject to sexual assault and slavery. In October, ISIS confirmed that they were enslaving women and attempted to provide religious justification for their actions.

According to the United Nations High Commissioner for Refugees, Iraq continues to receive large numbers of Syrian refugees, 500,000 since 2011, as well as the return of many Iraqi refugees from Syria. The conflict in Anbar displaced some 500,000 Iraqis. The Iraqi government prevented residents in many parts of Anbar province from leaving areas where fighting is taking place and obstructed humanitarian aid from getting in.

Displaced persons within Iraq in December topped 1.9 million and many reside in squatter settlements without access to necessities such as clean water, electricity, and sanitation, and the government has announced no plan for their return to their homes.

Despite plentiful evidence that Iraqi security forces systematically abused detainees and indiscriminately attacked civilian areas—abuses that increased in the escalating conflict with ISIS and other armed groups—the US delivered two shipments of weapons, including Hellfire missiles, after Prime Minister al-Maliki visited Washington in December 2013.

On August 7, President Obama authorized military strikes on ISIS forces in Iraq. According to the US Department of Defense, as of September 20 the US had conducted more than 160 strikes near Erbil, Amerli, Sinjar, the Mosul Dam, and Haditha. France, Jordan and the United Arab Emirates all also carried out air strikes, ostensibly against ISIS targets, in September.

US officials have not publicly called on the Iraqi government to investigate abuses committed by security forces and pro-government militia, and has not conditioned military support to Iraq on human rights reforms as required by US law.

On September 1, the UN Human Rights Council requested that the Office of the High Commissioner for Human Rights dispatch a fact-finding committee to investigate violations committed by ISIS and its associates. The council’s request failed to include abuses by government forces or its allied militas.