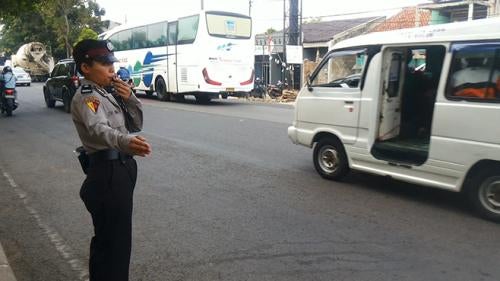 Joko Widodo, popularly known as “Jokowi,” took office on October 20, 2014, after winning a tightly contested presidential election on July 9. The election was a watershed; Widodo is the first Indonesian president who has neither a military background nor an elite family pedigree.

Widodo’s campaign focused primarily on economic issues, but he made commitments on several of the pressing human rights issues he inherited, including pledges to investigate the enforced disappearance of 13 pro-democracy activists in 1998 in the dying days of the Suharto dictatorship and to lift restrictions on foreign journalists from traveling to and reporting from Papua and West Papua provinces. Those commitments are vague, however, and had yet to be backed by specific directives or policy measures at time of writing.

The human rights record of Jokowi’s predecessor, Susilo Bambang Yudhoyono, in office for 10 years, was characterized more by failures and missed opportunities than by successes. Yudhoyono’s government made little progress in ending impunity for past serious human rights abuses by security forces; failed to protect the rights of Indonesia’s religious minorities from increasing harassment, intimidation, and violence by Islamist militants; allowed the enforcement of local Islamic bylaws that violate rights of women, LGBT people, and religious minorities; and failed to address continuing abuses in Papua.

According to the Jakarta-based Setara Institute, which monitors religious freedom, there were 230 attacks on religious minorities in Indonesia in 2013 and 107 cases in 2014 through November. The alleged perpetrators were almost all  Sunni Islamist militants; the targets included Christians, Ahmadiyah, Shia, Sufi Muslims, and native faith believers.

Throughout 2014, two Christian congregations in the Jakarta suburbs—GKI Yasmin and HKBP Filadelfia—continued to worship in private houses due to the government’s failure to enforce Supreme Court decisions ordering local officials to issue building permits for the congregations. National regulations, including ministerial decrees on constructing houses of worship and a decree against religious practice by the Ahmadiyah community, discriminate against religious minorities and foster intolerance.

On May 29, Islamist militants carrying wooden bats and iron sticks attacked the home of book publisher Julius Felicianus in Yogyakarta while his family conducted an evening Christian prayer meeting. The attack resulted in injuries to seven participants, including fractures and head wounds. Police arrested the leader of the attack but later released him after local authorities pressured Felicianus to drop charges on the basis of “religious harmony.”

On June 1, Islamist militants attacked a building in Pangukan village in Sleman, Central Java, in which residents had been conducting Pentacostal services. Police arrested the leader of the attack, but also filed criminal charges against pastor Nico Lomboan, the  owner of the property, for violating a 2012 government ban against using private residences for religious services.

While Yudhoyono condemned sectarian violence by the extremist Islamic State group in Iraq and Syria, he downplayed the harassment, intimidation, and violence committed by Islamist militants against Indonesia’s religious minorities, claiming it is “understandable that sometimes there will be conflict between different groups.”

In July, Minister of Religious Affairs Lukman Saifuddin publicly expressed support for allowing followers of the Bahai faith to receive national identification cards, marriage certificates, and other official documents that identify them as Bahai. But Home Affairs Minister Gamawan Fauzi rejected Saifuddin’s proposal, arguing that he could only legally issue documents listing one of Indonesia’s six officially recognized religions: Islam, Protestanism, Catholism, Hinduism, Buddhism, and Confucianism. Fauzi suggested Bahai members choose one of these instead.

On September 4, five law students from the University of Indonesia in Jakarta filed a petition at the Constitutional Court, demanding revocation of an article of the 1974 Marriage Law that bans inter-religious marriage. The petition argues that the law discriminates against mixed-faith couples.

As of October, according to the “Papuans Behind Bars” website, 68 Papuans were imprisoned or awaiting trial for peaceful advocacy of independence.

Indonesian police arrested French journalists Valentine Bourrat and Thomas Dandois on August 6 in Wamena on charges of “working illegally” without a journalist visa while filming a documentary for Franco-German Arte TV. Areki Wanimbo, the Lanny Jaya tribal chief, whom the journalists had interviewed, was also arrested. A police spokesman initially said that the journalists would be charged with subversion for allegedly filming OPM members, but the two ultimately were charged with and convicted of “abusive use of entry visas” on October 24. They left Papua three days later, having served the requisite time in custody.  Wanimbo, however, was still being held at time of writing, charged with subversion without a clear factual basis, and facing trial.

On August 26, Martinus Yohame, leader of the West Papua National Committee in Sorong, was found dead inside a sack in the sea, a week after he went missing in the lead-up to President Yudhoyono’s visit to Sorong. Yohame had also talked to the French journalists.

Although Jokowi pledged to open Papua to foreign journalists, as noted above, his cabinet also proposed subdividing  Papua from two provinces into four smaller provinces and  encouraging greater migration to Papua, proposals likely to exacerbate tensions there.

The Ministry of Forestry continued in 2014 to include forest lands claimed by indigenous communities within state forest concessions awarded to timber and plantation companies. In May 2013, the Constitutional Court rebuked the ministry for the practice and declared unconstitutional a provision of the 1999 Forestry Law that had enabled it.

In October 2014, President Widodo merged the Agriculture Ministry and the National Land Authority into a single ministry and did the same with the Ministry of Forestry and the Ministry of Environment. Activists hope the consolidation will improve efficiency, reduce corruption, and allow for more effective government oversight of land issues.

The Indonesian government continues to arrest peaceful protesters who raise separatist flags. On April 25, police in Ambon arrested nine people who led a prayer to commemorate the 1950 declaration of an independent “South Moluccas Republic.” The nine were charged with treason and in November were still on trial.

On August 30, Florence Sihombing, a graduate student at Gadjah Mada University in Yogyakarta, was arrested on criminal defamation charges after she called the city “poor, stupid and uncultured” on a social media network. Police dropped all charges and released Sihombing on September 1 on condition that the university impose academic sanctions against her. The university responded on September 9 by suspending Sihombing for one semester.

On August 15, police detained journalist Aprila Wayar of Jubi, a Papuan news service, for photographing police beating nine student protesters with rifle butts at Cenderawasih University in Jayapura, Papua. Police released Wayar, along with the photos she had taken, after several hours.

Security forces responsible for serious violations of human rights continue to enjoy impunity. September 2014 marked the 10th anniversary of the murder of the prominent human rights defender Munir Said Thalib. Munir was poisoned on a Garuda Indonesia flight on September 7, 2004. Despite strong evidence that the conspiracy to kill Munir went beyond the three individuals convicted in connection with the crime and involved high levels of the National Intelligence Agency, Yudhoyono failed to deliver on promises to bring all perpetrators to justice.

Parliament failed to amend the 1997 Law on Military Tribunals even though the Yudhoyono administration submitted a new draft law in February. The 1997 law is widely seen as providing impunity to members of the military involved in human rights abuses and other crimes. If approved, the amendment would pave the way for soldiers to be tried in civilian courts for human rights violations.

No progress was made on accountability for serious security force abuses during the 32-year rule of President Suharto, including the mass killings of 1965-66, atrocities in counterinsurgency operations in Aceh, East Timor, and Papua, killings in Kalimantan, Lampung, Tanjung priok, and other prominent cases.

Indonesia has a total of 279 discriminatory local regulations targeting women. A total of 90 of those rules require girls and women, mostly students and civil servants, to wear the hijab. The mandatory hijab is also imposed on Christian girls in some areas.

On September 27, the Aceh parliament passed two Islamic bylaws which create new discriminatory offenses that do not exist in the Indonesian criminal code. The bylaws extend Islamic law to non-Muslims, criminalizing alcohol drinking, consensual same-sex sexual acts, homosexuality, as well as all sexual relations outside of marriage. The bylaws permit as punishment up to 100 lashes and up to 100 months in prison.

Indonesia remains a transit point to Australia for refugees and asylum seekers fleeing persecution and violence in countries including Somalia, Afghanistan, Pakistan, and Burma.

As of May 2014, there were approximately 10,509 refugees and asylum seekers in Indonesia, all living in legal limbo because Indonesia lacks an asylum law. This number includes 331 migrant children detained in immigration centers, of which 110 were unaccompanied minors.

While Indonesia delegates responsibility for processing refugees and asylum seekers to the office of the United Nations High Commissioner for Refugees (UNHCR), it often refuses to release even UNHCR-recognized refugees from detention centers, where conditions are poor and mistreatment is common. Those who are released face the constant threat of re-arrest and further detention.

The law seeks to reduce stigma and discrimination against people with psychosocial disabilities and guarantees the right to protection from neglect, violence, and exploitation. The law also provides accountability for abuses, including pasung, and promises access to services in the community. However, the law also contains problematic provisions that allow for treatment without informed consent of persons with psychosocial disabilities if they are deemed “incompetent.”

On September 6, US Secretary of State John Kerry issued a statement on the 10th anniversary of rights activist Munir’s assasination: “Still today, justice has not been served. Full accountability for all those allegedly involved remains elusive.”

In August, Australia and Indonesia signed a vaguely worded agreement on surveillance and intelligence gathering. In October, the Australian senate passed a motion calling for the release of the two French journalists imprisoned in Papua and noting that press freedom in Papua is "tightly restricted" by the Indonesian government.