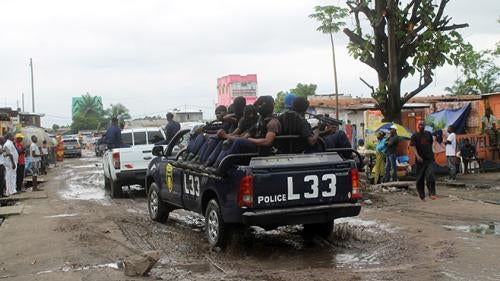 In late 2013, there was a period of optimism that armed violence and attacks on civilians might decrease in eastern Democratic Republic of Congo, following the defeat of the abusive M23 armed group, and the subsequent surrender of combatants from other armed groups. But in 2014, the government made little progress in capitalizing on these opportunities to improve security for civilians in the east.

The M23, whose fighters carried out widespread war crimes during its 19-month rebellion, was defeated in November 2013 after international pressure on the group’s Rwandan backers and the deployment of a United Nations “intervention brigade” to conduct offensive operations against armed groups and strengthen the MONUSCO peacekeeping mission. Several thousand fighters from other armed groups surrendered in the weeks that followed. But the government stalled in implementing a new Disarmament, Demobilization, and Reintegration (DDR) program for former combatants, and there were few efforts made to bring to justice M23 and other armed group leaders implicated in abuses. Numerous armed groups remain active and their fighters continue to carry out brutal attacks on civilians. Government security forces also committed serious abuses against civilians.

In the capital, Kinshasa, the Congolese police launched “Operation Likofi” in November 2013 to remove gang members known as “kuluna” from the streets. During the operation, the police extrajudicially executed at least 51 young men and boys and forcibly disappeared 33 others. Police dragged some of victims out of their houses at night and shot them dead before taking their bodies away.

In October and November 2013, as the army moved into territories previously controlled by the M23 in eastern Congo, soldiers raped at least 41 women and girls. Soldiers and intelligence officers in Rutshuru arbitrarily arrested several people, accused them of supporting the M23, and forced them to pay money for their release.

Over 100 former combatants from various armed groups in eastern Congo, their wives and children died from starvation and disease in Kotakoli, a remote military camp in Congo’s Equateur province, after government officials failed to provide them with adequate food and health care. The victims were part of a group of 941 former combatants and their dependents sent to Kotakoli in September 2013 after they had voluntarily surrendered.

Conditions were also difficult for former combatants in the east. After the M23’s defeat, several thousand fighters from more than 20 armed groups surrendered. But the surrender rate quickly slowed as former fighters languished in squalid conditions at a regroupment site in Bweremana, North Kivu. Tired of waiting and receiving mixed messages from the government, many fighters and their leaders left.

Plans for the government’s new “DDR III” program were finalized in June, but implementation was delayed as wrangling continued among the government, donors, and MONUSCO about the program’s funding.

Numerous armed groups carried out brutal attacks on civilians in eastern Congo, including in North and South Kivu, Katanga, and Orientale provinces. Mai Mai Sheka fighters—led by Ntabo Ntaberi Sheka, sought on a Congolese arrest warrant for crimes against humanity—killed, mutilated, and raped civilians in North Kivu. In September and October 2013, Sheka fighters abducted at least 20 schoolchildren, marched them through the forest, and killed those who were too tired or weak. In late 2013, Raia Mutomboki combatants hacked to death by machete or shot dead at least 21 Hutu civilians in Masisi, North Kivu. In June, armed assailants killed at least 30 people in Mutarule, South Kivu, including many who were attending an outdoor church service. Congolese soldiers and MONUSCO peacekeepers stationed nearby were aware of the attack but failed to intervene.

In January, the army began operations in Beni territory, North Kivu, against the Allied Democratic Forces (ADF), an armed group made up of Congolese and Ugandan fighters who have killed and kidnapped numerous civilians. During a wave of brutal attacks between October and December, over 175 civilians were killed in Beni. Many were hacked to death by machetes and axes. At time of writing, it remained unclear who was responsible for the attacks.

In September, the Democratic Forces for the Liberation of Rwanda (FDLR) attacked Buruko, North Kivu, killing three adults and two children. The FDLR is a largely Rwandan Hutu armed group, some of whose members participated in the 1994 genocide in Rwanda. FDLR combatants have been responsible for widespread war crimes in eastern Congo, including ethnic massacres and mass rapes. Soon after the M23’s defeat, and following indications that military operations might be launched against them, the FDLR leadership announced they were going to lay down their weapons. In May and June, nearly 200 FDLR combatants surrendered. The International Conference on the Great Lakes Region (ICGLR) and the Southern Africa Development Community (SADC) gave the FDLR a six-month deadline to disarm before the Congolese army and MONUSCO would launch military operations.

State agents arbitrarily detained and threatened Virunga National Park rangers and activists after they criticized plans for oil exploration by SOCO International, a British oil company. On April 15, unidentified armed men shot and seriously wounded the park’s director, Emmanuel de Mérode. In April and May, two fishermen were found dead hours after they had criticized SOCO’s activities in the park and argued with soldiers who work alongside SOCO.

Political tensions increased with protests across the country against proposals to change Congo’s constitution and allow President Joseph Kabila to run for a third term. On several occasions, authorities blocked the activities of Vital Kamerhe, president of one of Congo’s main opposition parties, the Union for the Congolese Nation (UNC). During an opposition rally in Bukavu in February, at least 25 civilians were injured when police beat protesters and fired teargas and live bullets at the crowd. In September, six demonstrators and several student bystanders were injured when police fired teargas and beat opposition supporters during a march in Goma.

On August 5, UNC Secretary-General Jean-Bertrand Ewanga was arrested after giving a speech at an opposition rally. Following an apparently politically motivated trial with numerous irregularities, Ewanga was convicted by Congo’s Supreme Court and sentenced to one year in prison for insulting the president, the prime minister, and both presidents of parliament.

A draft Congolese law to establish specialized mixed chambers to try war crimes and crimes against humanity committed in Congo since the 1990s was adopted by the Council of Ministers on April 22 and presented to the National Assembly on May 2. The proposed chambers would benefit initially from the presence of non-Congolese staff. Citing technical concerns, members of parliament rejected the admissibility of the text on May 8. Government officials have said they will correct the technical errors and resubmit the draft law to parliament.

A year after the mass rape of at least 76 women and girls by soldiers in and around Minova, Congo’s Military Operational Court opened a trial on November 20, 2013, for 39 soldiers, including five high-ranking officers, on charges of war crimes and other offenses. On May 5, the verdict was announced, with only two low-ranking soldiers convicted of rape.

On November 7, a Congolese military court convicted Gen. Jérôme Kakwavu for the war crimes of rape, murder, and torture and sentenced him to 10 years in prison, making him the first Congolese general successfully prosecuted for rape.

On March 7, the International Criminal Court (ICC) found Germain Katanga guilty of war crimes and crimes against humanity for being an accomplice in murders and an attack on civilians in Bogoro, Ituri, on February 24, 2003. On May 23, he was sentenced to 12 years in prison. Katanga is the former chief of staff of the Patriotic Resistance Front in Ituri (FRPI). Katanga decided not to appeal the decision and issued an apology to the victims.

On June 9, the ICC confirmed 18 charges of war crimes and crimes against humanity committed in northeastern Congo in 2002 and 2003 against Bosco Ntaganda, a former Congolese military commander and leader of various Rwandan-backed armed groups in Congo since the late 1990s. Ntaganda had surrendered to the United States embassy in Rwanda in March 2013 and was transferred to The Hague.

The ICC arrest warrant for war crimes against Gen. Sylvestre Mudacumura, the FDLR’s military leader, has been pending since 2012.

Since the M23’s defeat, there has been minimal progress in implementing the “Peace, Security and Cooperation Framework for the Democratic Republic of Congo and the Region” (also known as the “Framework Agreement”), signed by 11 African countries in February 2013, under the auspices of the UN secretary-general.

The Congolese government passed an amnesty law in February for insurrectional acts, acts of war, and political infractions committed between 2006 and 2013. The amnesty does not apply to grave international and human rights crimes.

Many of the M23 leaders responsible for serious human rights abuses remain in Rwanda and Uganda, including over a dozen who are sought on Congolese arrest warrants. They are effectively shielded from justice, despite commitments made by the Rwandan and Ugandan governments to support regional justice efforts and to neither harbor nor protect people accused of war crimes or crimes against humanity.