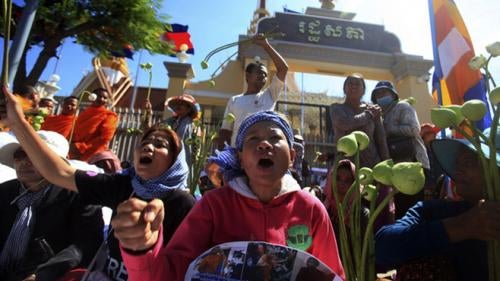 The past year saw determined and often-violent efforts by the government of Prime Minister Hun Sen and his Cambodian People’s Party (CPP) to suppress mass protests against the deeply flawed July 2013 parliamentary elections, and force the opposition Cambodia National Rescue Party (CNRP), to accept the election results, and end its boycott of the National Assembly. The government imposed bans on peaceful protests, including strikes by trade unions campaigning for increased wages. In some cases, protesters engaged in attacks in response to security force repression.

A July 2014, CPP-CNRP agreement ended the opposition’s boycott of the National Assembly. The agreement, which followed the arrest of prominent CNRP leader Mu Sochua, and six other CNRP assembly members on trumped-up charges, failed to commit the CPP to implement institutional and legal reforms to ensure that future elections will be free and fair, or to guarantee freedom of expression and opinion, peaceful assembly and association, or fair trials.

Poverty remained particularly severe in the countryside, while urban workers also suffered from wages so low they contribute to widespread malnutrition. Victims of land concessions to agro-industrial business interests—the major cause of dispossession of land from farmers, and resulting land disputes—made little progress in receiving adequate compensation and resettlement packages. Government officials and judges remained mired in corruption, but almost all were immune from action by courts and the government’s Anti-Corruption Unit, which only targeted petty cases involving those without CPP political protection.

Excessive Use of Lethal and Other Force

In early January, authorities banned all protests, in part to try to force organized labor in the garment industry to lower their demands for a minimum wage increase. Gendarme, police, and para-police personnel killed at least seven people and injured dozens of others mostly during the first seven months of the year, before the ban was partly lifted. Protesters also injured several members of the security forces.

Since the CPP has been in power, members and commanders of government security forces have enjoyed impunity from investigation, let alone prosecution, for serious human rights abuses, including political assassinations, other extrajudicial killings, and torture.  Instead, politically partisan police, prosecutors, and judges pursued at least 87 trumped-up cases against CNRP leaders and activists, members of other opposition political groups, prominent trade union figures, urban civil society organizers, and ordinary workers from factories around Phnom Penh.

The Phnom Penh Municipal Court sentenced 55 people to prison after unfair trials, on charges such as “treacherously plotting” to stage an armed insurrection, or instigating, inciting, or perpetrating violence, obstructing traffic, or “violent resistance against a public official.” In these proceedings, no credible evidence was presented to support a guilty verdict, while evidence of security force violence was systematically disallowed. Although 30 of the 55 received suspended sentences, 23 had already spent many months of pretrial detention in an overcrowded, substandard, and isolated prison.

Criminal cases pending included, alleged incitement to violence by CNRP President Sam Rainsy, Vice President Kem Sokha, and union leader Rong Chhun for opposing the government’s blanket ban on protests; charges against seven other CNRP assembly members and nine CNRP activists for leading, or participating in a violent “insurrection” and other crimes related to a security force-provoked melee at a CNRP-sponsored protest in July 2014; charges of incitement to violence and other crimes against six union leaders in connection with worker unrest during a general strike in December 2013-January 2014; charges of “treacherous plotting” and other crimes against a political activist for distributing a banned book in 2014; and charges against a Buddhist monk and three youths in connection with protests against election unfairness and other alleged government abuses dating back to 2011.

The ill-effects of often illegal land acquisitions, by politically powerful individuals and their business partners, and forced evictions, continued to mount. The number of people affected by state-involved land conflicts since 2000 passed the half-million mark in March 2014, according to calculations by the local nongovernmental organization LICADHO. The rate of new disputes was higher than in 2013. Many of the new disputes ensued from the failure of the authorities to distribute land titles awarded to rural residents as part of a 2012-2013 scheme, personally conceived and overseen by Hun Sen.

In August 2014, Hun Sen blamed his government subordinates for failing to resolve disputes, repeating many previous pledges to end unlawful land takings. At least four people remain imprisoned after convictions in previous years for opposing land takings, while charges against at least 19 others were pending in various provincial courts.

Arbitrary Detention, Torture, and Other Ill-Treatment

People held during investigation, or prosecution for common criminal offenses, or convicted in court, were still routinely tortured, or otherwise ill-treated. The police and prison authorities, beat, pistol-whipped, used electro-shock, kicked, slapped, and punched inmates, often until they become unconscious. Much of the torture was aimed at extracting confessions or extorting money.

Amid politically motivated prosecutions and unfair trials, the CPP further tightened its control over the judiciary by rushing passage of three laws through the National Assembly during the opposition boycott.

Laws on the Organization of the Courts, the Statute of Judges and Prosecutors, and the Organization and Functioning of the Supreme Council of the Magistracy, promulgated on July 13, 2014, increased government control over a politically subservient Supreme Council of the Magistracy, and weakened provisions for judicial independence.

Together, the laws facilitated further encroachment by the government on areas properly reserved for the judiciary under the principle of separation of powers including, government control over the judiciary’s budgetary finance and administrative matters, restrictions on the rights of judges and prosecutors to freedom of expression, and fewer safeguards for judicial independence in selection, promotion, removal, and disciplinary procedures for judges.

The legislation put the minister of justice at the center of all key decision-making by the judiciary and the Supreme Council of the Magistracy, the body charged with appointing, disciplining, and overseeing the country’s judicial system.

On August 7, 2014, eight years after the creation of the United Nations-assisted Extraordinary Chambers in the Courts of Cambodia, former Khmer Rouge leaders Nuon Chea and Khieu Samphan were convicted of crimes against humanity, including extermination and political persecution. These were committed as part of the Khmer Rouge’s forced relocations of Cambodians from urban areas to the countryside and around the countryside in 1975, during which many were executed.

The two continued to face trial on other charges, including genocide, in connection with Khmer Rouge policies and practices from 1975 to 1979. However, given their advanced age, it was far from certain that a second trial would ever be completed. Hun Sen’s public opposition to trials of other Khmer Rouge suspects made it unlikely that others responsible for the deaths of as many as 2 million people, would be held accountable. While the trial had initially generated considerable interest, the drawn-out proceedings over many years resulted in the Cambodian public showing little interest by the trial’s end.

The brutal suppression of garment and textile worker protests in January, and the subsequent prosecution of labor leaders and workers on trumped-up charges, did not deter some trade unions from continuing to protest for an increased minimum wage, demanding US$177 monthly, as suggested in a government task force report. Instead, the government on November 12 declared a minimum wage of $128.

The authorities introduced more burdensome procedures for union registration, and independent unions complained that their union registration was intentionally being delayed.  The government also moved toward passage of a revised law on trade unions that fell far short of international standards guaranteeing freedom of association.

Ongoing reports of employees fainting en masse in factories, prompted authorities to create a committee to investigate the causes. However, the general state of labor inspection and remedial action remained poor, although officials from the Ministry of Labor and Vocational Training  began conducting joint inspections of “low compliance” factories named in the Transparency Database launched by the International Labour Organization’s Better Factories Cambodia program.

China, Vietnam, Japan, and South Korea were Cambodia’s major foreign investors during the year, while Japan, the European Union and United States were the major foreign donors. China, Vietnam, and the US provided material military assistance and training to the Cambodian security forces, including units known to have recently been involved in serious human rights violations.

Positively, the US conspicuously refrained from endorsing the 2013 elections as free and fair, and repeatedly and publicly called on the authorities to respect human rights, especially to restore the rights to freedom of association and peaceful assembly. However, the US was virtually alone among foreign countries in seriously addressing Cambodia’s human rights crises, whether in public or private.

The World Bank, which suspended new lending to Cambodia in 2011 because the government had forcibly evicted people in a manner violating bank policy, began to consider resuming funding for government land projects, even though the government had not fully resolved the problem that had led to the suspension, or ceased and remedied reprisals against those who have advocated on these issues, among them activists sentenced to prison in November

In September, Cambodia agreed with Australia to accept an unknown number of refugees transferred from the island nation of Nauru. The Australian government will pay costs towards “resettling” the refugees, and also agreed to pay $35million in developmental assistance over four years towards electoral reform, de-mining, and rice-milling as part of the bilateral refugee agreement.