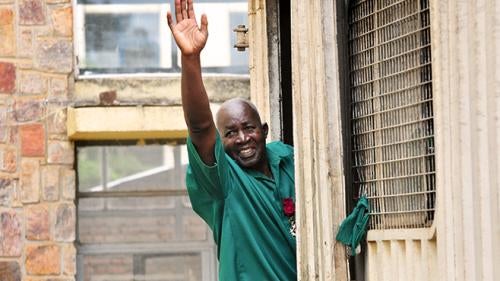 State repression against opponents and critics increased ahead of elections scheduled for 2015. The government repeatedly harassed opposition parties, civil society activists, and journalists, and blocked their activities. Members of the youth league of the ruling National Council for the Defense of Democracy-Forces for the Defense of Democracy (CNDD-FDD) used violence, and carried out abuses, against perceived opponents. Leading human rights activist Pierre Claver Mbonimpa was arrested and charged for remarks he made on the radio. On September 29, judges provisionally released him on grounds of ill-health.

The split of the opposition party UPRONA into two factions, in part due to alleged government interference in the choice of party leaders, triggered a political crisis and led to all three UPRONA ministers resigning. Draft constitutional amendments, which might have allowed President Pierre Nkurunziza to stand for a third term and altered the voting system in parliament, were defeated by just one vote in March.

Impunity for human rights abuses, particularly by state agents and youth of the ruling party, remains a concern. There was very little progress in investigating scores of extrajudicial killings between 2010 and 2012. The justice system suffers from a lack of independence and allegations of corruption.

The government persistently harassed civil society activists and blocked their activities, accusing them of being political opponents and interfering with the course of justice.

Pierre Claver Mbonimpa, president of the Association for the Protection of Human Rights and Detained Persons (APRODH), was arrested in the capital, Bujumbura, on May 15. He was charged with endangering internal and external state security and using false documents, in connection with allegations he made on Radio Publique Africaine (RPA) on May 6 that young Burundians were being given weapons and military uniforms and sent for military training in the Democratic Republic of Congo. The court in Bujumbura turned down his lawyers’ request for his provisional release three times, even after he became seriously ill and was hospitalized. On September 29, following the report of a court-ordered medical commission that listed several serious medical conditions, judges ordered Mbonimpa’s provisional release on grounds of ill-health. His case triggered widespread public reaction and numerous calls for his release inside and outside Burundi.

Following the adoption of a new law on public gatherings and demonstrations in December 2013, government officials repeatedly prohibited demonstrations and other activities by civil society organizations. The mayor of Bujumbura prohibited a peaceful march in support of Mbonimpa in June, claiming it had “an insurrectional character.” The minister of interior upheld his decision, telling the organizers they should let justice do its work instead of “distracting the public.”

Bujumbura’s mayor also prohibited a civil society demonstration planned for August 1 to call for an independent justice system. In July and September, police stopped Gabriel Rufyiri, president of the anti-corruption organization OLUCOME, from holding a one-person protest against illicit enrichment. Authorities also stopped civil society organizations from holding a march in April to mark the fifth anniversary of the murder of anti-corruption activist Ernest Manirumva.

As with civil society organizations, government officials threatened and harassed independent journalists, claiming they were mouthpieces of the political opposition. In July, the National Communications Council (CNC) banned radio stations from playing a song about Mbonimpa. In August, the CNC warned RPA to stop broadcasting interviews with people who claimed to have information backing up Mbonimpa’s allegations about military training of Burundians in Congo.

Following a legal challenge by the Union of Burundian Journalists (UBJ) regarding a restrictive press law adopted in 2013, the Constitutional Court ruled on January 7, 2014, that several articles of the press law did not comply with Burundi’s Constitution.  A parallel case by the UBJ challenging the law at the East African Court of Justice was pending at time of writing.

Restrictions on opposition parties increased as the CNDD-FDD tried to position itself for another victory in the 2015 elections. Government and ruling party officials blocked and interfered with the activities of opposition parties. Longstanding divisions in the opposition party UPRONA came to a head in early 2014, when the party broke into two factions, following alleged interference by government officials in the choice of party leaders. The government only recognized the faction headed by the new, CNDD-FDD-compliant leaders, leaving the other faction unable to operate legally.

Members of the youth league of the ruling party, known as Imbonerakure, carried out abuses against real or perceived opponents, including beatings, disruption of party meetings, and other acts of violence and intimidation. Youths of other parties sometimes retaliated, leading to violent clashes.

On March 8 and 9, 70 people, mostly members of the Movement for Solidarity and Democracy (MSD) opposition party, were arrested, many of them arbitrarily. Some were arrested in connection with alleged plans to hold an unauthorized demonstration, others following a clash between MSD members and the police, during which some MSD members took two policemen hostage.

All were tried together, on March 18, charged with rebellion, insults and acts of violence against law enforcement agents, grievous bodily harm and participation in an insurrectional movement. During the trial, which lasted just one day, neither the defendants nor their lawyers were able to prepare their defense properly, and little attempt was made to establish individual culpability. On March 21, a court in Bujumbura sentenced 21 defendants to life imprisonment, 10 defendants to 10 years in prison, and 14 defendants to five years in prison. It acquitted 22 defendants. A separate chamber for minors tried three defendants aged about 17 and sentenced them to two years in prison. Appeal hearings were delayed until the end of December. The government suspended the MSD for four months following its clash with police.

On June 27, a presidential decree ordered the release of several categories of prisoners, including those sentenced to five years’ imprisonment or less, pregnant women, prisoners suffering from incurable illnesses, those aged over 60, and those under 18. However, progress in releasing prisoners has been slow.

Most of the perpetrators of scores of extrajudicial killings and other acts of political violence between 2010 and 2012 continue to evade justice. An appeal hearing in the case of Deputy Police Commissioner Michel Nurweze, alias Rwembe (“razor blade” in Kirundi), was held on November 6 after being repeatedly delayed for more than a year. In a rare prosecution of an official for human rights abuses, a court in Gitega had tried Nurweze in 2013 on charges of murder, torture, and attempted murder. However, after at least two prosecution witnesses refused to testify due to a lack of adequate protection, he was acquitted for murder and torture but found guilty of grievous bodily harm and sentenced to three months’ imprisonment. He was released as he had already served a year in prison.

Three police officers accused of involvement in the killing of nine religious worshippers at Businde in March 2013 had not been tried at time of writing. They were arrested in 2013 and provisionally released after three months. There were further arrests of worshippers from the same informal spiritual movement who make monthly pilgrimages to Businde.

In May, Burundi adopted a law establishing a Truth and Reconciliation Commission to cover grave violations of human rights and international humanitarian law committed between 1962 and 2008. The commission had not been set up at time of writing. The law did not include any reference to the creation of a special tribunal or other judicial mechanism to try these crimes.

Mbonimpa’s arrest triggered widespread international reactions. Several governments and embassies, including those of the United States, the European Union, France, the United Kingdom, and Belgium, expressed concern, particularly after Mbonimpa’s hospitalization. In September, the European Parliament passed a resolution calling for his immediate and unconditional release and expressing concern about other human rights abuses in Burundi. On September 23, US President Barack Obama said he stood in solidarity with Mbonimpa and called for his release.

The mandate of the United Nations Office in Burundi, BNUB, was due to end on December 31, 2014, despite the worsening human rights situation ahead of the 2015 elections. At time of writing, plans were underway to set up by January 2015 a human rights presence in Burundi under the Office of the UN High Commissioner for Human Rights, as recommended by the UN Joint Transition Plan, presented to the government on May 16.

The UN Security Council also requested that the secretary-general establish an electoral observer mission to monitor and report before, during, and after the elections in response to a request from the Burundian government. In April, the government expelled BNUB’s security advisor to protest a leaked UN confidential cable containing allegations that military officers had distributed weapons and military and police uniforms to the Imbonerakure.

On November 25, following a visit to the country, the UN special rapporteur on the situation of human rights defenders, Michel Forst, condemned as unacceptable the “escalation of the harassment of defenders” and criticized attempts to restrict the work of civil society actors by equating them with political opponents.