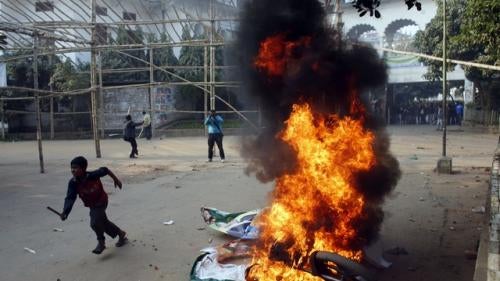 Prime Minister Sheikh Hasina’s Awami League party and its allies swept to power in the January national elections after key opposition parties refused to participate. The opposition demanded polls under a neutral caretaker government and all attempts at negotiations, including by the United Nations, failed to resolve the stalemate. Hundreds were killed and injured in violent attacks surrounding the elections.

Security forces carried out abductions, killings, and arbitrary arrests, particularly targeting opposition leaders and supporters. In a positive development, after years of impunity for the security forces, several members of the notorious Rapid Action Battalion (RAB) were arrested following the abduction and apparent contract killings of seven people in May.

Compensation and relief for victims and survivors of the April 2013 collapse of the Rana Plaza in Dhaka was slow because international companies that sourced garments from the five factories operating in the building failed to contribute enough to the financial trust fund set up to support survivors and the families of those who died. After the accident, the government amended its labor laws to make it easier for workers to form unions. However, workers reported tremendous pressure from owners and managers not to do so.

Hundreds were killed and injured in violent attacks surrounding the controversial January elections. Both Bangladesh’s ruling party, as well as opposition parties, were responsible for the violence.

Supporters of the opposition Bangladesh Nationalist Party and the Jamaat-e-Islami party threw petrol bombs to enforce strikes and economic blockades. Before and after the election, attackers also vandalized homes and shops owned by members of Bangladesh’s Hindu and Christian communities.

In response, the government cracked down on opposition members, naming hundreds of them as suspects in violent attacks. Members of law enforcement agencies carried out extrajudicial executions, enforced disappearances, arbitrary arrests, and unlawful destruction of private property.

The government introduced several measures aimed at cracking down on critics, continuing a trend from the previous year.

In August, the government published a new media policy for all audio, video, and audio-visual content transmitted through any means which contains overly broad language aimed at significantly curtailing critical reporting. Several television and news outlets that were shut down in 2013 for critical reporting remained closed through 2014.

Although the government claims that almost 2,000 RAB members have been punished for various misdemeanors since the group’s inception, there was not a single prosecution for extrajudicial executions, torture, or arbitrary arrests before the Narayanganj incident. Independent organizations estimate that the RAB has been responsible for approximately 800 unlawful killings over the past 10 years. Allegations of violations by members of the police and other law enforcement agencies, including the Border Guard Bangladesh, were not independently investigated or prosecuted.

April marked one year since the collapse of the Rana Plaza building, in which over 1,100 garment workers died and an estimated 2,500 were injured. Six months prior, a deadly factory fire at Tazreen Fashions killed at least 112 people. Survivors and relatives reported that they continue to suffer from life-changing injuries, psychological trauma, and lost income.

After the Rana Plaza accident, a compensation fund set up through the International Labour Organization (ILO) was designed to raise US$40 million. But one year later, only $15 million had been raised, with most funds coming from just one company.

After the Rana Plaza tragedy, the Bangladesh government and Western retailers set up an inspection regime for more than 3,500 garment factories to ensure structural integrity and fire and electrical safety. A group of North American retailers inspected about 587 factories. A second body, formed by mainly European retailers, inspected 1,545 factories.

While they published details of their inspections, at time of writing, the government had not published information on the remaining inspections it had conducted. The government amended its labor laws to make it easier for workers to form and join unions. However, workers said they continued to face tremendous pressure—including intimidation, mistreatment, and even death threats from managers—not to do so.

Workers in the tanneries of Hazaribagh, a residential area in Dhaka, continue to suffer from highly toxic and dangerous working conditions. Although some tanneries have begun to build new premises at a dedicated industrial zone in Savar, their planned relocation continued to be delayed. Residents of nearby slums complain of illnesses caused by the extreme tannery pollution of air, water, and soil. The government continues its de facto policy of not enforcing labor and environmental laws with respect to the Hazaribagh tanneries.

Bangladeshi migrant workers, especially in the construction and domestic service sectors in the Gulf, are often deceived by recruiters about their contracts and charged excessive fees that leave them deeply in debt and vulnerable to abuse abroad, including passport confiscation, unpaid wages, hazardous work, and forced labor. Migrants rarely receive effective assistance from their embassies.

Trials against those accused of genocide, crimes against humanity, and war crimes committed during the country’s 1971 war of independence continued in spite of serious ongoing concerns about deep flaws in the trials. The prosecution in the trials urged the law minister to amend the tribunal’s statute to allow it to prosecute the entire Jamaat-e-Islaami party, which had opposed the movement for secession from Pakistan, and the issue is still pending before the judges.

In November, the appellate division of the Supreme Court confirmed the death penalty in the war crimes case against Muhamed Kamaruzzaman, despite serious fair trial concerns.

Child marriage in Bangladesh remains extremely prevalent. In July 2014, Prime Minister Sheik Hasina pledged at the London Girl Summit to reform the law on child marriage, end child marriage under age 15 by 2021, and end child marriage completely by 2041. However, proposals from her cabinet in October to lower the age of marriage for girls from 18 to 16 undermined her call.

Bangladesh’s personal status laws governing marriage, separation, and divorce overtly discriminate against women, and the government showed no sign of willingness to undertake a comprehensive review to ensure equality and protection for women and girls.

Several children were injured during election violence due to indiscriminate petrol bombings and other attacks by opposition supporters. In some cases, opposition groups also recruited children to carry out the attacks. Although members of opposition parties were arrested and charged with violence, the government continued to fail to take action against them for deliberately putting children in harm’s way as part of their campaign of protests.

Bangladesh continues to implement the death penalty. Abdul Qader Mollah, a leader of the Jamaat-e-Islami party, was hanged in December 2013 after a final verdict found him guilty of war crimes and crimes against humanity during the 1971 war for independence.

Several countries condemned the attacks surrounding the polls, which were the most violent since the country’s independence. The international community attempted to facilitate a negotiated settlement to prevent the one-sided national elections in January. However, countries including the United States and India, that have some influence in Bangladesh, were unable to press for an agreement. Efforts by the UN to mediate also failed.

Several countries including the US and United Kingdom expressed concern about violations by security forces. However, they failed to call for the RAB to be disbanded. The US continued to engage with the RAB on establishing internal discipline mechanisms.

Both the US and the European Union, Bangladesh’s two largest overseas markets for garments, called on the government and garments industry to implement global labor standards. The US continued to suspend Bangladesh’s trade benefits under the Generalized System of Preferences (GSP). In July 2013, the EU warned that Bangladesh might lose its duty-free and quota-free access if it did not improve its record on labor rights and workplace safety, but did not take any further steps.

The United Nations High Commissioner for Refugees (UNHCR) and other humanitarian organizations working with the Rohingya refugees at the Burmese border continued to face pressure from the government and limited access to the camps.