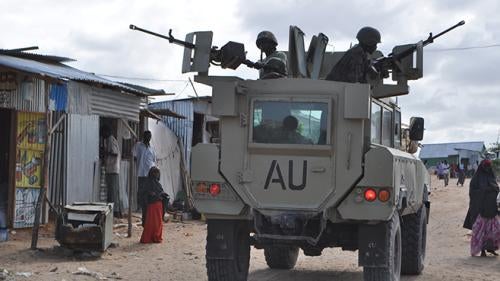 The Islamist armed group Al-Shabaab abandoned several towns after a joint military offensive by the African Union Mission to Somalia (AMISOM) and the Somali National Armed Forces in 2014. However, Al-Shabaab maintains control of large areas of south-central Somalia, where it administers public executions and beatings and restricts basic rights. Al-Shabaab carried out deadly attacks in government-controlled areas such as Mogadishu, targeting civilians, including lawmakers and other officials.

The Somali government largely failed to provide security and protect rights in areas under its control. Ongoing insecurity in government-controlled areas, including Mogadishu, and political infighting and reshuffles detracted from progress on justice and security sector reform. Political efforts to establish federal states fuelled inter-clan fighting in some areas.

Civilians have been caught up in fighting between government forces and Al-Shabaab, skirmishes between government forces over control of checkpoints, and in inter-clan fighting over land and over the haphazard and politicized creation of federal states. They have become casualties of indiscriminate attacks by government forces in their heavy-handed responses to public protests and rebel attacks. On December 13, 2013, government soldiers shot dead Duduble clan elder Suldan Abdinaser Hussein Hassan at a checkpoint in Lower Shabelle; the country’s military court issued warrants for the soldiers, but they were never apprehended, reportedly due to their commanders’ protection.

The Somali government continued to rely on its military court to administer justice for a broad range of crimes not within its jurisdiction in proceedings that fall short of international fair trial standards. The court in 2014 sentenced to death and executed 15 people, 13 of whom were not members of the Somali armed forces.

Abuses by Al-Shabaab
Credible reports indicate that Al-Shabaab continues to carry out targeted killings, including beheadings and civilian executions. On June 2, the group publicly executed three men accused of spying for the federal government and foreign governments in the port-town of Barawe. Al-Shabaab also administers arbitrary justice and severely restricts basic rights.

Al-Shabaab regularly targeted for attack civilians and civilian objects, particularly in Mogadishu with a significant increase during the Ramadan holiday. On February 13, a suicide car bomb attack on a United Nations convoy near Mogadishu International Airport killed at least six civilian bystanders. Al-Shabaab claimed responsibility for the killings of three lawmakers in July and August.

Sexual Violence
While the full scope of sexual violence in Somalia remains unknown due to underreporting and absence of data, it is clear that internally displaced women and girls are particularly vulnerable to rape by armed men, including Somali government soldiers and militia members. Government forces and allied militia have also taken advantage of insecurity in newly recovered towns to rape local women and girls. The government endorsed an action plan to address sexual violence, but implementation was slow.

Some soldiers from Uganda and Burundi deployed as part of the African Union Mission in Somalia sexually exploited and assaulted women and girls on their bases in Mogadishu. In some cases women and girls were offered humanitarian assistance, medicine, and food in exchange for sex. Few women filed complaints due to a fear of reprisals and an absence of effective and safe complaints mechanisms. At time of writing, the AU and troop contributing countries were investigating allegations of sexual abuse and exploitation by AMISOM forces. Thus far, accountability for these abuses has been limited despite AMISOM commitments.

Recruitment of Children and Other Abuses
Al-Shabaab in particular targets children for recruitment and forced marriage, and attacks schools. The UN documented recruitment and use of children by government forces and allied militia.

In August, the UN expert on children in armed conflict raised concerns about the unlawful detention of 55 children, reportedly formerly associated with armed groups, in the Serendi rehabilitation camp in Mogadishu.

Government authorities committed to implement action plans signed in 2012 to end the use of child soldiers, as well as the killing and maiming of children, but progress has been slow.

According to the UN, over 1 million people, many of them displaced persons, face acute food insecurity and 120,000 Somalis have been newly displaced since the beginning of 2014, as a result of ongoing military operations.

Tens of thousands of displaced people remain in dire conditions in Mogadishu and are subjected to evictions, sexual violence, and clan-based discrimination at the hands of government forces, allied militia, and private individuals including camp managers. Government plans to relocate displaced communities to the outskirts of Mogadishu stalled, but forced evictions by private individuals and the authorities increased in July and August.

Al-Shabaab used its control of supply routes to impose blockades around Hudur, Bulo-Burte, Elbur and Qoryoley and other towns taken over by AMISOM and Somali government forces, severely restricting the movement of goods, assistance, and people—including by attacking civilian vehicles.

Somalia remains one of the most dangerous countries in the world to be a journalist; three media professionals, including two journalists, were killed in 2014. On June 21, Yusuf Ahmed Abukar—a reporter working with Mustaqbal, a privately owned radio station, and Ergo radio, which covers humanitarian affairs—was killed when a bomb exploded in his car. Impunity for these types of killings prevails.

Government harassment and intimidation of journalists in Mogadishu, particularly by NISA, and threats against media outlets increased. On February 11, NISA detained Mohamed Haji Bare from Radio Danan and Ibrahim Mohamed from Radio Haatuf, for three days, beating them severely and threatening them, reportedly for taking photos of a deputy governor previously injured in a car bomb.

On August 15, following two controversial broadcasts, including one criticizing the president’s claims of widespread support for Al-Shabaab in the independent media, NISA raided Radio Shabelle and Sky FM and arrested 19 journalists and media workers. Sixteen were subsequently released, but the stations’ leadership were reportedly charged with inciting violence. Several journalists complained of mistreatment during interrogations.

In Somaliland, the authorities harassed popular newspapers. On June 25, a regional court in Hargeisa charged and sentenced Yusuf Abdi Gabobe, chairman of the Haatuf Media Network, and Ahmed Ali, chief editor of the network, to three years and fours years in prison respectively for libel, false publication, and anti-state propaganda. They were later released following a presidential pardon. The Hatuuf license was revoked reportedly as a result of a series of reports on corruption in the Ministry of Energy.

Key International and Regional Actors
Foreign and regional partners prioritized financial assistance to AMISOM for the military offensives against Al-Shabaab and to mentor and train the Somali armed forces. On January 22, 4,395 Ethiopian troops formally merged with AMISOM, joining troops from Burundi, Uganda, Sierra Leone, Djibouti, and Kenya to bring the force’s strength to 22,126 troops. Support to the Somali government has focused on building the security apparatus, resulting in a proliferation of new security entities, and integration of militias.

In January, the United States said it had deployed a number of military advisors to assist AMISOM and Somali security forces. The US Defense Department claimed responsibility for a September 1 airstrike that killed Al-Shabaab’s leader, Ahmed Abdi Godane.

Much of the international and regional community focus, including that of the UN and European Union, has centered on the implementation of a federalist form of government. At time of writing, international support for the country’s development agenda was strained by infighting between the Somali president and prime minister.

In addition to their large military presence in Somalia, Kenya and Ethiopia trained and provided military support to government-affiliated militia. Both focused on the status of border areas and have been involved in negotiations over the creation of new federal states in these areas.

Host countries of Somali refugees, including Kenya and several European countries, used alleged improvements in security in Mogadishu as grounds for returning Somalis, including asylum seekers and refugees, to Somalia, despite volatility on the ground and  continued risk of persecution and serious harm from generalized violence.

Between April and mid-May, Kenya deported 359 Somalis, including registered refugees, to Mogadishu without access to the UN refugee agency, in violation of its international obligations. Saudi Arabia also deported 33,605 Somalis between December 2013 and May 2014 without giving them the opportunity to file protection claims.