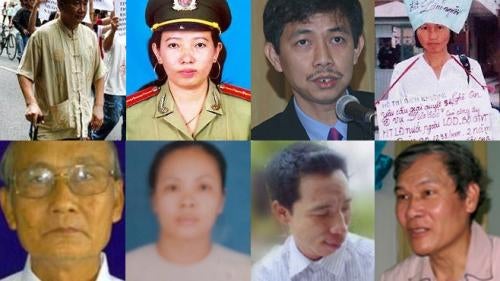 The human rights situation in Vietnam remained critical in 2014. The Communist Party of Vietnam (CPV) continued its one-party rule, in place since 1975. Maintaining its monopoly on state power, it faced growing public discontent with the lack of basic freedoms. While fewer bloggers and activists were arrested than in 2013, the security forces increased various forms of harassment and intimidation of critics.

Denial of rights and endemic official corruption are widely seen as stifling Vietnam’s political and economic progress. The growth of critical discourse on blogs, Facebook, and other forms of social media has challenged the government’s ability to dominate public opinion. Anti-China sentiment has continued to grow as the maritime dispute between Vietnam and China has intensified. In May 2014, violent protests against China erupted in Binh Duong and Ha Tinh provinces, causing the death of four Chinese nationals and the destruction of facilities of many foreign-owned companies, including Chinese, Taiwanese, South Korean, and Japanese businesses.

Vietnam accepted 182 of the 227 recommendations made by the United Nations Human Rights Council (HRC) at its June 2014 periodic review of Vietnam’s human rights record, but rejected crucial recommendations such as release of political prisoners and people detained without charge or trial, legal reform to end politically motivated imprisonment of people for their peaceful exercise of fundamental human rights, the creation of an independent national human rights institution, and other steps to promote public political participation. In November, the National Assembly ratified the UN Convention against Torture and the Convention on the Rights of Persons with Disabilities (CRPD).

Political Prisoners and Misuse of the Criminal Justice System

Vietnamese courts lack independence and continue to be used as political tools of the CPV against critics. Trials are often marred by procedural and other irregularities to achieve a politically pre-determined outcome. For example, during the September 2014 trial of land rights activists from Duong Noi ward (Hanoi) charged with “fighting against those on public duty,” the court refused to summon witnesses who might have provided statements in favor of the accused and prevented defense lawyer Tran Thu Nam from presenting his defense.

Authorities use penal code provisions on “undermining national unity” and “abusing the rights to democracy and freedom to infringe upon the interests of the state” to crack down on dissent, though other laws such as disrupting public order are also used.

In February 2014, activists Bui Thi Minh Hang, Nguyen Thi Thuy Quynh, and Nguyen Van Minh were arrested on their way to visit fellow activist Nguyen Bac Truyen on trumped up charges of causing traffic jams. The three were convicted in August 2014 for causing public disorder under article 245 of the penal code and received sentences of between two and three years in prison.

In May, the authorities arrested prominent blogger Nguyen Huu Vinh (often known as Anh Ba Sam) and his colleague Nguyen Thi Minh Thuy, also for allegedly violating article 258. In total, at least 10 people were convicted under article 258 in 2014.

Physical assaults against rights campaigners are common. In February 2014, anonymous thugs assaulted and beat Huynh Ngoc Tuan and his son, Huynh Trong Hieu, both of whom write blogs, in Quang Nam province. Two months earlier, Huynh Ngoc Tuan had suffered broken bones in another assault that occurred while he was campaigning for former political prisoners.

In May thugs assaulted rights activist Tran Thi Thuy Nga, breaking her leg and arm. In August, blogger Nguyen Bac Truyen was hit by a motorbike driven by two anonymous men who had been keeping intrusive surveillance on him and his family for months prior to the accident. In November, thugs assaulted and injured former political prisoner and blogger Truong Minh Duc. Other bloggers and activists who were assaulted by anonymous thugs include Le Quoc Quyet, Le Thi Phuong Anh, Nguyen Van Thanh, Trinh Anh Tuan, Truong Van Dung, Tran Ngoc Anh, Bui Tuan Lam, Pham Ba Hai, and Le Van Soc. No one was charged in any of these cases.

In April 2014, the police of Nha Trang city forcibly dispersed a human rights meeting organized by prominent blogger Nguyen Ngoc Nhu Quynh (also known as Mother Mushroom) and other activists. In July 2014, the Independent Journalists Association of Vietnam (IJAVN) was established. In August and September, police summoned members of the IJAVN— including founder Pham Chi Dung and freelance journalist Nguyen Thien Nhan—for questioning about their writing.

Domestic restriction of movement is used to prevent bloggers and activists from participating in public events, such as anti-China protests, human rights discussions, or attending trials of fellow activists. For example, writer Pham Dinh Trong was detained briefly twice in 2014 so he could not participate in an anti-China protest in Ho Chi Minh City in May or attend blogger Bui Thi Minh Hang’s trial in August.

The government has also prevented many critics from making trips outside Vietnam, citing “national security.” In February 2014, freelance journalist Pham Chi Dung was prohibited from leaving Vietnam to attend Vietnam’s Universal Periodic Review session in Geneva. Other bloggers and activists who have been stopped from leaving Vietnam include Nguyen Thi Huyen Trang and Nguyen Thanh Thuy (in April), and Pham Dac Dat (in July).

The government monitors, harasses, and sometimes violently cracks down on religious groups that operate outside official, government-registered, and government-controlled religious institutions. Targets in 2014 included unrecognized branches of the Cao Dai church, the Hoa Hao Buddhist church, independent Protestant and Catholic house churches in the central highlands and elsewhere, Khmer Krom Buddhist temples, and the Unified Buddhist Church of Vietnam. At least 20 people were convicted in the first nine months of 2014 for participating in independent religious groups not approved by the government.

In July, while Professor Heiner Bielefeldt, UN special rapporteur on freedom of religion or belief, was visiting Vietnam on an official mission, police intimidated and put many dissidents and religious activists under house arrest so they could not meet him. Fearing for the safety of activists, Bielefeldt cut short his planned visits to An Giang, Gia Lai, and Kon Tum provinces.

Police brutality, including deaths in police custody, are an increasing source of public concern in Vietnam. In 2014, even the heavily controlled state media frequently published reports about police abuse. In many cases, those killed in police custody were being held for minor infractions. Police frequently engaged in cover-ups, including by alleging the detainee’s suicide. Many detainees said they were beaten to extract confessions, sometimes for crimes they say they did not commit. Others said they were beaten for criticizing police officers or trying to reason with them. Victims of beatings included children.

People dependent on drugs, including children, continue to be held in government detention centers where they are forced to perform menial work in the name of “labor therapy.” Violations of center rules and failure to meet work quotas are punished by beatings and confinement to disciplinary rooms where detainees claim they are deprived of food and water. In 2014, the government developed a plan to “reform” the system that would not do away with forced labor and, despite promises to close some centers and reduce the overall number of detainees, would still leave more than 10,000 detainees in the system in 2020.

Vietnam’s most important foreign relations are with China and the United States, but ties to Japan, the European Union, the Association of Southeast Asian Nations, and Australia are also significant.

Vietnam’s relationship with China was complicated in 2014 by maritime territorial disputes, which led to large street protests and violent riots in Vietnam.

In the context of its “Asia pivot” aimed at containing China, the US pursued improved military and economic relations with Vietnam while making efforts to press Vietnam to improve its human rights record, delivering mixed messages. Japan, the EU, and Australia, focusing on commercial relations, made inadequate efforts to support detained activists or otherwise advocate for improved respect for basic rights in Vietnam.