(Jakarta) - People with psychosocial disabilities in Indonesia are often shackled or forced into institutions where they face abuse, Human Rights Watch said in a report released today.

The 74-page report, “Living in Hell: Abuses against People with Psychosocial Disabilities in Indonesia” examines how people with mental health conditions often end up chained or locked up in overcrowded and unsanitary institutions, without their consent, due to stigma and the absence of adequate community-based support services or mental health care. In institutions, they face physical and sexual violence, involuntary treatment including electroshock therapy, seclusion, restraint and forced contraception.

“Shackling people with mental health conditions is illegal in Indonesia and yet it remains a widespread and brutal practice,” said Kriti Sharma, disability rights researcher at Human Rights Watch and author of the report. “People spend years locked up in chains, wooden stocks, or goat sheds because families don’t know what else to do and the government doesn’t do a good job of offering humane alternatives.” 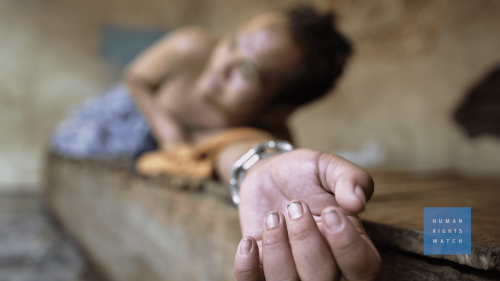 Human Rights Watch interviewed 72 people with psychosocial disabilities, including children, as well as 10 family members, caregivers, mental health professionals, heads of institutions, government officials, and disability rights advocates. Human Rights Watch visited 16 institutions across the islands of Java and Sumatra including mental hospitals, social care institutions, and faith healing centers, and documented 175 cases across five provinces of people who are currently shackled or locked up or were recently released.

More than 57,000 people in Indonesia with mental health conditions have been subjected to pasung – shackled or locked up in confined space – at least once in their lives, with about 18,800 currently shackled, based on latest available government figures. Despite a 1977 government ban on the practice, families, traditional healers, and staff in institutions, continue to shackle people with psychosocial disabilities, sometimes for years at a time.

In one case, the father of a woman with a psychosocial disability told Human Rights Watch that he locked her in a room after consulting faith healers because she was destroying the neighbors’ crops. When she tried to dig her way out of the room, her parents tied her hands behind her back. She stayed naked in the rubble, eating, sleeping, urinating, and defecating in the room for 15 years before they released her.

The Indonesian government has taken some steps to do away with the practice. The Health and Social Affairs ministries each have started an anti-shackling campaign. A new mental health law requires integrating mental health care with primary health care. And teams of government officials, medical personnel, and staff in government institutions are tasked with freeing people from shackling. However, partly because Indonesia’s government is so decentralized, implementation at the local level has been very slow.

A country of 250 million people, Indonesia has only 600 to 800 psychiatrists—one for every 300,000 to 400,000 people—and  48 mental hospitals, more than half in just 4 of Indonesia’s 34 provinces. Government data shows that the 2015 health budget is 1.5 percent of the total and that 90 percent of those who may want access to mental health services cannot due to a paucity of services. The government aims to have universal health coverage, including mental health care, by 2019.

The few facilities and services that do exist often do not respect the basic rights of people with psychosocial disabilities and greatly contribute to the abuses against them, Human Rights Watch found. “Imagine living in hell, it’s like that here,” Asmirah, a 22-year-old woman with a psychosocial disability said about the religious healing center in Brebes she was forced to live in.

In some of the facilities, overcrowding and lack of hygiene were a serious concern, leading to widespread lice and scabies. In Panti Laras 2, a social care institution on the outskirts of Jakarta, the capital, Human Rights Watch observed approximately 90 women living in a room that could reasonably accommodate no more than 30.

“In many of these institutions, the level of personal hygiene is atrocious because people are simply not allowed to get out or bathe,” Sharma said. “People are routinely forced to sleep, eat, urinate and defecate in the same space.”

In 13 of the 16 institutions that Human Rights Watch visited, people were routinely forced to take medication or subjected to alternative “treatments” such as concoctions of “magical” herbs, vigorous massages by traditional healers, and Quranic recitation in the person’s ear. In three out of the six mental hospitals visited, Human Rights Watch documented the use of electroconvulsive therapy without anesthesia and without consent. In one, it was also administered to children.

Human Rights Watch documented cases of physical and sexual violence. In seven of the institutions visited, male staff could enter women’s sections at will or were responsible for the women’s section, putting women and girls at increased risk of sexual violence. In healing centers, men and women were chained next to each other, leaving women no option to run away if abused. In three institutions, Human Rights Watch found evidence of staff giving women contraception without their consent or knowledge.

The Indonesian government should immediately order inspections and regular monitoring of all government and private institutions and take action against facilities that practice shackling or abuse people with psychosocial disabilities. Indonesia should also take steps to ensure that people with psychosocial disabilities can make decisions about their lives and to require informed consent for treatment. 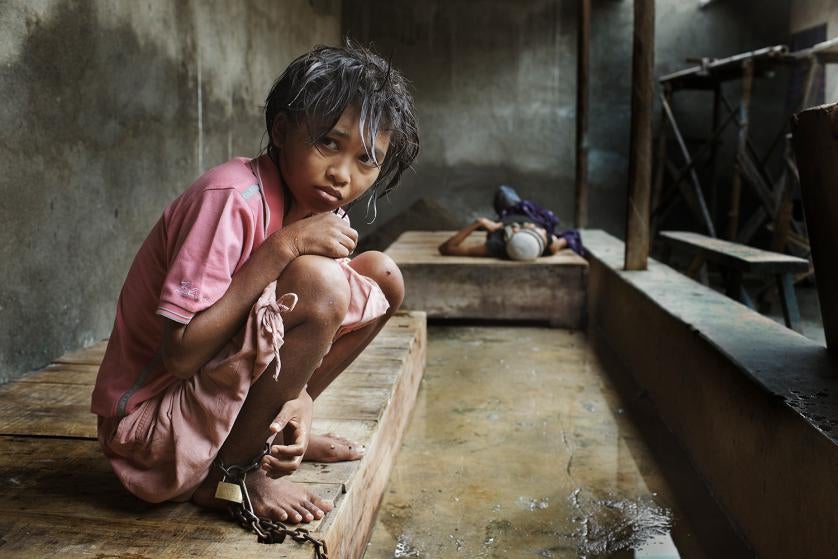 The government should develop voluntary and accessible community-based support and mental health services in consultation with people with psychosocial disabilities themselves as well as train mental health workers, from nurses to psychiatrists, Human Rights Watch said.

“The thought that someone has been living in their own excrement and urine for 15 years in a locked room, isolated, and not given any care whatsoever is just horrifying,” Sharma said. “So many people told me ‘This is like living in hell.’ It really is.”