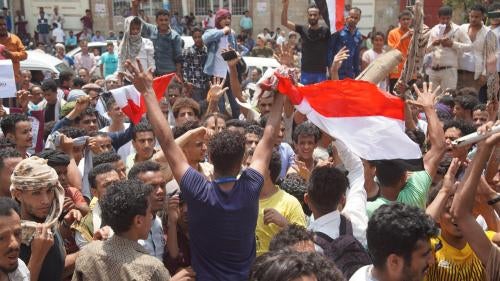 As the conflict in Yemen enters its seventh year, the United Nations Office for the Coordination of Humanitarian Affairs (OCHA) estimates that it has caused the deaths of nearly a quarter of a million people. Millions of Yemenis continue to face the largest humanitarian crisis in the world, with more than half the population facing acute levels of food insecurity. Yemen depends on imports of almost all its food and essential commodities, and the collapse of its currency has led to skyrocketing food and other commodity prices and reduced households’ purchasing power. Millions of people cannot afford to meet their basic needs.

The conflict intensified in 2021 with 49 districts in Yemen directly affected by active front lines, up from 35 at the start of 2020. Marib governorate was the site of heavy fighting between Yemeni government forces and the Houthi armed group. Over 4 million people are internally displaced due to the conflict. The Covid-19 pandemic worsened the humanitarian crisis.

Civilians across the country suffered from worsening economic conditions and lack of basic services. Southern Yemen witnessed protests over deteriorating economic conditions and basic services. Torrential rains and flooding in May 2021 killed scores of people and damaged homes and infrastructure across the country. The UN Group of Eminent International and Regional Experts (GEE) on Yemen and other rights groups documented how parties to the conflict continue to commit serious violations of international human rights law and international humanitarian law, including violations that likely amount to war crimes. Nevertheless, under heavy pressure from Saudi Arabia and the United Arab Emirates, the UN Human Rights Council narrowly voted in October 2021 to end the mandate of the UN Group of Eminent Experts, shuttering the only international, independent body investigating abuses by all parties to the conflict in Yemen.

Houthi authorities in 2021 continued to block UN experts from securing the Safer oil tanker off the coast of Hodeida, leaving Yemen at risk of an environmental disaster if the ship’s 1.1 million barrels of oil leak into the Red Sea.

In late 2021 Yemen experienced a third wave of Covid-19 infections. As of August 2021, confirmed cases of Covid-19 had reached 8,265, with 3,252 associated deaths according to the World Health Organization, but the true numbers are likely much higher. The Covid-19 Vaccines Global Access Program (COVAX) promised 4.2 million vaccine doses to Yemen but by the middle of 2021 had only delivered 511,000 according to Oxfam. By late September 2021, authorities across the country had administered only 322,934 Covid-19 vaccine doses.

In June 2021, Human Rights Watch reported that Houthi authorities have suppressed information about the dangers and impact of Covid-19 and undermined international efforts to provide vaccines in areas under their control. Health workers in Houthi-controlled areas in Yemen said that they faced significant barriers to obtaining vaccines imposed by Houthi authorities, subjecting them to unnecessary risk, and further damaging the country’s healthcare system.

The Civilian Impact Monitoring Project, a monitoring mechanism under the United Nations Protection Cluster for Yemen, reported that 2,087 civilians were killed in armed violence in 2020. In September, the Yemeni human rights group Mwatana and Global Rights Compliance concluded that conduct by the coalition and Houthis severely impeded civilians’ access to food and water, effectively using starvation as a weapon of war, in violation of international humanitarian law.

Throughout the conflict, the Saudi and UAE-led coalition and the Houthis have committed unlawful attacks against civilian objects, such as residential homes, hospitals, and schools.

More than half the 20.7 million Yemenis in dire need of humanitarian assistance or protection are children. In 2021, Save the Children reported that between 2018 and 2020 a quarter of all civilian casualties were children. More than 1.5 million of Yemen’s 4 million displaced people are children, and hundreds of thousands of children have become migrants or sought asylum abroad.

UNICEF and other groups warned in 2021 that children were facing the highest levels of severe acute malnutrition recorded in Yemen since the escalation of the conflict in 2015, with 2.3 million children acutely malnourished and nearly 400,000 children under five at imminent risk of death.

UNICEF stated in August that 2 million children were out of school and that one in six schools could no longer be used due to war damage. Parties to the conflict continued to utilize schools for military purposes. The UN Group of Eminent International and Regional Experts on Yemen reported in 2021 that the Houthis, the Saudi and UAE-led coalition, and the Yemeni government had​​ recruited children, used children in hostilities, and detained children.

UN Secretary-General Antonio Guterres for the second consecutive year failed to include the Saudi and UAE-led coalition from his “list of shame” of parties responsible for grave violations against children during conflict, despite attacks that killed and maimed children.

According to the Civilian Impact Monitoring Project, landmines and unexploded ordnance (UXO) have caused approximately 9,000 civilian casualties since the beginning of the conflict and 284 civilian casualties in 2020, including 55 children. Houthi forces have used antipersonnel landmines in violation of the 1997 Mine Ban Treaty, to which Yemen is a party.

The GEE in 2021 reported that Houthi forces have used anti-personnel landmines, which may amount to war crimes. Houthi forces’ use of mines against objects critical for survival has exacerbated the humanitarian crisis and caused the starvation of civilians, an investigation by Mwatana showed.

Investigations by Human Rights Watch and other rights groups produced mounting evidence of widespread arbitrary detention, forced disappearances, and ill-treatment and torture in detention by parties to the conflict.

On September 18, Houthi forces executed a group of 9 people, reportedly including a 17 year old, in Sana’a’s Tahrir Square. They had been accused of facilitating an airstrike that killed a Houthi leader in 2018. The UN high commissioner for human rights said in September 2021 that “​​the defendants were sentenced to death in a judicial process that violated their constitutional rights and did not comply with fair trial standards under international law.”

A 2021 report by Mwatana stated that Houthi forces, Yemeni government-backed forces, and UAE-backed forces tortured to death detainees in secret prisons they have controlled since the start of the conflict.

Human Rights Watch reported in 2021 that the UAE-backed Southern Transitional Council (STC) forces arbitrarily detained and tortured a journalist apparently for his critical reporting. The Saudi/UAE-led coalition, the Yemeni government, the STC, and the Houthi forces continued to commit egregious violations of international humanitarian law and international human rights law, including indiscriminate attacks against civilians, forced disappearances and torture, according to a 2021 UN report.

In late 2020, Human Rights Watch documented severe restrictions by the Houthi authorities, the Yemeni government and affiliated forces, and the UAE-backed STC on the delivery of desperately needed humanitarian aid. While aid funds are also in short supply, Human Rights Watch found that the obstruction of aid is exacerbating the country’s dire humanitarian situation and weakening its response to the Covid-19 pandemic.

The Saudi and UAE-led coalition has forced Sana’a International Airport to remain closed since August 2016, which has severely restricted the flow of food, fuel, and medicine to civilians, in violation of international humanitarian law. In March 2021, Saudi Arabia announced a peace initiative that included the potential reopening of the airport, but it remained shuttered as of October 2021.

In February, Houthi authorities arrested a Yemeni model and two other women and subjected them to an unfair trial for allegedly committing an indecent act and drug possession. In November, Houthi-controlled court in Sana’a sentenced the model to five years in prison. In September, the UN Group of Experts reported widespread gender-based violence and sexual violence by the Houthi forces and the UAE-backed forces.

In April, the UN OCHA reported that Yemeni women faced restrictions on movement in Al-Hudaydah and Hajjah, areas under Houthi control, where authorities required them to be accompanied by a mahram (male relative) in order to travel. In 2019, local media reported that Houthi authorities issued directives to local transportation bus companies requiring that women be escorted by a mahram when traveling between cities in Yemen. Women also reported to local media that bus drivers have refused to take them because they do not have a mahram, or that it cost them more money to travel since they must pay for the mahram’s ticket. Women are also not allowed to stay in hotels except with a mahram, particularly cities like Aden and Taiz. In addition, authorities continued to require woman to show guardianship permission and have their guardian present—a father, brother, husband, or son—to obtain or renew personal identity cards or passports, despite the law not requiring such conditions.  Women’s lack of access to legal documentation restricted their ability to travel abroad.

Reproductive health services were limited or nonexistent for the five million Yemeni women and adolescent girls of child-bearing age. The UN Fund for Population (UNFPA) reported in September 2021 that in Yemen one woman dies every two hours during childbirth. UNFPA reported that child marriage is increasing as a coping mechanism by impoverished families as the conflict continues. There is no minimum age for marriage in Yemen.

Articles 273 and 274 punish any act “indicating a breach of modesty and contrary to etiquette” with up to six months in prison.

Scores of African migrants died at a detention center in Sana’a in March 2021 after Houthi security forces launched unidentified projectiles into the center, causing a fire. The GEE reported in September that Houthi authorities had arrested 11 Houthi soldiers in connection with this incident.

The International Organization on Migration (IOM) reported in July 2021 that thousands of migrants were estimated to be stranded across the country, with many held in inhumane conditions without adequate access to basic services and food.

Despite years of documentation of unlawful attacks, the United States, the United Kingdom, France, Canada, Spain, Germany, Australia, and other countries continued to license the sale of weapons and military equipment to Saudi Arabia, the UAE, and other coalition members. Iran continued to support Houthi forces militarily. Italy blocked arms sales to Saudi Arabia and the UAE in January 2021 over concerns that weapons could be used against civilians, but later eased restrictions amid diplomatic tensions.

The GEE, the UN panel of experts on Yemen, and other rights groups reiterated their call for countries to address the lack of accountability for serious crimes, including probable war crimes, committed in Yemen. Under pressure from Saudi Arabia and the UAE, members of the UN Human Rights Council narrowly voted to end the GEE’s mandate in October. More than three dozen states at the UN General Assembly subsequently called for the international community to “actively explore further alternative mechanisms to monitor the human rights situation in Yemen and ensure accountability.”

In 2021, the US appointed a new special envoy for Yemen, Timothy Lenderking. The new UN special envoy for Yemen, Hans Grundberg, began his role in September 2021. The UN, the US, and Oman led negotiations between the Houthi armed group, Saudi Arabia, and the Yemeni government but made little progress. The UN Security Council continued to enforce the UN sanctions regime against just one party, the Houthis, despite numerous violations of the laws of war by the Saudi and UAE-led coalition.

In February, the European Parliament reiterated its longstanding concerns over the conflict in Yemen, deplored violations of international humanitarian and human rights law by all parties involved, and urged arms exports bans against Saudi Arabia and the UAE. In March, the EU urged an investigation into the tragic death of migrants in a detention center in Sana’a. Over the year, the EU condemned abuses in Yemen and the continued attacks by all parties to the conflict, and intensified diplomatic efforts towards a ceasefire and a political solution.